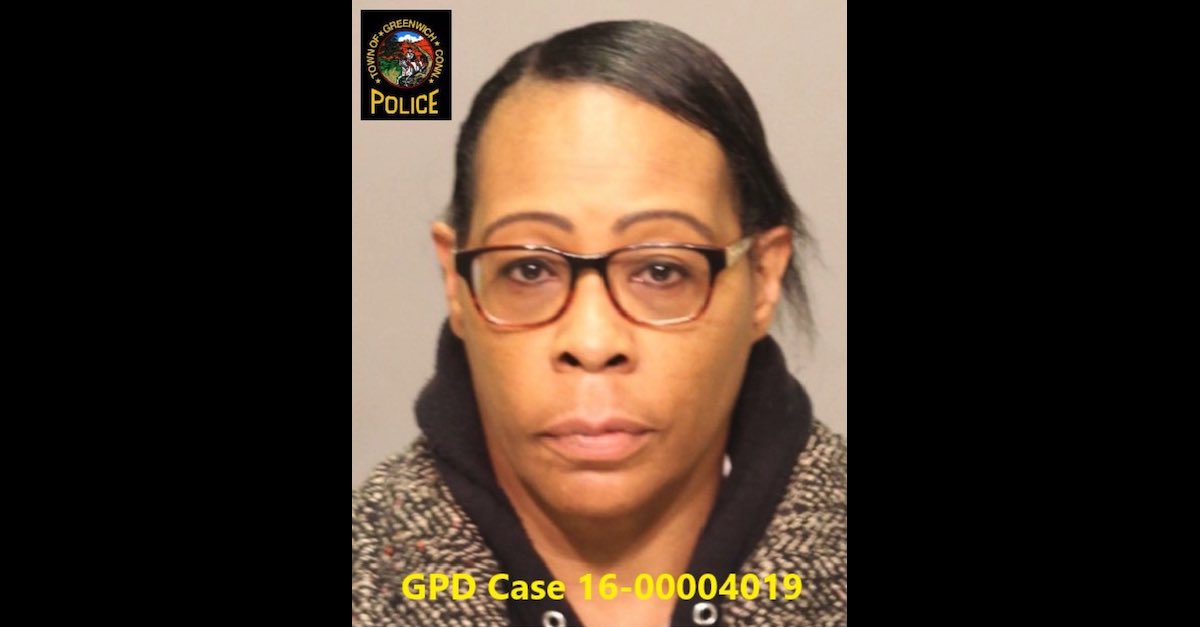 A Connecticut police department on Friday announced the arrest of a woman who allegedly murdered her newborn baby boy some 35 years ago.

Back in 1986, the police department says Phillips was a resident at 27 Havemeyer Place in Greenwich. The sanitation truck “had just emptied a dumpster at the apartment building” where Phillips lived when the baby’s body was discovered inside the truck.

Police dubbed the little boy “Baby John” at the time.

According to 1986 news accounts, the dead baby was discovered with its “placenta and umbilical cord still attached.” The baby boy “weighed 3 pounds, 10 ounces and was born after the mother’s eighth month of pregnancy,” those reports indicated. Authorities said the infant’s body was discovered at about 5:50 a.m. and that it appeared to have been strangled to death shortly after birth. Sixteen detectives were assigned to the case.

The refuse collector who found the baby’s body said at the time that he had feared making such a discovery at some point during his then-12-year career and braced himself for the possibility.

“So when it did happen, I wasn’t as shocked as someone else might be,” he reportedly said to the local newspaper.

Here’s the local paper from the day after a baby boy was discovered dead in a dumpster outside an apartment building in Greenwich in 1986. The coroner confirmed the newborn had been strangled. Now, more than 35 years later, police have arrested the baby’s mother. @News12CT pic.twitter.com/LIOkyXpJXF

The police department said evidence collected from the scene, including “items soaked with blood,” ultimately yielded a link to Phillips, who the deputy chief described as a “parent” of the dead infant.

Interviews conducted in 1986 did not yield enough evidence to “positively identify the killer,” the police said.

At an 11:00 a.m. press conference on Friday, Greenwich Police said that Phillips hid her pregnancy and felt remorseful over the years.  Phillips moved to Florida shortly after killing the baby, police added.

The authorities said Phillips has at least two other children; her attorneys said she has three — one of whom has special needs.

Attorneys for the defendant added that Phillips would be released from custody with a promise to reappear. They told News 12 Connecticut reporter Marissa Alter outside the Stamford, Conn. courthouse Friday morning that Phillips is married, has lived a spotless life, and has worked in the insurance industry since leaving Connecticut more than two decades ago.

Judge allows release with promise to appear. Will not require her to surrender her passport. @News12CT

Deputy Chief Berry assessed the case as follows on Facebook:

We are grateful that justice is finally being obtained for this infant child of our community. The investigation of his tragic death has taken many long years, but he has always been remembered and we hope this conclusion will bring him peace and recognition. Each and every life has meaning and we will always pursue every avenue in the pursuit of justice. We would like to recognize our outstanding partners in this lengthy investigation from the Seminole County Sheriff’s Office, the Florida State Attorney’s Office, the Connecticut State’s Attorney’s Office in Stamford and the Connecticut State Lab-Division of Scientific Services. There have been many Greenwich Detectives over the last thirty-five years who have investigated this case to the extent of the resources available to them, but I would like to especially single out the work of Greenwich Police Detective First Grade Christy Girard whose tireless efforts, investigative skill and ingenuity brought this investigation to a successful conclusion.

Attorneys for the defendant noted that the police misspelled the defendant’s name in press releases. It is spelled Phillips, they said. The police listed her last name as “Philips.” Law&Crime has used the spelling provided by the defense team.