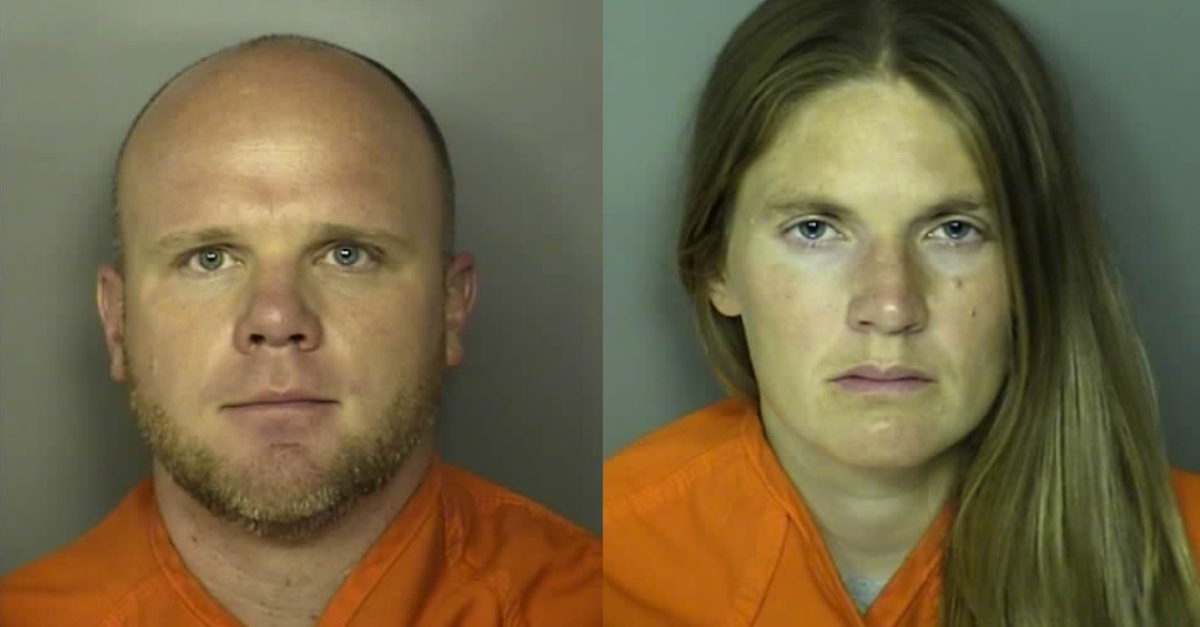 It’s back to jail for a fired deputy coroner who allegedly kept communicating with his co-defendant despite his bond conditions.

Christopher Allen Dontell, 38, returned to lockup Thursday at 4:40 p.m., according to online records from the Horry County Sheriff’s Office in South Carolina. Now both he and Meagan Marie Jackson, 36, must remain behind bars as they face charges for allegedly murdering Gregory Vincent Rice, 46, who shared four children with Jackson.

The two defendants had an affair, prosecutors said during a November 2020 bond hearing, according to WPDE. They allegedly met as Jackson worked for a company that delivered bodies to a funeral home.

Rice was reported missing last Oct. 5 and turned up dead Nov. 8 along the Little Pee Dee River near Pitts Landing off Highway 378. Zachary Rice, Gregory’s adult son, sued Jackson and Dontell as the killers, saying he was filing in part on behalf of his four minor siblings.

“Plaintiff is informed and believes that on or about October 2, 2020, Defendant Jackson and Defendant Dontell acted in concert to murder the Decedent, Gregory Vincent Rice,” the lawsuit stated.

Dontell, who was fired from the Horry County Sheriff’s Office after Gregory Rice’s body was discovered, allegedly kept communicating with Jackson over the phone and through text messages even as they faced charges together of murder and criminal conspiracy.

The court revoked Jackson’s bond first, with prosecutors also saying she went to areas restricted under the terms of her home confinement. She could only leave for work, medical issues, court, or meet with her lawyer.

“On numerous occasions, defendant’s GPS monitor has shown her at retail establishments or other locations not tied to work, court, speaking with her attorney, etc.,” the state wrote in a motion obtained by WMBF.

A friend spoke warmly of Gregory Rice. Jen McKeown, who knew Rice since he was age 10 and was formerly married to his brother Tim Rice, told WPDE that she began losing touch with Gregory when he moved to South Carolina but she said the loss hit her hard.

“Thank you for being a wonderful brother, and for everything you did for me and our children, and you are a great spirit,” McKeown said, when asked what she would tell him if they could speak one more time.