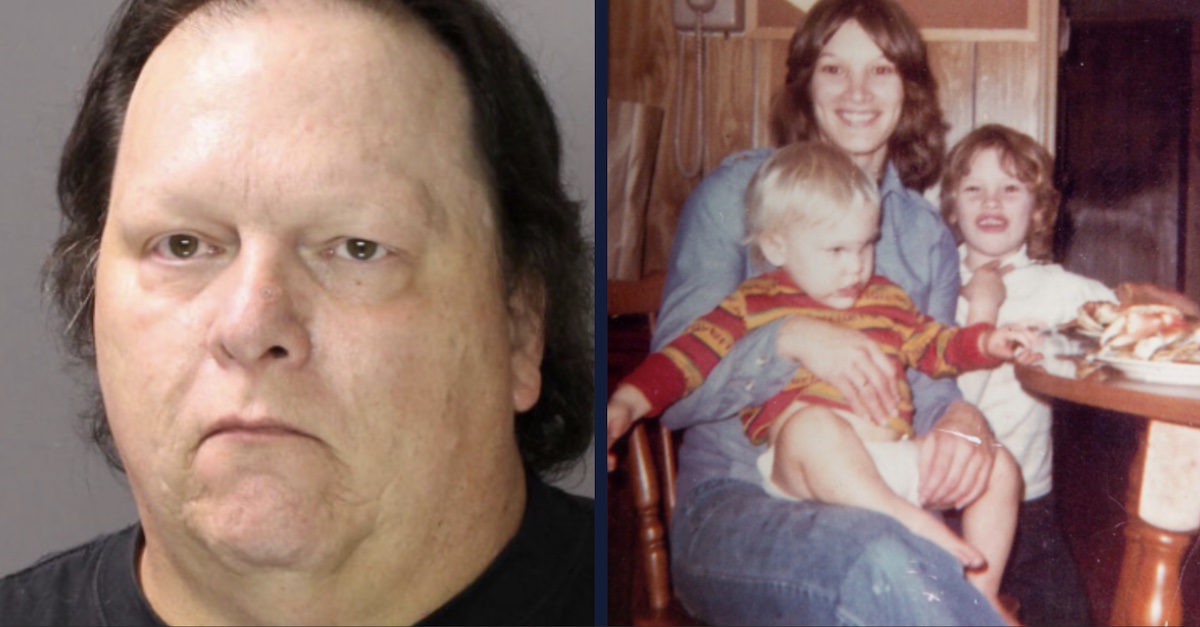 A 56-year-old Pennsylvania man is under arrest following a grand jury probe into the 1991 murder of Joy Hibbs. Prosecutors in Bucks County say that Falls Township’s Robert Francis Atkins was caught due to crucial information provided by his ex-wife.

Authorities allege that Atkins murdered the 35-year-old wife and mother in her home on April 19, 1991—in broad daylight—by stabbing her and strangling her with an electrical cord. Prosecutors say that Atkins, a former police informant in drug cases, “used to live two doors away from” Hibbs and her husband, and was “known to occasionally sell marijuana” to them, according to a press release.

According to the complaint, which you can read in full below, Atkins murdered Hibbs and then set her home on fire.

Investigators initially thought the fire was accidental, but an ensuing autopsy soon gave authorities reason to believe a murder and arson had taken place. Still, naming Atkins as a suspect proved elusive—even though he was “interviewed by police at least twice, but always denied any involvement in her murder.” One interview happened two days after the crime.

Another interview happened in 2014, while he was aware that investigators had “conducted a surprise interview” of his ex-wife April Atkins days earlier. Both April and Robert provided a story about taking a trip to the Poconos with their kids on the weekend of the murder. Robert Atkins allegedly only admitted having a dispute with the victim about marijuana.

April Atkins, for her part, told the detective she had never been interviewed before about Hibbs’ murder.

In 2016, April came forward and made a “recorded statement implicating her husband in the murder of Joy Hibbs,” authorities said.

“She indicated the Friday the Joy Hibbs was murdered, her husband, Robert Atkins, came home covered in blood, and admitted that he stabbed someone and lit a house on fire,” the complaint said. “She said she was told to pack the kids up and call out of work and then they fled to the Poconos. She said that they returned home the Sunday after that’s when she learned of Joy’s murder.”

April allegedly said she didn’t volunteer this information before because she feared for her own safety and the safety of her youngest son, Gabriel, who was still living with her ex.

In December 2021, April agreed to participate in a wiretapped phone call. The “ruse” was to call Robert up on the phone while Detective David Hanks was listening and tell him that police were close to finding out that he confessed. April told Robert cops were questioning her and a roommate she had confided in about the confession.

According to the complaint, Robert Atkins reacted by saying several things, that last of which proved to be 100-percent correct: “You already said a fucking enough, don’t say anything!”; “This ain’t China, they can’t force you to talk”; “They have the 5th Amendment for a reason”; “The phone is probably being tapped right now.”

Those “intercepted communications” were eventually played for the grand jury, which was empaneled the month after the December phone call. But Atkins also allegedly said: “I explained everything to Gabriel.”

In April 2022, Gabriel testified about his father’s alleged reaction to the possibility that investigators were closing in.

“I am afraid I am getting arrested for something that happened a long time ago,” Gabriel recalled the suspect saying.

District Attorney Matt Weintraub said Hibbs’ loved ones knew her as “the perfect mother and wife.”

The Hibbs family released a statement calling a Joy a “charming southern girl” and “devoted mother, wife, and medical assistant”:

Joy Hibbs was a sweet, charming southern girl from central Florida. A loving and devoted mother, wife, and medical assistant. She was highly regarded and loved by her friends, neighbors, and co-workers alike.

On April 19th, 1991, she was brutally murdered in her own home in broad daylight. Stabbed five times in the chest and neck and strangled with an electrical cord. Her body and our family home were intentionally set on fire in an attempt to make this horrific crime disappear.

We would like to thank District Attorney Matt Weintraub and Chief Deputy DA Jennifer Schorn and Detective David Hanks for pursuing this case. We especially want to thank Detective Michael Slaughter of the Bristol Township Police department for his tireless effort in investigating this case and seeking justice for our family.

We are grateful for the outpouring of love and support from the community and ask that you respect our privacy during this difficult time.