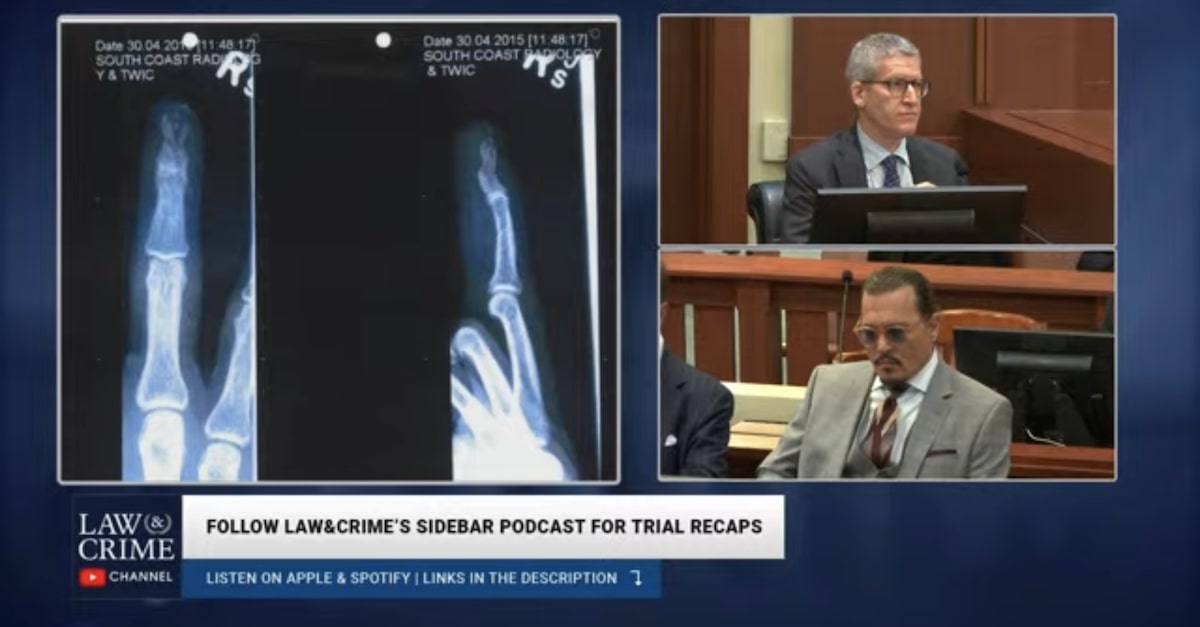 An orthopedic surgeon called by Johnny Depp found the actor’s account of how he lost his fingertip plausible—and Amber Heard’s counter-explanation “highly unlikely.”

His testimony on Thursday reached a diametrically opposite conclusion that was reached by a similar expert called by Heard, setting up a battle of the experts for when the case goes to a jury.

Dr. Richard Gilbert, a New York-based hand specialist with Northwell Health, served as the last witness for Depp’s rebuttal case on Thursday. Gilbert answered testimony by Dr. Richard Moore, who tried to discredit the Pirates of the Caribbean star’s testimony that a shattered bottle thrown by Heard severed his fingertip.

“I miss it,” Depp recently reminisced on witness stand, referring to his intact finger.

Both Gilbert and Moore inspected the same X-rays taken in Australia in March 2015, showing different views of Depp’s detached digit.

It is undisputed that Depp and Heard had been fighting around that time and that one assaulted the other with a liquor bottle.

From there, the former couple’s stories diverge wildly. Heard claims that Depp swallowed some eight to 10 capsules of MDMA, over the course of a three-day violent battle. The Aquaman actress claims that Depp smashed a wall-mounted phone to smithereens, which she said sliced off his finger. Heard also said Depp held her down by the neck to a bar and raped her with a liquor bottle.

Depp denies those allegations, claiming that Heard assaulted him with a vodka battle that she threw at him. He asserts that it shattered with his hand wrapped around the bar, slicing his fingertip off in the process.

On Thursday, Gilbert credited the plausibility of that account, though he cautioned that no expert could form a definitive answer.

Asked why he found Heard’s explanation implausible, Gilbert added: “It is extremely rare to see an injury to the tips of the fingers which is seen with Mr. Depp’s injury.”

“Generally, you’re holding something with a fist, and that in general leads to injuries most commonly of the knuckles here, or fractures that metacarpal as we call these box are fractures,” Gilbert said. “Second, most common after those would be injuries to these—but as you can see, if you’re holding something and hitting against something, it’s very unlikely that the tips of the fingers will be injured. In addition, just taking into account the radiographs and the pictures of the injury, I would not believe that a blunt force—solely a blunt force against a wall—would result in the soft tissue loss.”

On cross-examination, Gilbert acknowledged receiving $1,000 an hour from Depp’s defense team. That is equivalent to the salary that Moore received from Heard’s team for his research, though Moore’s rate for his time specifically on the witness stand was $5,000 an hour.

When he testified, Moore noted that Depp’s medical records showed no other lacerations other than the injury to his fingertip, which he found inconsistent with an injury from a bottle that supposedly shattered.

Heard’s mental health expert Dawn Hughes reached the opposite conclusion, and she re-stated those opinions on her counter-rebuttal testimony. David Spiegel, a board-certified psychiatrist called by Heard’s team, went farther to peg Depp as displaying signs of narcissism. Depp’s expert claimed that Spiegel violated the so-called Goldwater rule, forbidding mental health professionals from offering opinions of people they have not personally examined.

Curry examined Heard, but Spiegel did not have the same access to Depp, due to pre-trial rulings in Depp’s favor, as he is not seeking emotional damages.

Depp sued Heard over her 2018 Washington Post editorial stating that she became a “public figure representing domestic abuse” two years earlier, when she sought a restraining order against the actor. Heard countersued after Depp’s attorney Adam Waldman described her allegations as a hoax.

Closing arguments in the case are expected to take place on Friday.