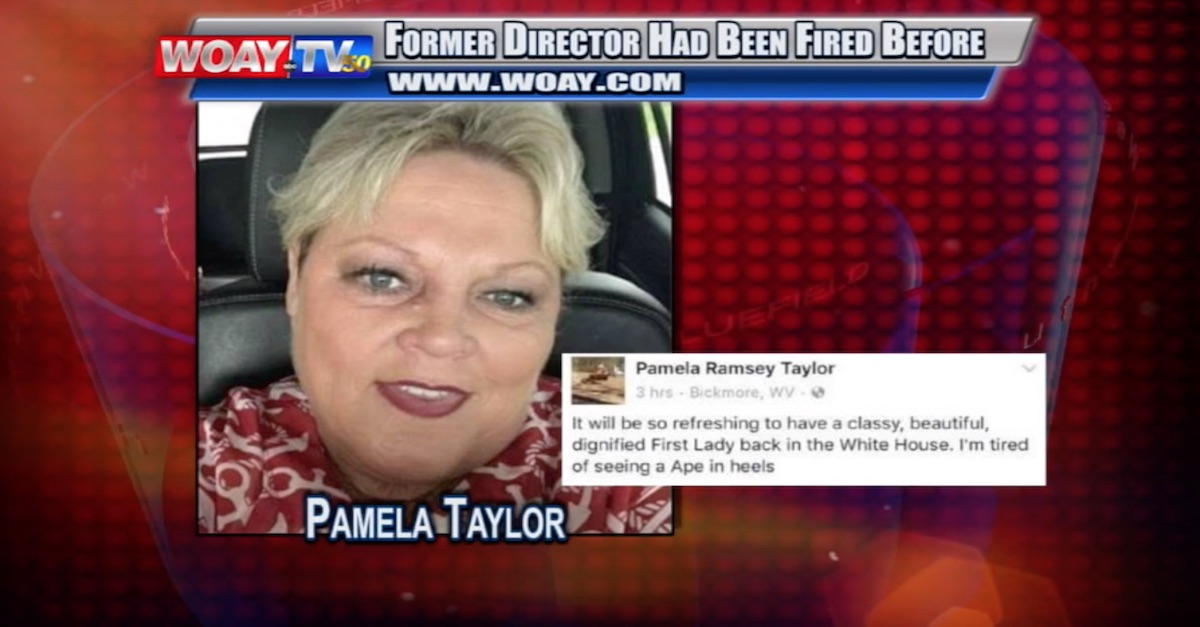 A former West Virginia county official who made headlines in 2016 for her racist online post about then-First Lady Michelle Obama was sentenced to prison Thursday for the embezzlement of disaster relief funds.

Pamela Ramsey Taylor, 57, the former director at the Clay County Development Corporation, a West Virginia-based elderly non-profit group, was sentenced to 10 months in federal prison and fined $10,000 for admitting that she falsely registered for Federal Emergency Management Agency (FEMA) disaster benefits, according to a report from local news outlet WSAZ.

Taylor’s sentence also mandates her to pay restitution of $18,149.04; she will be confined to her home for two months after her release. Three years of supervised release will follow.

According to investigators, Taylor falsely claimed her primary residence was damaged and that she had to stay in a rental unit due to a flood that killed 23 West Virginians in 2016.

“Taylor’s fraud scheme diverted disaster benefits from our most desperate and vulnerable, those most in need of help,” the statement continued.

Taylor made headlines for all the wrong reasons back in 2016. She posted the following on Facebook: “It will be refreshing to have a classy, beautiful, dignified First Lady in the White House. I’m tired of seeing an ape in heels.” The Mayor of Clay County at the time, Beverly Whaling, responded to her post saying, “Just made my day Pam.”

The post was shared thousands of times. It resulted in a petition of nearly 2,000 local signatures, demanding that both women be fired from their jobs. Taylor eventually deleted the post and replaced it with an apology which she later amended, telling WSAZ she wanted to “make it less inflammatory.”