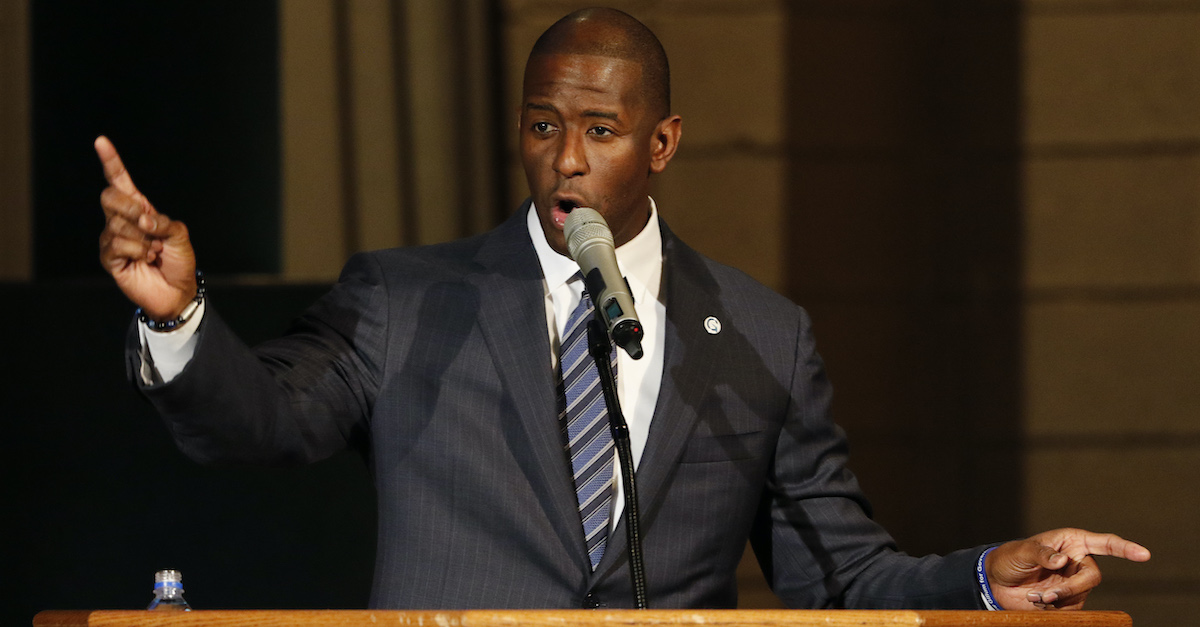 Andrew Gillum, the 42-year-old former Democratic gubernatorial candidate from Florida, was charged by federal prosecutors on Wednesday in a massive indictment accusing him of wire fraud and lying to the FBI.

The 21-count indictment charges Gillum and his longtime associate Sharon Janet Lettman-Hicks with unlawfully soliciting and obtaining funds from various entities and individuals. Each faces 19 counts of wire fraud, and Gillum stands accused of two additional counts of false statements to the FBI.

Before his failed run for Florida governor, Gillum served as the Commissioner of the Tallahassee City Commission between 2003 and for most of 2014. He ascended to mayor of that city between November 2014 and November 2018.

Florida Gov. Ron DeSantis (R) narrowly defeated Gillum in the election in 2018. Then, Gillum withdrew from politics two years later after being found “inebriated” in a hotel room with a man suspected of having a methamphetamine overdose.

Gillum has retained prominent Democratic Party attorney Marc Elias, who intends to argue that his client is innocent.

“The government got it wrong today,” Elias wrote in a statement. “The evidence in this case is clear and will show that Mr. Gillum is innocent of all charges. We look forward to putting this case to rest and giving Andrew and his family peace of mind once and for all.”

Gillum echoed those sentiments in a separate statement.

“I have spent the last 20 years of my life in public service and continue to fight for the people,” Gillum said. “Every campaign I’ve run has been done with integrity. Make no mistake that this case is not legal, it is political. Throughout my career I have always stood up for the people of Florida and have spoken truth to power. There’s been a target on my back ever since I was the mayor of Tallahassee. They found nothing then, and I have full confidence that my legal team will prove my innocence now.”

The allegations of the previously sealed 26-page indictment, which was dated June 7 but revealed on Wednesday, start in the year 2016, when Gillum was collecting a $70,541.48 salary from the city and a separate $122,500 salary from another organization.

Early that year, Gillum encountered two undercover FBI agents who were in the midst of a public corruption organization, prosecutors say. One allegedly posed as a developer for a company operating under the name Southern Pines Development LLC.

On March 25, 2016, an unidentified “Individual A” solicited a $5,000 campaign contribution from that operative to Gillum’s then-newly formed Forward Florida Political Action Committee, and then offered a dinner meeting with Gillum—with the operative paying, according to the indictment.

Prosecutors say that Gillum met with both operatives in New York in August 2016.

“During the trip, the [operatives] paid for Gillum’s lodging at the Millennium Hilton hotel, food and drink, a boat ride around New York Harbor, and a ticket to the Broadway show ‘Hamilton,'” the indictment says, alleging that Gillum never reported those gifts.

That alleged go-between told authorities that he had an agreement with Gillum to discuss everything in person, rather than over the phone, according to the indictment.

“On or about June 14, 2017, Gillum voluntarily agreed to speak with FBI agents,” the indictment states. “During the conversation, Gillum falsely represented that Southern Pines representatives never offered Gillum anything or gave to Gillum anything, and that Gillum stopped having communications with Southern Pines representatives about the campaign contributions following their attempt to link the campaign contributions to support for potential projects in Tallahassee.”

Gillum‘s false statements charges carry a five-year maximum sentence and the wire fraud charges carry 20-year maximums. Both are scheduled to appear before a magistrate in the Northern District of Florida at 2 p.m. Eastern Time.