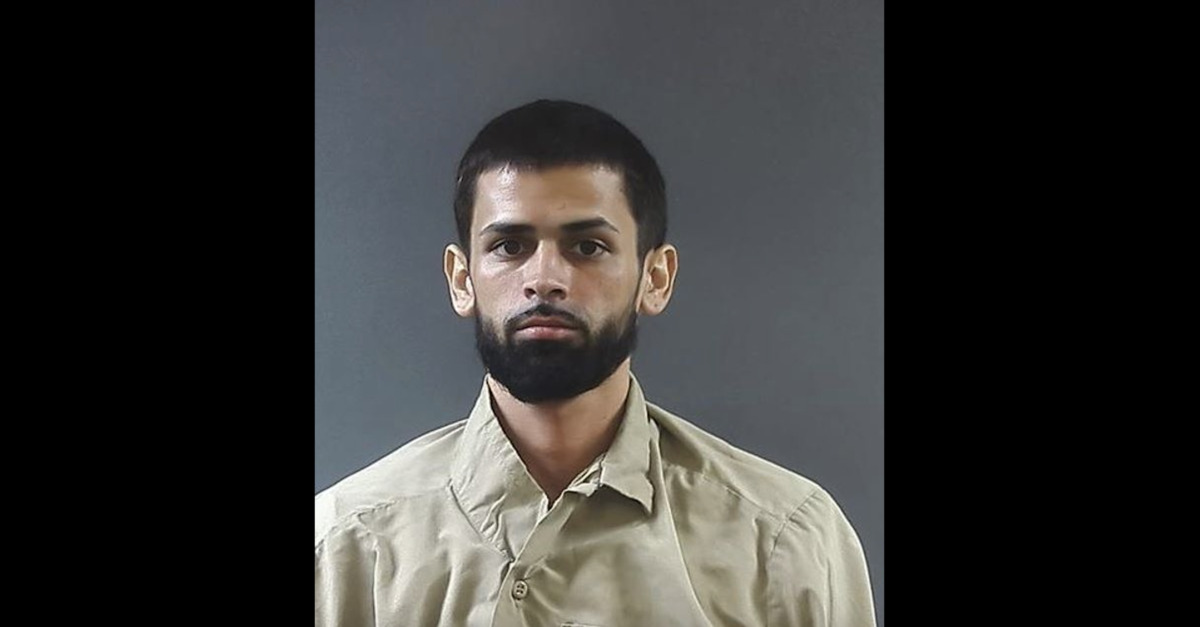 An Indiana man was arrested on Tuesday evening in connection with the weekend deaths of a married septuagenarian couple.

Austin Kusturin, 28, stands accused of two counts of murder over the slayings of 74-year-old Elizabeth Hall and her husband, John Hall, who is also 74 years old, according to the Indiana State Police.

The deaths of the Halls is punctuated by at least one bitter irony, according to various local media outlets. Elizabeth Hall reportedly spoke with Bill Curtis, the mayor of Mount Vernon, Indiana, about “public safety concerns” just days before she was killed.

The defendant has been charged with what authorities described as a “Level A Felony” in the Hoosier State, which, unlike most U.S. jurisdictions, does not make a distinction between different forms of murder (such as first- and second-degree) in their homicide statutes.

A Law&Crime review of Indiana court records suggests the defendant, or at least someone with the same name, has a lengthy criminal history in the midwestern state–including charges of auto theft, domestic battery in front of a child under the age of 16, battery causing injury, and false reporting of a crime. No court case regarding the alleged murder charge, however, has been filed as of this writing.

Kusturin was taken into custody without incident outside of an apartment in Mt. Vernon around 6:30 p.m. on Tuesday, police said.

Multiple outlets have reported that ISP Sergeant Todd Ringle said on Wednesday that Kusturin was arrested on probable cause for both alleged murders. Formal charges are said to be forthcoming in Posey County, Ind.

Posey: Last night, ISP detectives arrested Austin Kusturin, 28, of Mt. Vernon, in connection with the murder of John and Elizabeth Hall. This is still an ongoing investigation. pic.twitter.com/Nbb0XzkoWa

According to the ISP, details about the two alleged murders are intentionally scarce and additional information is currently being withheld from the public because the investigation is ongoing.

The Halls were both discovered dead inside their own Mt. Vernon home on Nov. 6 by a relative who stopped by to check on “their welfare,” according to the ISP’s original press release.

“When they entered the residence, they discovered their parents were deceased,” the ISP said.

Authorities quickly claimed they discovered evidence that indicated foul play in the couple’s death and began a homicide investigation.

The ISP and Mt. Vernon Police are now treating this investigation as a homicide. A husband and wife were found deceased inside the residence. Foul play is suspected. Autopsies are scheduled for tomorrow. pic.twitter.com/FLp5Ph30qe

“Autopsies were conducted the following day,” the ISP noted in that initial press release. “The manner of death was ruled a homicide.”

No details regarding the cause of death have been released. Similarly, a motive for the slaying of the elderly couple has not, as of this writing, been made available or speculated upon by law enforcement.

“We do want to reach out to the public and ask for help,” Ringle told local NBC affiliate WFIE just after the couple’s bodies were found. “We need people to come forward and give us information. If they would happen to have been in the area last night and they saw something, it’s important to call 911, talk to the detectives and give them that information.”

The defendant is currently being held without bond in the Posey County Jail.