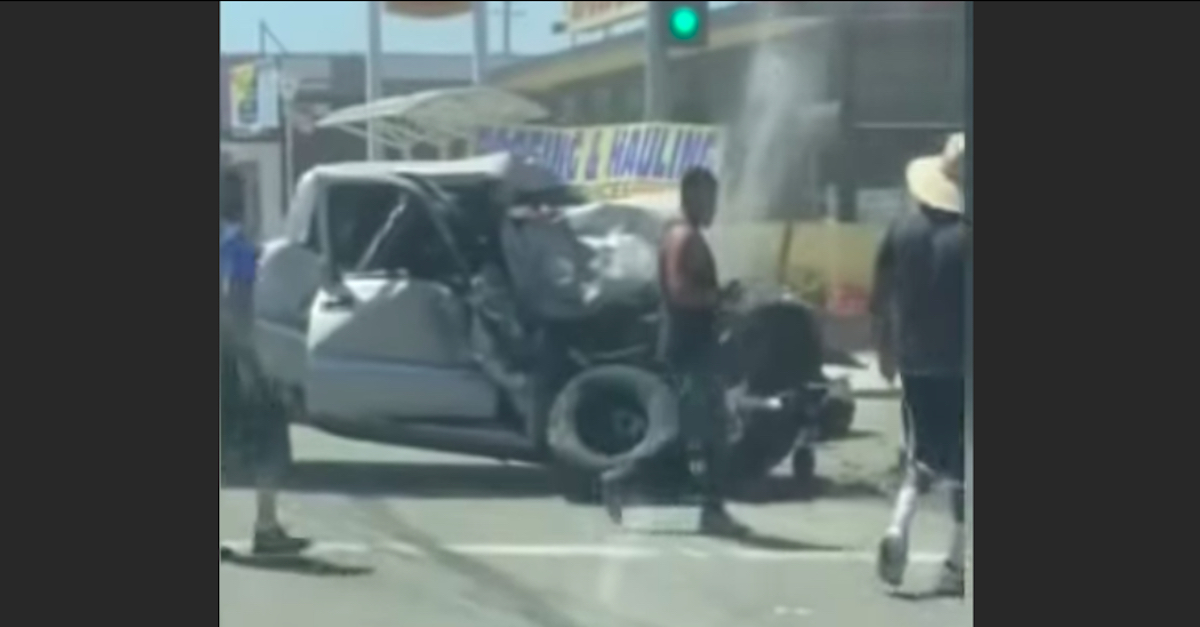 Accident scene where Krista Nichols and her unborn child died

A California driver suspected of driving while angry and intoxicated sparked a multi-car crash in a fit of road rage that killed a pregnant woman and her unborn child just weeks before her expected delivery date, police claim.

According to the Long Beach Police Department (LBPD), 26-year-old Miguel Larios drove his 2006 GMC pickup truck “at a high rate of speed” at approximately 11:30 a.m. when the incident occurred. Larios’s girlfriend, 23-year-old Krista Nichols, who was approximately eight-months pregnant, sat in the passenger seat and his 10-year-old son whose name has not been released was in the backseat.

As Lario allegedly engaged with the second driver, a 45-year-old man in a Toyota Corolla was parked several blocks ahead on the same road and preparing to leave the area. As he pulled away from the curb, his Corolla collided with Larios’s GMC, causing Larios to lose control of the vehicle and ram into an unoccupied parked car.

A witness who was working across the street from the scene of the accident told the Long Beach Post that immediately after the crash, about 20 bystanders “rushed and tried to help” Nichols, who was trapped inside the badly damaged vehicle. Firefighters were able to remove her after several minutes using the Jaws of Life to cut into the mangled GMC pickup.

Officers and first-responders arrived on the scene at approximately 11:36 a.m. and found that Larios and his son had suffered non-life-threatening injuries but that Nichols and her unborn child had sustained critical injuries.

She, who also had a 5-year-old child not involved in the tragic crash, was taken to a local hospital where she and her unborn child were pronounced dead, police said.

Larios was taken into custody and charged with two counts of gross vehicular manslaughter while intoxicated, one count of driving under the influence, and one count of child endangerment. His bond was set at $200,000.

As for Larios, Andrade said he was “trying to forgive” his daughter’s boyfriend but added that right now, “I don’t even want to hear his name.”

Police asked anyone with information about the crash to call detectives Joseph Johnson or Kelsey Myers at 562-570-7355. Anonymous tips can also be submitted through Crime Stoppers by calling 1-800-222-8477 or visiting www.LACrimeStoppers.org.