District Attorney Was Stabbed by His Daughter When She Was in Middle of Mental Health Crisis: Police 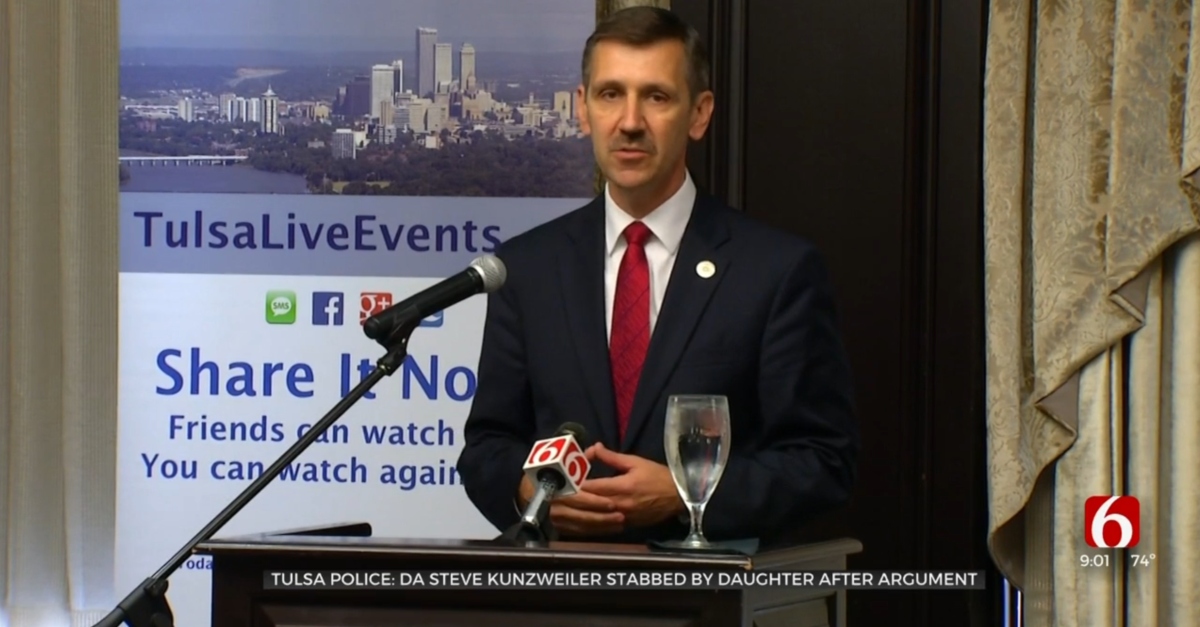 A top prosecutor in Oklahoma was stabbed by his daughter when she was in the middle of a mental health crisis, police say.

Tulsa County District Attorney Steve Kunzweiler survived his injuries. The DA is now out of the hospital, he said in a statement released through his office.

“Unfortunately today, I found myself in a situation that I hoped would never happen,” he said in a statement obtained by Law&Crime. “Fortunately, my injuries are such that I am able to go home. Thank you to everyone who expressed concern for me and my family. I am most appreciative of the response from the Tulsa Fire Department, EMSA, the Tulsa Police Department and the Tulsa County Sheriff’s Office. I am also very grateful for the professionalism and care of the staff and doctors at Saint Francis Hospital in treating me for my injuries.”

@TulsaPolice have arrested Jennifer Kunzweiler in they stabbing incident. She is the daughter of District Attorney Kunzweiler. Detectives are continuing to gather evidence.

“Tulsa County District Attorney Steve Kunzweiler was allegedly stabbed more than once by an adult family member on Tuesday afternoon,” Kunzweiler’s office said before his statement, according to KOKI. “Mr. Kunzweiler was immediately taken to the hospital by emergency services. All relevant police authorities are aware of the situation and are conducting their investigations presently. Mr. Kunzweiler was awake and talking on the way to the hospital and is expected to recover from his injuries. The entire Kunzweiler family would appreciate your prayers and concerns as they go through this struggle. They would also appreciate your concern for their privacy at this time.”

Wow. Tulsa County District Attorney Steve Kunzweiler was hospitalized today after allegedly being stabbed “more than once” by “an adult family member.” pic.twitter.com/X35SRGGtw1

DA Kunzweiler had called authorities, telling dispatchers his daughter stabbed him, said Tulsa Police Capt. Richard Meulenberg, according to KOTV. The injuries were not life threatening, he said. Authorities also took the DA’s daughter to the hospital for self-inflicted injuries. She was arrested, the police chief said on Twitter.

She had experienced a mental health crisis, Capt. Meulenberg added.

He said police will not treat this matter differently because it involved the district attorney. He noted, however, that the mental health component of the case complicates things.

“So we have our family violence detectives here on this location and we’re going to determine what the best course of action is,” Meulenberg said. “There’s a delicate balance between just a regular assault and battery and an assault and battery that relates to a mental health crisis.”

The case is expected to land with another district attorney’s office.