Chesapeake Walmart Shooting Suspect Had a Reputation as a ‘Mean and Cruel Supervisor’ but Was ‘Liked by Management’: Lawsuit 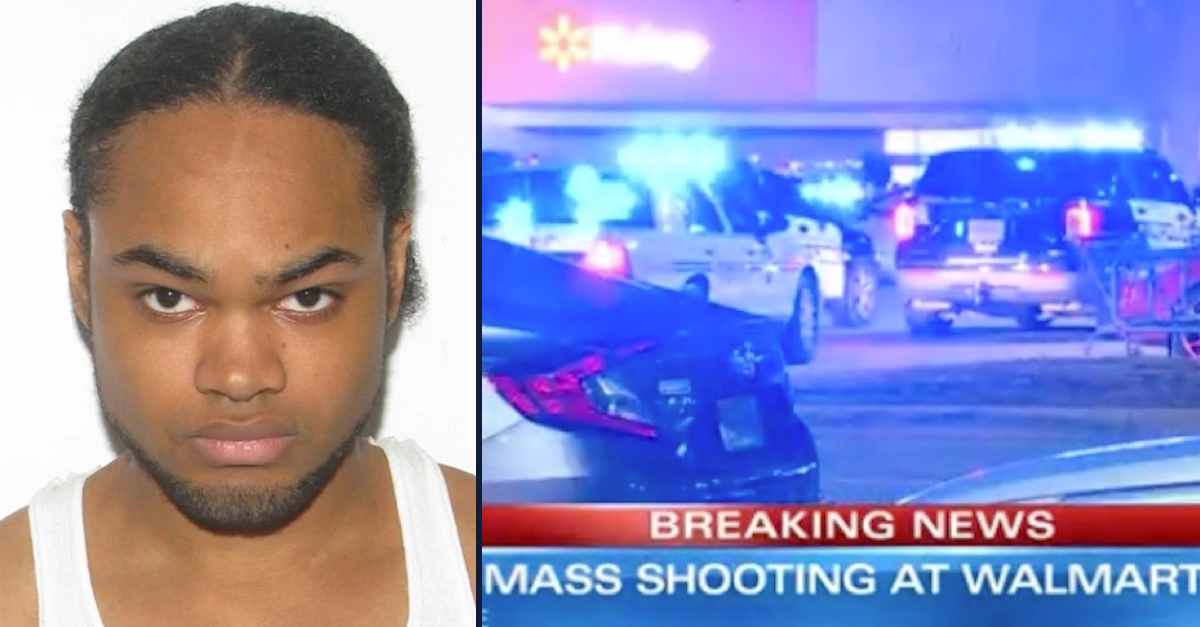 Left: Andre Bing (via Chesapeake Police Department). Right: Police cars are seen outside a Walmart in Chesapeake, Virginia, after a deadly shooting on Nov. 22, 2022 (via YouTube screengrab/WAVY).

A woman who narrowly survived a deadly shooting at a Virginia Walmart has sued the company for $50 million, saying that she had warned her employer of the alleged attacker’s dangerous behavior.

Donya Prioleau was among those people attacked by Walmart employee Andre Bing, 31, on the night of Nov. 22, when Bing allegedly opened fire on store workers gathered in a break room. As Law&Crime previously reported, two people were killed in the attack, and three more succumbed to their injuries after being taken to the hospital.

According to authorities, Bing died that night from a self-inflicted gunshot wound.

“Bullets whizzed by Plaintiff Donya Prioleau’s face and left side, barely missing her,” the lawsuit says of Prioleau’s terrifying experience. “She witnessed several of her coworkers being brutally murdered on either side of her.”

Prioleau had worked at the Chesapeake Walmart since May 26, 2021 as an overnight stocker and trainer, according to the lawsuit. Bing was a “team lead” with Walmart and responsible for managing the overnight stocking crew, including Prioleau, the lawsuit says. He had been with the company since 2010.

Bing had allegedly been “demoted” and “disciplined” by Walmart management for his “improper and disturbing interactions” with others, but he was still retained as team lead for the company despite demonstrating “a pattern of disturbing behavior leading up to the shooting.”

Prioleau says Walmart knew — or should have known — that he was dangerous.

“Mr. Bing’s behavior prior to the shooting put Walmart on notice on that Mr. Bing was violent and could harm others,” the complaint says.

Prioleau’s mother, Brenda Allen, had even visited the store to speak with store manager Alysia Mixon about her concerns for her daughter’s safety.

“Ms. Allen inquired as to whether there were any other measures Ms. Mixon could take with respect to Mr. Bing because it appeared their concerns were falling on deaf ears,” the complaint says. “In response to these concerns, Ms. Mixon informed Ms. Prioleau that there was nothing that could be done about Mr. Bing because he was liked by management.”

Prior to the shooting, Mr. Bing bizarrely asked Ms. Prioleau if he could “borrow her hair.”

Prior to the shooting, Mr. Bing asked Ms. Prioleau if she liked guns.

Prior to the shooting, Mr. Bing had told store employees, including managers, that if he was ever fired, he would retaliate and “people will remember my name.”

Prior to the shooting, Mr. Bing had told coworkers that he ran over a turtle with a lawnmower just to see its guys spray out, which made him hungry and reminded him of ramen noodles.

Prior to the shooting, Mr. Bing told coworkers that the government was watching him. He kept black tape on his phone camera so no one could spy on him.

Prior to the shooting, Mr. Bing repeatedly asked coworkers if they had received their active shooter training. When coworkers responded that they had, Mr. Bing just smiled and walked away without saying anything.

The complaint notes that Bing had a reputation among Walmart employees for being the team lead to “watch out for.”

“It was well known that Mr. Bing had a bad attitude and would retaliate against fellow employees for the smallest perceived slight or inadequacy,” the complaint says. “Mr. Bing was known for being a mean and cruel supervisor.”

The lawsuit also alleges that Bing had a “personal vendetta against several Walmart employees” and kept a “kill list” of potential targets prior to the attack.

Despite all of this, the lawsuit asserts, Bing was allowed to continue working at the store.

“Upon information and belief, Walmart and its managers were aware of Mr. Bing’s behavior and threats, but kept employing him anyway,” the complaint says.

Prioleau alleges that she has been severely traumatized by the experience, suffering from sleeplessness and experiencing flashbacks, severe anxiety, and nightmares since the attack.

“Ms. Prioleau looked at one of her coworkers in the eyes right after she had been shot in the neck,” the complaint says, detailing Prioleau’s horrifying experience of the shooting. “Ms. Prioleau saw the bullet wound in her coworker’s neck, the blood rushing out of it, and the shocked look on her coworker’s helpless face. Ms. Prioleau ran out of the break room as fast as she could. In the process of escaping, Ms. Prioleau fell, injuring her knee and elbow.”

“As workplace shootings and violence become horrifyingly common, employers have a responsibility to understand the warning signs and take threats seriously in order to protect their employees and customers,” attorneys John Morgan and Peter Anderson said in a statement. “Our hearts are broken for the families of those who lost loved ones and for those, like Ms. Prioleau, whose lives will never be the same because of this trauma. We will work to hold Walmart accountable for failing to stop this tragedy.”

Walmart indicated that it had received the complaint but was not commenting on its contents.

“The entire Walmart family is heartbroken by the loss of the valued members of our team,” the company said in a statement emailed to Law&Crime. “Our deepest sympathies go out to our associates and everyone impacted, including those who were injured. We are focused on supporting all our associates with significant resources, including counseling. We are reviewing the Complaint and will be responding as appropriate with the court.”

[Image of Bing via Chesapeake Police Department. Image of scene of shooting on Nov. 22, 2022, via YouTube screengrab/WAVY.]