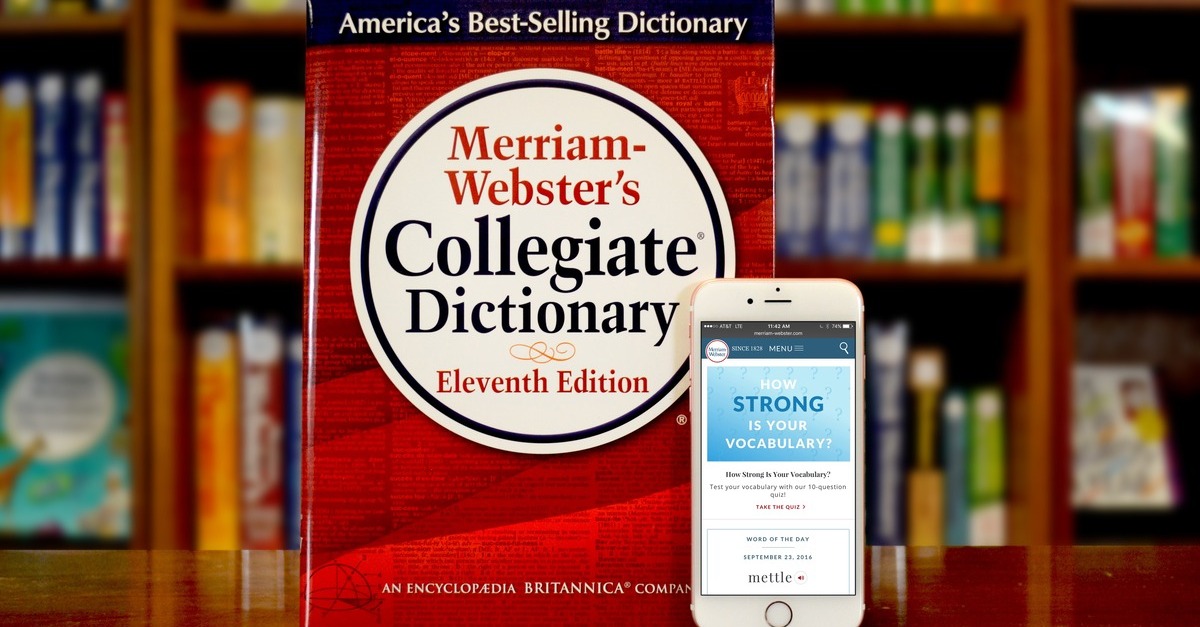 In this handout image provided by Merriam-Webster, Merriam-Webster’s Collegiate Dictionary and mobile website are displayed September 23, 2016 in Springfield, Massachusetts.

A California man has pleaded guilty to threatening a dictionary company and a university president. Though Jeremy David Hanson, 34, only pleaded to charges regarding Merriam-Webster and the University of North Texas, his plea agreement details an extensive history of making politically infused — and usually transphobic or homophobic — threats against people and companies. On top of that, he had spoken to law enforcement several times about his behavior. He fell through on promises to do better.

Sentencing is scheduled for Jan. 5, though prosecutors are not seeking detention ahead of that date.

Hanson’s defense filed materials on Friday to ask for a curfew from 8 p.m. to 8 a.m.

“The parties have conferred and have sought input from Mr. Hanson’s supervising probation officer in California and there is no objection from the government,” the motion stated.

In targets ranging from a New York-based rabbi to DC Comics, Hanson railed about “Marxists” and the transgender community. Again and again, he threatened murder, including by means of firearms and bombs.

“I am going to fucking kill you,” he wrote one DC Comics writer after the company announced that Superman — Clark’s son Jonathan Kent — was bisexual. “I am going to rape your wife and decapitate her then blow up DC Comics headquarters.”

“We are going to have a civil war and EXTERMINATE you cultural Marxists destroying America,” he wrote the author. “TRUMP 2024.”

Court documents indicate that his threats against the Massachusetts-based dictionary company Merriam-Webster fit the same pattern. He responded with unmitigated vitriol regarding the entries for words like “female” and “girl,” which reference gender identity.

“I am going to shoot up and bomb your offices for lying and creating fake definitions in order to pander to the tra[**]y mafia,” he wrote Oct. 8. “Boys aren’t girls, and girls aren’t boys. The only good Marxist is a dead Marxist. I will assassinate your top editor. You sickening, vile tra[**]y freaks.”

“Hope you enjoy getting raped by savage Muslims when Ireland falls to sharia law,” he wrote Irish then-politician Averil Power on that day, according to the plea agreement.

He also threatened on June 1, 2015 to blow up “Wikipedia in San Francisco” to “hunt down” two people he called “anti-Semites.”

The FBI interviewed him at his mother’s side on July 27, 2015. He was a medical psychiatric resident at University of California – Irvine Medical Center, who determined him fit for interview. He repeatedly expressed remorse for those earlier comments and others, and he promised to stop. But authorities said Hanson kept going.

On April 19, 2020, he wrote that he wanted to “go on a shooting spree” in the offices of the American Civil Liberties Union.

“Anyone who promotes the degenerate and horrific tra[**]y agenda is a traitor who needs to be killed,” he wrote on March 2, 2022. “I will personally kill you and shoot up your offices then assassinate Gavin Newsom.”

“The radical Marxist [n-word] mayor should be assassinated for destroying our democracy and allowing non-Americans to vote,” Hanson wrote on Jan. 15, 2022. “NYC council ought to be shot up and bombed. You are all un-American traitors.”

“I am going to shoot up and bomb your headquarters for pandering to the tra[**]y freaks,” he wrote Hasbro. “My Potato [H]ead is male.”

Hanson’s mental health history will likely be a factor in sentencing.

After the IGN and DC threats, Hanson told FBI agents on Oct. 27, 2021 that he experienced obsessive-compulsive disorder, Aspergers, anxiety, depression, and problems with impulse control.

“[Hanson said] He understands the threatening remarks he makes online are illegal, but is unable to control himself or his emotions,” the plea agreement stated. “He is usually able to vent his anger to his mother. However, after his mother has gone to bed, Hanson makes comments online without the added benefit of his mother as a filter or sounding board.”

The plea agreement and the motion to modify the conditions of release are both below: