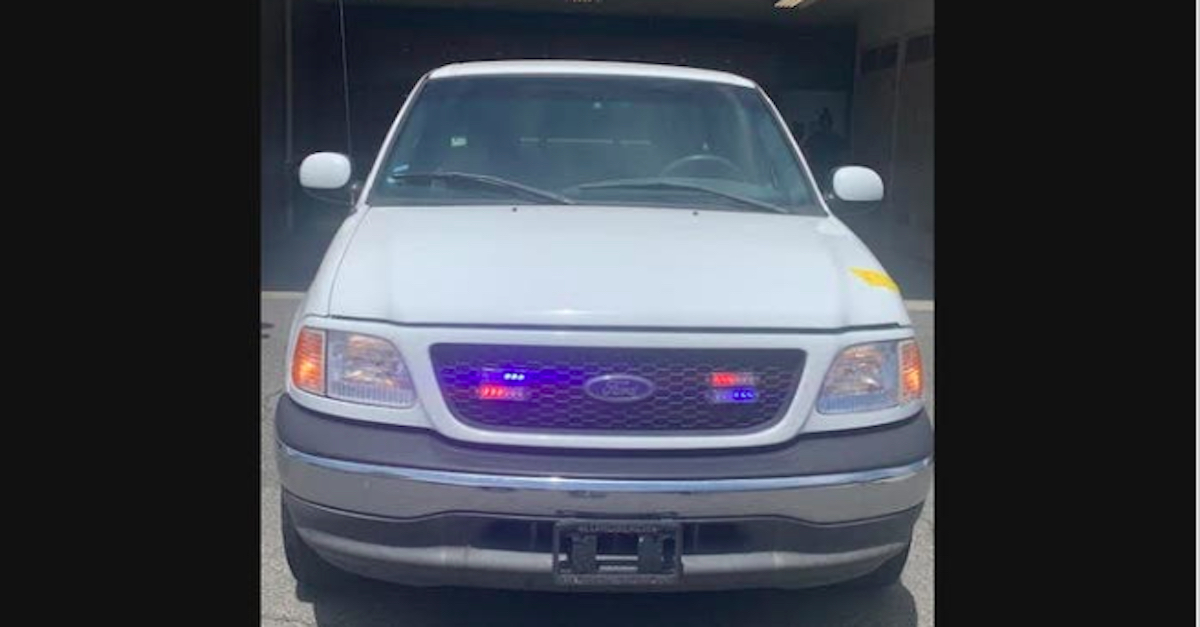 The vehicle allegedly used by Ryan Lee Meeker to impersonate a police officer.

A California man was taken into custody this week for allegedly impersonating a police officer and attempting to make a traffic stop on another vehicle using his own illegally equipped Ford F-150 pickup truck which had a small child passenger inside, the California Highway Patrol (CHP) announced late Wednesday evening.

According to a press release from CHP’s Temecula Division, Ryan Lee Meeker, a 45-year-old resident of San Jacinto, used a white pickup truck—registered in his name and fitted with red and blue light and a siren—to pull over a female driver in the French Valley area of Southern California.

According to authorities, the woman quickly realized that something was not right with the pretend officer and his vehicle, and fled the scene soon after stopping her vehicle. The victim’s car, however, was equipped with a dashboard camera that captured the entire bizarre incident on film, which she then turned over to CHP. Based on the victim’s dash cam footage, investigators with CHP were able to identify the alleged suspect, his vehicle, and his home residence.

At approximately 9:30 a.m. on Wednesday, CHP officers executed a search warrant on Meeker’s home and his Ford F-150, finding it still equipped with the siren as well as red and blue lights in the grille and back window. CHP’s search of the vehicle also turned up “two handguns, an additional light-bar, a total of four badges (marked ‘security’), and a gun belt.”

Following the execution of the warrant, Meeker was arrested on suspicion of impersonating a peace officer. But the alleged presence of a child passenger in the fake police vehicle has also led to charges.

CHP said that due to “the inherent dangers of police work and traffic stops and the fact that the suspect had a juvenile in the vehicle while he made the traffic stop, the additional charges of child endangerment were included.”

According to state jail records, Meeker on Wednesday was processed at the Southwest Detention Center in Riverside County and was released the same day after posting $35,000 bond. He is scheduled to make his first court appearance at the Murrieta Southwest Justice Center on Oct. 18.

Law&Crime was unable to find any previous criminal history for Meeker and did not immediately receive a response from CHP regarding any additional details that may be available about Meeker or the case.

CHP asked that anyone who believes they may have been stopped in the French Valley area by someone driving a white Ford F-150 with white, red and blue lights in the grille, to please call CHP Officer Fenton at 951-506-2000.