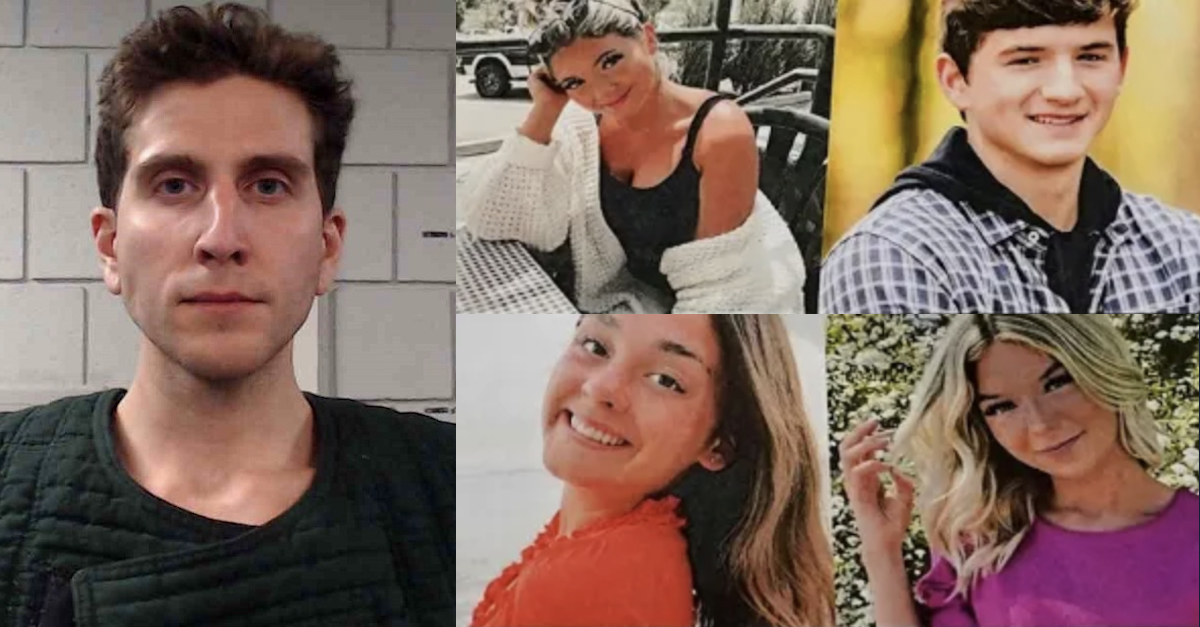 Murder suspect Bryan Kohberger appears in a mugshot; the four victims of the Idaho University Student murder case appear in images supplied by the Kernodle family.

Bryan Kohberger, the man charged with murdering four University of Idaho students, initially waived his right to counsel and agreed to speak with law enforcement following his arrest — but then, he requested an attorney, according to the public defender representing him in Pennsylvania.

Kohberger, 28, was taken into custody just before 2 a.m. last Friday morning at his parents home in Albrightsville, Pennsylvania. He faces four counts of first-degree murder and one count of felony burglary for the deaths of Kaylee Goncalves, Maddie Mogen, Xana Kernodle and Ethan Chapin at a home near campus last November. Kohberger is being held at the Monroe County Correctional Facility until an extradition hearing scheduled for tomorrow.

“He’s calm. He’s fully aware. It’s obvious he’s very intelligent… He already has a Master’s. It shouldn’t shock anyone that he’s intelligent,” said Jason LaBar, chief public defender for Monroe County who will represent Kohberger at what is expected to be a brief extradition hearing Tuesday. Kohberger had just completed his first semester as a PhD student studying criminal justice and criminology at Washington State University in Pullman when he was taken into custody.

Initially, Kohberger waived his Miranda rights but then requested an attorney. LaBar said Kohberger told him that police asked his client if he understood what was going on, and he responded by saying something to the effect of “yes, certainly I’m aware of what’s going on. I’m 10 miles away from this.” Then, LaBar said, Kohberger invoked his right to counsel and asked for an attorney.

Moscow Police said they seized a 2015 white Hyundai Elantra. LaBar confirmed Kohberger drove that vehicle. Police had initially asked last month for any information about a 2011-2013 white Hyundai Elantra and said they had registrations for 22,000 vehicles that matched that description. Police executed search warrants at Kohberger’s apartment in Pullman and seized several items and also searched his parents’ home in Pennsylvania.

Kohberger arrived in Pennsylvania in mid-December, LaBar said. His father flew to Washington to make the drive back with his son in what LaBar said was a trip planned before the start of the school year. LaBar said father and son left Pullman sometime between Dec. 13 and Dec. 16 in an effort to beat the incoming snowstorm. “Bryan isn’t denying he was in Pullman through mid-December,” LaBar said. He also said he assumes law enforcement has his GPS data available through his mobile phone.

Kohberger’s family released a statement over the weekend through LaBar.

“First and foremost we care deeply for the four families who have lost their precious children. There are no words that can adequately express the sadness we feel, and we pray each day for them,” the statement read. “We will continue to let the legal process unfold, and as a family, we will love and support our son and brother. We have fully cooperated with law enforcement agencies in an attempt to seek the truth and promote his presumption of innocence rather than judge unknown facts and make erroneous assumptions.”

Kohberger’s parents cannot afford a lawyer for him, so he will have to have a public defender in Idaho, LaBar said.

Little is known about Kohberger, but former classmates have come forward to share their recollections of him. They requested anonymity after law enforcement requested they not speak publicly about Kohberger.

A man who attended DeSales University in Pennsylvania with Kohberger during their undergraduate studies recalled a tall, awkward student who often spoke over professors in a superior manner.

“Words can’t really describe my shock. It’s pretty surreal,” the man said. He added that he noticed a slight change in Kohberger’s appearance from their undergraduate years. “He definitely looked sort of gaunt and emaciated at this point. A little older,” the man stated.

The former classmate described how he remembered Kohberger in classes.

He added that the desks at DeSales were somewhat small so Kohberger, who stands around 6 feet tall, barely fit in the small desks. He said he viewed Kohberger as an outcast because he was clearly someone who was very interested in criminal justice in a deep way but didn’t take part in the extracurricular activities surrounding the major such as the Criminal Justice Club and a criminal justice conference many of the other students attended. While Kohberger willingly spoke in class, he didn’t socialize with other students in the major outside of class.

“He’s definitely articulate but stuck on minor details and pointing out flaws in what he professor was saying. Sometimes he made good points. There times people were like ‘can you please shut up so we can move on? It’s not really relevant,'” the former classmate recalled.

The DeSales graduate said he was in two classes with Kohberger: one about criminal theory taught by Michelle Bolger, PhD and a second taught by Katherine Ramsland, PhD that focused on serial killers. The DeSales alumnus said in Bolger’s class, Kohberger would sometimes talk over the professor. Ramsland told Law&Crime over the weekend that she is not making statements to the media at this time.

The former student said the class on serial killers focuses on the psychology and the anatomy of the brain and that the material was presented professionally and deftly. Bolger has not responded to an email seeking comment.

Another former DeSales student said she didn’t know Kohberger well but remembered him in their Master’s program as being “quiet and a bit strange.” The woman added, “He kept to himself and had a deadpan look in his eyes if you looked at him.”

Meanwhile, an undergraduate student at Washington State University recalled taking a class last semester where Bryan Kohberger was a teaching assistant. She recalled Kohberger only being in class three or four times during the semester and her professor, John Snyder, telling the class that Kohberger was a harsh grader. For that reason, she said, she never approached him. She recalled Snyder telling Kohberger to “be nice” when grading and joking that he could be hard on students’ papers.

“He always got straight to the point when reviewing my papers. Pretty blunt,” the student said.

Professor Snyder has not responded to an email seeking comment.

Kohberger’s extradition hearing will be held Tuesday afternoon in Monroe County at 3:30 p.m. Eastern Time. He could be returned to Idaho shortly thereafter.

LaBar confirmed that Kohberger is a strict vegan and that the Monroe County Correctional Facility is making accommodations for his diet. However, LaBar said he is most concerned about Kohberger’s rights as a criminal defendant.

“I do not want Bryan tried in the court of public opinion,” LaBar said. “Let’s wait until the facts come out. Let’s not assume anything… It’s so important you don’t jump to conclusions.”