Newly released body camera footage allegedly shows the moment a Florida woman who had just been involved in a car crash stabbed a responding deputy in the neck with a butterfly knife. Leigha Michelle Day, 21, was apprehended a short while after the alleged attack and charged with one count of attempted premeditated first-degree murder, records reviewed by Law&Crime show.

According to a probable cause affidavit, deputies with the St. Lucie County Sheriff’s Office at approximately 11 p.m. on Wednesday, March 23 responded to a call regarding a rollover crash that occurred on South Indian River Drive. Prior to law enforcement arriving on the scene, witnesses said a white female wearing a black hoodie had fled the site of the accident.

Authorities began searching for the woman. Per the affidavit, Deputy Cody Colangelo located the woman on the beach running parallel to Indian River Drive.

The footage shows the deputy standing on an elevated dock and calling down to the woman, later identified as Day, who appears to be clearly upset and on the verge of panic as she walks along the beach in direction of the deputy. He tells Day to stop and she can be heard sobbing as she approaches the bottom of the dock steps. 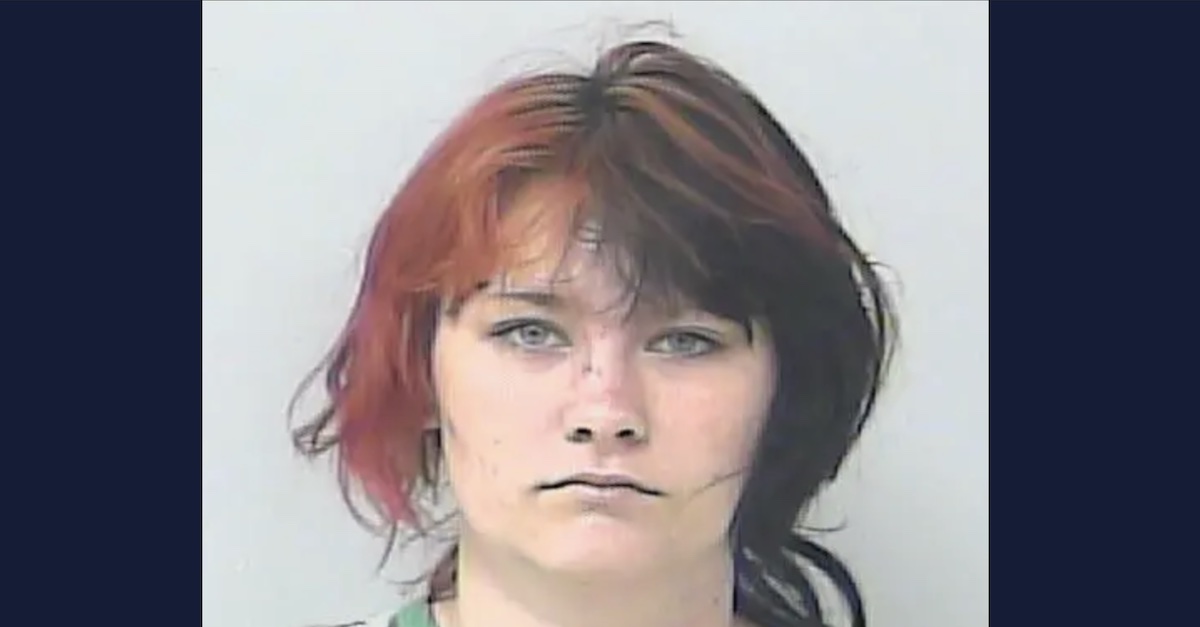 Colangelo asks if Day was just in a crash and she appears to walk away. Colangelo then descends the dock stairs to the beach and tells Day to come back. Still sobbing, she agrees and approaches Colangelo with both hands behind her back.

Colangelo tells her to walk up the stairs so they can get away from the water and Day then leans fully over at the waist, both hands still behind her back, and says, “I don’t want to. I’m scared.” She is still sobbing and appears unstable.

She then agrees to go up the dock stairs. She quickly pulls both of her hands in front of her body as she moves past Colangelo and begins to ascend the staircase. Walking a few feet in front of Colangelo, Day appears to take about ten steps before suddenly pivoting, turning around, and appearing to attack him. Colangelo can be heard shouting before the video cuts out.

Per the affidavit, Colangelo described the weapon Day allegedly used to stab him as “a knife.” Colangelo then drew his firearm and “fired one shot at the suspect who then fled.” “Deputy Colangelo then radioed he had fired the shot and units rushed to him to assist, ” the affidavit says.

Two other deputies quickly found Colangelo at the bottom of the dock stairs. Deputies said he was “holding his neck and bleeding profusely from the left side of his neck.” Fire rescue personnel then arrived on the scene and treated Colangelo, who was then rushed to Lawnwood Regional Medical Center where he underwent emergency surgery for the stab wound.

Deputies located Day standing in waist-high water between two docks just north of where the alleged attack took place. She was arrested and secured with double-locked restraints.

While Day was being cuffed, one of the deputies allegedly heard her say, “I do believe I just stabbed an officer,” per the affidavit. She is described as appearing to be “impaired by narcotics based upon the training and experience of Deputies on scene.”

In a post-Miranda interview with detectives, Day allegedly admitted that she fled the scene of the accident with her wallet and a butterfly knife. She allegedly said she had no car insurance and was scared of going to jail.

“She was initially reluctant to tell what exactly happened,” the affidavit states. “She eventually stated she did stab someone out of fear with the knife she brought. She further explained she did not intend to kill the Deputy, but did want to get away or escape. Ms. Day was cooperative, but very reluctant and not forth coming with information.”

Colangelo is a 2.5-year veteran of the sheriff’s office and comes from a law enforcement family, with both his father and older brother both having been employed by the SLCSO, Chief Deputy Brian Hester said during a press conference on the matter. He is expected to make a full recovery.

“We are so thankful for the doctors and nurses at Lawnwood for the great care they have provided Deputy Colangelo,” Hester said in a Facebook post. “He is recovering well and resting comfortably at home. We also thank our community for the outpouring of support.”