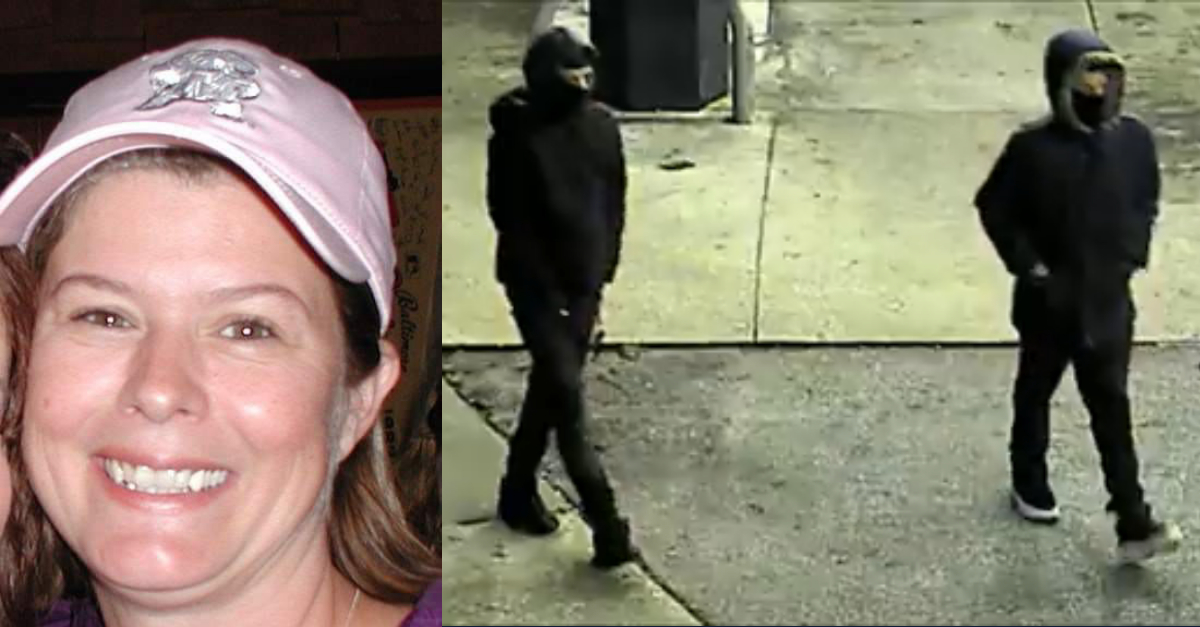 A Baltimore teenager (allegedly seen on right in video with a second suspect) is charged with the alleged murder of Cheryl McCormack.

A Baltimore teenager accused of murdering a DoorDash driver turned himself in to the authorities during early morning hours of Wednesday after detectives obtained a warrant for his arrest, according to the Baltimore Police Department. The suspect is not being named by authorities at this time because he is only 16, which makes him a juvenile in the State of Maryland.

The teen is charged with first-degree murder in the death of Cheryl McCormick, a 51-year-old mother of three and grandmother who had been working on the night in question for the food delivery app DoorDash. McCormick’s alleged murder happened on January 24 shortly after 2:00 a.m., according to the Baltimore Field Division of the federal Bureau of Alcohol, Tobacco, Firearms and Explosives.

The ATF provided a timeline of the alleged events which led up to the fatal shooting:

ATF Special Agents and Baltimore Police Department detectives learned that the victims were working for an app-based food delivery service and their car ran out of gas in the 3900 block of White Ave. on their way to deliver an order. While walking back to a gas station to get fuel for the vehicle, the second victim was approached by two thin, short, black males likely in their mid-to-late-teens. One suspect brandished a firearm and both suspects attempted to rob the victim, then demanding the victim return to the disabled vehicle with them. Upon arriving, the suspects demanded Mrs. McCormack exit the vehicle and give them items of value. When she refused, the suspects shot her and fled.

There were no developments in the case during its first few weeks, but on February 8, ATF Baltimore Acting Special Agent in Charge L. C. Cheeks, Jr. announced a $5,000 reward for any information that would lead to the identification of the two suspects. The agency also released a video of the suspects taken from a nearby gas station just minutes before McCormick’s alleged murder.

ATF, @BaltimorePolice are investigating the murder of a food delivery driver who was fatally shot on Jan. 24 after refusing to give items of value to persons robbing her. $5,000 reward from ATF for info that leads to identification of these suspects. Call 888-ATF-TIPS with info pic.twitter.com/g1LC5uci7J

That video and interviews with “potential witnesses” eventually resulted in homicide detectives with the Baltimore Police Department being able to identify one suspect and obtain a warrant for his arrest, the police said.

“On February 23, 2022 at approximately 12:37 a.m., the 16-year-old suspect turned himself in at police headquarters where he was read his Miranda Rights and transported to Central Booking,” the police department continued.

Under Maryland law, an individual can sometimes be charged with first-degree murder if a killing is not premeditated — depending on the circumstances.  Generally speaking, first-degree murder is “a deliberate, premeditated, and willful killing,” a killing committed by someone who is “lying in wait,” a killing “committed by poison,” or a killing “committed in the perpetration of or an attempt to perpetrate” an underlying offense.  The latter in essence functions similar to a felony murder rule.  The requisite underlying offenses are laid out in the state’s murder statute; they included first-degree arson, certain types of burglary, carjacking or armed carjacking, kidnapping, mayhem, robbery, and a few other offenses.

It is unclear if an arrest warrant has been issued for the second suspect in the case or if detectives have even been able to learn the identity of the other individual in the video. Law&Crime reached out to the Baltimore Police Department’s media relations office but has not received a response back to a request for an update or comment.