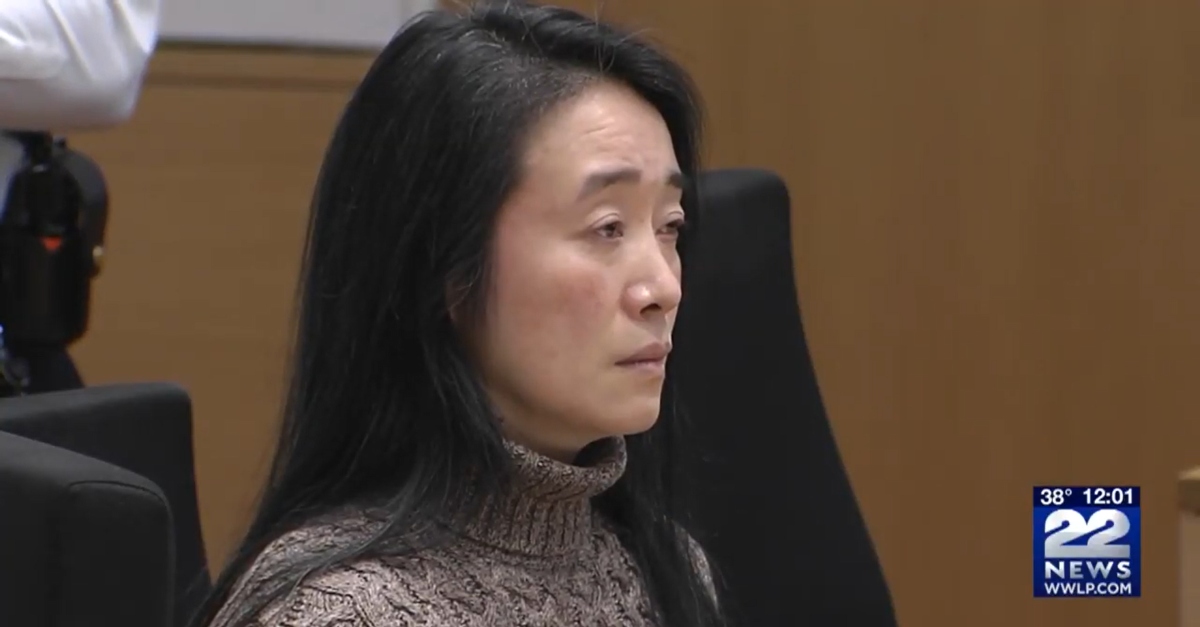 Rie Hachiyanagi in a 2020 bond hearing.

The attempted murder case against a Massachusetts college professor nears its end. Rie Hachiyanagi, 50, who taught art at Mt. Holyoke College, pleaded guilty on Friday to trying to kill a friend in a four-hour attack.

“She expected to get away with murder — my murder,” survivor Lauret Savoy, herself a professor of geology and environmental studies at the school, said in her victim impact statement, according to The Greenfield Recorder.

Assistant District Attorney Matthew Thomas told the court in Greenfield, Massachusetts, that Hachiyanagi arrived at Savoy’s home unannounced late Dec. 23, 2019 and hid until the geology professor realized her presence and asked who was there. Hachiyanagi stepped forward, said she wanted to talk about her feelings but attacked when Savoy turned her back. She told Savoy she loved her for years, insisting the geology professor should have known that. She straddled Savoy and punched her on the floor, the prosecutor said. She also used a fire poker, pruning shears, and a rock in the attack. Savoy said Hachiyanagi taunted her repeatedly by telling her she would be blinded, disfigured, then murdered.

managed to stop her by pretending to share these feelings and got her to call 911, though Hachiyanagi put on a façade for authorities as if she had been the one to save her, according to the prosecutor.

Savoy told the court she sustained nerve damage to her face and two fingers do not work properly. Savoy said she had trouble sleeping, often has nightmares, and has headaches everyday. The attack left her in a “professional coma” and financial pressure because has had to turn down at least 30 professional opportunities, and has not been able to return to teaching. Insurance did not cover all her bills and she had to put money toward a home security system and therapy for post-traumatic stress disorder.

“I’ve struggled to find a word that could hold in its meaning both the attack and my experience of it,” Savoy said, according to WWLP. “The closest I found is this: ‘severe or excruciating pain or suffering (of body or mind); anguish, agony, torment; the infliction of such.’ This is a definition of torture. For four hours I experienced literal torture of body and of mind, not knowing if I would survive the next minute—yet needing to find some way to save my life. The emotional, physical, financial, and professional impacts of this crime have been huge and they continue. Now the defendant’s violation of me is becoming part of a public persona that I did not choose. She has invaded my privacy, my career, my life.”

Sentencing is set for Wednesday. The prosecution wants one to 12 years for each armed assault charge, seven to nine for each count of assault and battery, 10 to 12 years for mayhem, and three years of probation for home invasion, and the entering charge, according to the Recorder. The defense accepted the probation terms but asked for five to seven years for the other counts.

Defense lawyer Thomas Kokonowski told the court his client had been a model prisoner and leader behind bars. Hachiyanagi wrote an apology, but he acknowledged it was not the right time to read it. He suggested the attack was due to his client struggling with anger. She was told at a young age that the feeling was shameful, he said.

“My client had an anger that she was not familiar with,” he said. “She was distraught, to say the least.”