Arizona Man Allegedly Drove Over ‘Friend,’ Then Stomped on His Head Multiple Times 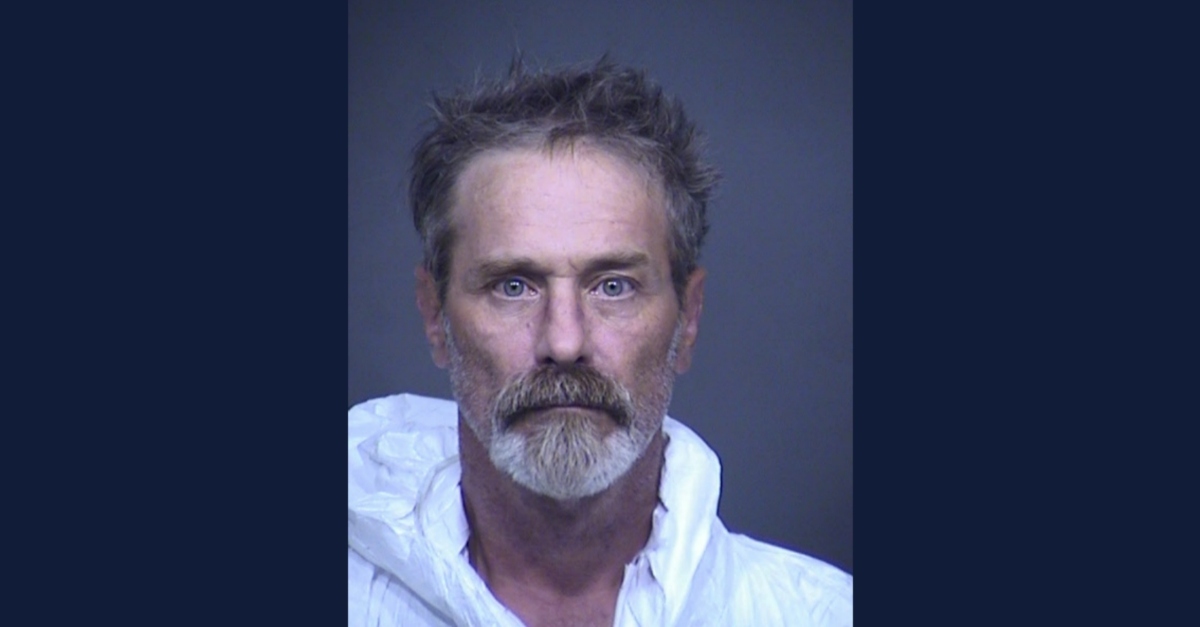 A driver ran over a man, then got out of the vehicle to stomp on the victim’s head, according to cops. Officers identified the suspect as John Lagana, 61, and the slain man as Christopher Heimer, 63.

“No one deserves to go out the way he did,” Heimer’s next-door neighbor Emmanuel Reynoso Avila told KNXV.

Friday, just after 12:30 p.m., officers responded to multiple reports of a driver running over another person on purpose, according to cops in the Phoenix-area city of Mesa, Arizona.

“A witness used their own firearm and shot a round into the ground, preventing 61-year-old John Lagana from leaving the area and allowing officers to take him into custody immediately when they arrived,” cops said.

Officers said they spoke with witnesses and looked at surveillance footage. They determined Heimer was walking westbound on the street while Laguna was driving eastbound.

“Lagana swerved out of the roadway and struck Heimer as he was walking on the north sidewalk, throwing him into the landscaping of a fourplex apartment complex,” cops said. “Lagana continued to travel eastbound on the sidewalk, damaging mailboxes and landscaping before turning around and driving back toward Heimer. Witnesses say Lagana again drove onto the sidewalk, into the landscaping and ran over Heimer, who was already lying injured on the ground. Lagana then got out of his vehicle and proceeded to stomp on Heimer’s head multiple times. This is when one witness used their firearm to put an end to Lagana’s actions.”

Witnesses said that Lagana had been parked in a vacant lot northwest of Heimer’s home, and he honked his horn repeatedly until the victim stepped outside, according to officers.

Lagana allegedly accelerated through the empty lot onto the street, leaving behind skid marks on the road and sidewalk.

“All of a sudden we hear honking and we hear a car speed up,” Avila told KNXV. “We look over and we see my neighbor Chris get full on rammed by someone who was supposedly his friend.”

Avila said Heimer was unresponsive after being hit. He described himself as rushing inside, grabbing his gun, and firing a warning shot while telling Lagana to get out of the car. He kept the gun aimed at Lagana until cops showed up, he said.

Locals are in mourning and remember Heimer fondly. Now 20, Avila said he knew the man since age 8.

“Chris was super friendly,” he said. “Really welcoming to everyone in the neighborhood.”

Lena Santonocito told KNXV she and Heimer were each other’s best friends.

Lagana allegedly told authorities he knew Heimer, who allowed him to park at the home because he was homeless, according to AZ Family. He told officers his discovered his ex-girlfriend lived at the residence, cops reportedly said. He allegedly claimed he was there at the time to help “another friend” and fell asleep. Lagana claimed to hear the girlfriend yelling at the home, cops said. Officers said he stopped talking and asked for an attorney.

Lagana was arrested for first-degree murder and locked up on a $2 million bond.