87-Year-Old Man Emailed His Children His Plans Before Killing Wife and Himself: Authorities 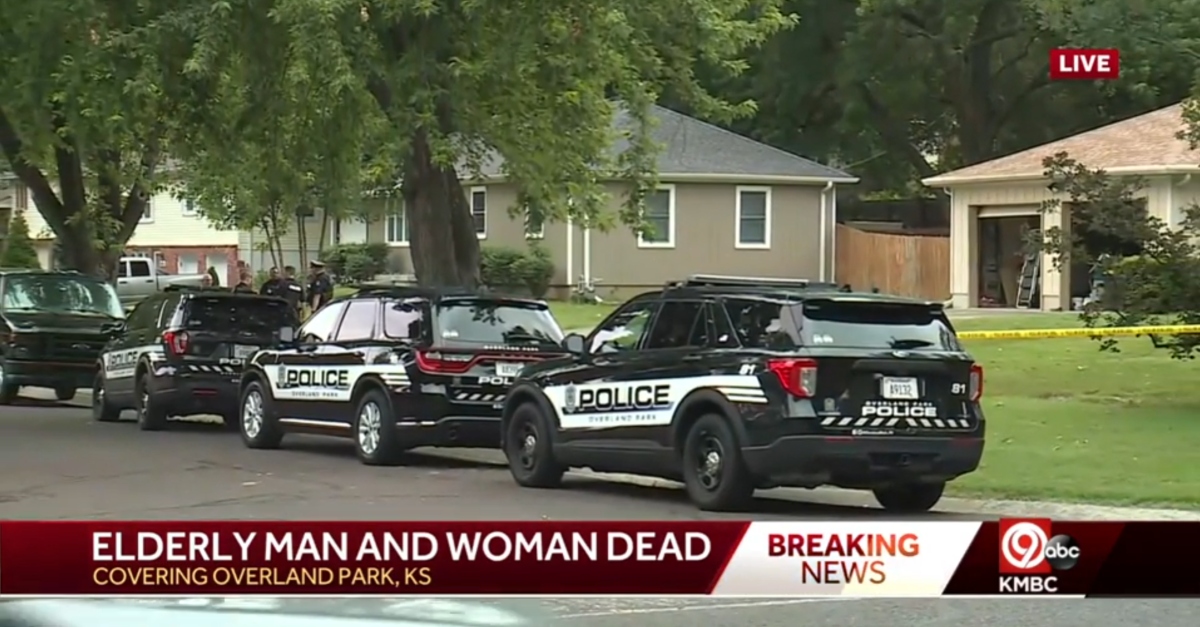 An elderly man in Kansas shot and killed his bedridden wife, then died by suicide, according to cops.

Neighbors reportedly said that Frank Mayfield, 87, and Donna Mayfield, 87, were a loving couple, and that incident was both a tragic shock and out of character for them. Frank Mayfield wrote his children an email explaining his plans before the incident, authorities said in a KMBC report. Officers did not detail this message.

Officers in the city of Overland Park near Kansas City, Kansas, said they got a 911 call Thursday morning telling them a resident in the 8400 block of England Street had been shot.

“The phone call was placed by the male homeowner inside the residence,” they said.

The caller, identified as Frank Mayfield, had said his wife had been shot; he hung up the phone immediately, cops said, according to KSHB.

Arriving officers found the garage door open, police said in the KMBC report. Donna was upstairs dead in a hospital bed, and Frank was 5 to 10 feet away. Frank died from an apparent self-inflected gunshot wound.

“I do know there was a firearm that was in the area where the male was recovered,” Overland Park police officer John Lacy told reporters.

There was a gun in Frank’s hand, officers said, according to KSHB.

Donna was bedridden and in hospice care, Lacy said.

Family members said Donna had been getting healthcare at home, but they denied that she was on hospice, according to KCTV. Relatives told the outlet the deaths shocked and saddened them.

A son-in-law of the couple suggested Frank Mayfield did not want to take care of the ailing Donna Mayfield anymore, according to KMBC.

Overland Park Police have identified the husband and wife who died in an apparent murder-suicide this morning as Frank and Donna Mayfield, both 87. Police belief Frank shot and killed his bedridden wife on hospice, then turned the gun on himself. Updates @kmbc pic.twitter.com/WRiH25FZQo

Shocked neighbors described the couple as kind but suffering from health issues recently, though these neighbors did not suspect any major mental health challenges, according to KCTV.

“There was no indication of any problem there at all,” he said. “A month ago, he was just fine. It’s really a shocker.”

“Never thought it would happen this close, especially when I was outside and never heard one gunshot,” he said.

He described seeing Donna outside in a wheelchair three weeks ago and wanting to have a conversation with her.

“Never got around to it,” the neighbor said. “This is kind of heartbreaking.”

Another neighbor lived near the Mayfields for 15 years, describing them as sweet, according to KMBC. They loved one another and used to have cute dogs, this person said.

Neighbor John Gronberg said the incident was “not in their character,” according to The Kansas City Star.

He described himself as a longtime neighbor, saying he and his wife were “devastated” when they learned about the deaths.

Both of the Mayfields had declining health. Frank looked into nursing home information, the neighbor added.

Another neighbor, who did not want to be identified, said the Mayfields were loving. They were, however, more withdrawn as Donna’s health declined in the last several years. Frank really loved his wife, this person said, citing the way Frank cared for Donna.