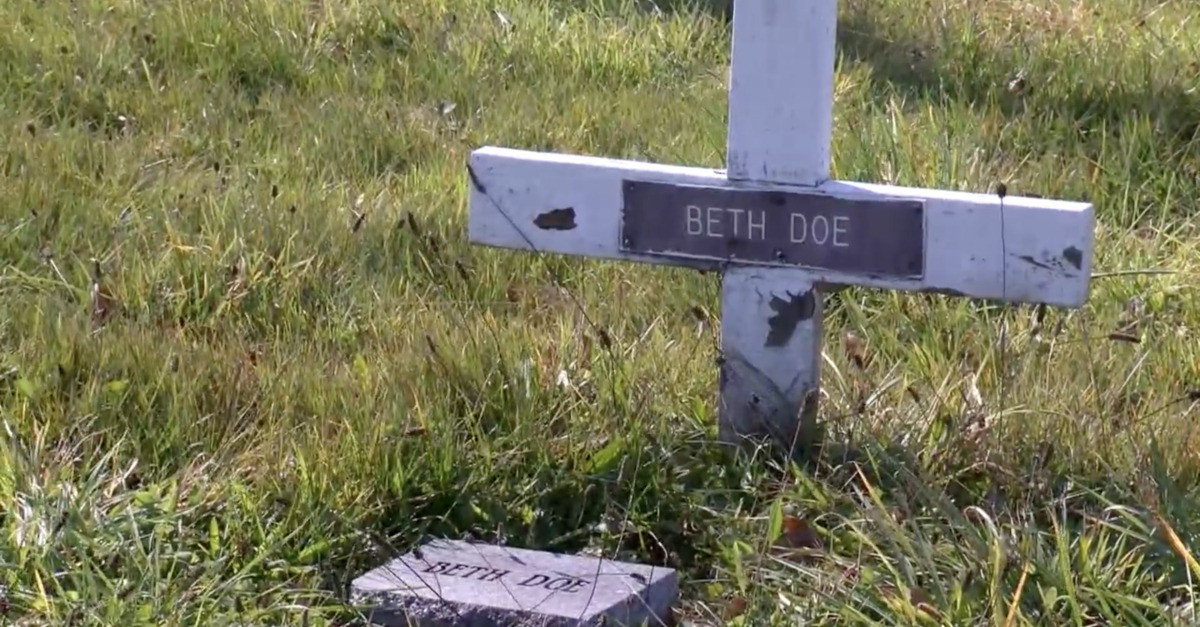 Evelyn Colon went missing in 1976 when she was a teenager and pregnant with a baby girl. Yesterday, after eluding detection for nearly 45 years, their alleged murderer was finally arrested.

Five days before Christmas in the year she went missing, Pennsylvania State Police were called to inspect the remains of a mother and child who were dismembered and spread between three separate suitcases underneath the Lehigh River in Carbon County.

Troopers found a grisly and disturbing scene. The 15-year-old girl’s ears and nose had been removed from her severed head, though police believe she was initially strangled to death before later being shot. The baby she carried was nearly full-term, on the cusp of life.

But years passed, and no one claimed the remains. There were no leads. She was buried as Beth Doe in a local cemetery.

“Well, a knock came at the door, and it was the cop. And he wanted to know if I had seen anything, and it’s ironic because my son and the young fella Kenny Jumper that found her, they were trapping and they would take turns checking their traps,” she told local NBC affiliate WBRE, expressing the common sentiment in the area that the cold case would remain unsolved forever.

“It’s a small town, but like I said, it’s just, everybody couldn’t believe,” she added. “They felt bad for the girl and for the baby. Who could do that to someone like that?”

Police say the culprit is 63-year-old Luis Sierra, Colon’s former boyfriend. He lives in Ozone Park, N.Y. and was arrested on Wednesday. He is currently awaiting extradition.

Since Colon was never reported missing, investigators didn’t know who they were looking for—or, for that matter, where to look for additional information. But after a series of failed DNA tests, one eventually yielded some progress. In 2020, the girl’s femur turned up a possible match for a living relative after being tested in a Texas lab.

He confirmed that his aunt had gone missing in the late 1970s. Then police turned to Evelyn’s brother, the younger Colon’s father, who positively identified his dead sister via her description. Migdalia Colon, Evelyn’s sister, gave investigators key details about Sierra.

She recalled that in mid-December of 1976 Evelyn told their mother she had not been feeling well and asked for her to bring soup. When the mother arrived at the Jersey City apartment shared by Luis and Evelyn, she found that it had been cleared out. Migdalia told police that Luis had been abusive and jealous, going as far as locking Evelyn in their apartment.

In January of 1977, the Colon family received a letter with no legible return address but stamped in Connecticut. The letter stated in Spanish that Evelyn and the baby were doing well. The letter described the baby as a boy, weighing 9 pounds and said that if Evelyn needed anything, she would be in touch. However, based on Evelyn’s lack of ability to write, she was not believed to have been the one that penned the letter.

Multiple interviews with Sierra resulted in a series of shifting stories, investigators claim. At first, Sierra denied he ever knew Colon, according to police. He later admitted to dating her and said he knew she was pregnant with his child but insisted he last saw her at their Jersey City apartment.

But Sierra allegedly couldn’t account for his lack of effort in trying to find his girlfriend and daughter after their disappearance. And he didn’t have any explanation for that rosy letter either, police say.

Sierra was charged with one count of criminal homicide by Carbon County authorities on Wednesday. District Attorney Michael Greek is currently tight-lipped but has promised to elaborate soon.