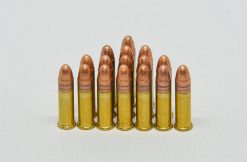 “This is our county. We speak English here,” he allegedly said during the November 22 incident, and later threatened to “shoot all Spanish-speaking people.” The employees called police, and investigators later turned him up. Cops say he admitted to the incident, and they found a .22-caliber on his person. Bad for him since he’s a convicted felon and is prohibited from owning firearms.

Rossi faces counts of misdemeanor criminal possession of a weapon, and second-degree harassment. According to jail records obtained by Law Newz.com, he’s out on $500 bail.