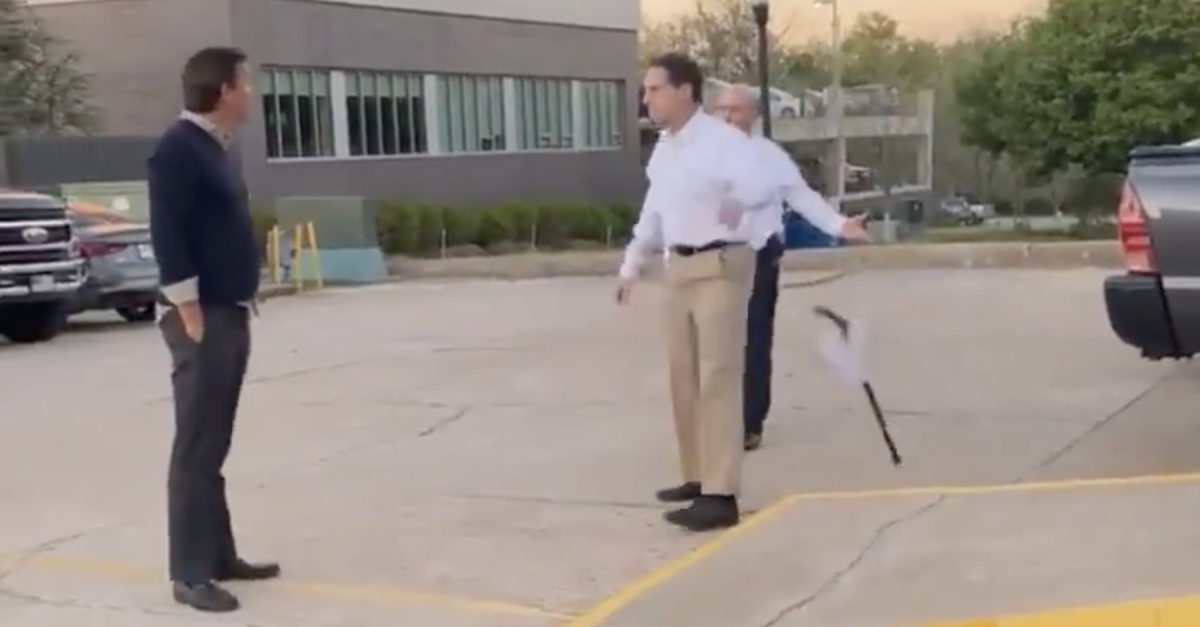 Karren, pictured on the right

A county judge in Arkansas got into a tense verbal altercation with the former speaker of the Arkansas House of Representatives over a parking spot late last week. The denouement was caught on video.

On Saturday, former Republican legislator Davy Carter, who previously represented the City of Cabot and parts of Lonoke County, Ark., posted about the Friday evening incident on Twitter.

The best part is him throwing down his cane and bowing up. pic.twitter.com/bW6ulAv44m

“Yesterday evening my wife and I had a wonderful early dinner (arrived 5:30) at The Hive in Bentonville,” Carter wrote. “We called our oldest son, a student at UA, to come see us to walk around the square. He arrived a little after 7:00 pm.”

Carter’s son chose a government-owned parking lot near a museum hotel that serves as government parking during regular business hours–specifically for court employees. Since he had arrived well after 5 p.m., however, he figured his choice of parking spot was fine.

The younger Carter apparently picked the wrong parking spot. And Benton County Circuit Judge Brad Karren made sure to let him know.

“I walked out and saw a very angry man with a gun on his hip and a cane berating my son and wife because my son parked in ‘his’ parking spot,” Carter’s tweets continued. “It was beyond berating, and, like any dad or husband, immediately caught my attention.

Carter’s son had seemingly not noticed a separate sign hanging right above and near the spot he had chosen which said that parking there which reads: “Reserved parking 24/7 violators towed,” according to the Northwest Arkansas Democrat Gazette.

“My son and wife repeatedly apologized to him and my son unsuccessfully tried to explain to him that he thought, per the signs, that after 5:00 pm anyone could park there,” the ex-lawmaker’s thread went on. “They were both met with rabid fury and anger.”

“I told him to not talk to my son that way and to not be a ____,” the onetime politician added–not sharing which pejorative or piece of profanity he used in the moment. “That he would move his truck.”

But the judge was allegedly uninterested in those repeat apologies and offers to ease the tension on the scene.

A video showing the final 27 seconds of the contretemps was provided to Carter by a third party in which Karren’s bailiff, Kevin Trevathan, tells Carter “there’s nothing to be gained here.”

“I understand,” Carter tells the officer. “He’s my son.”

“I don’t care,” the still-upset judge says. Seconds later, Karren throws his cane down onto the asphalt and squares up.

Carter says his son “did not know” the specific parking spot was reserved for the judge–prompting Karren to angrily throw his hands into the air shout: “What did he not know about?!”

The two take their leave as Trevathan steps between them.

“This is basically how he treated my wife and son in the minutes before,” Carter said in a follow-up tweet describing the video. “Rabid, insane behavior. Unfitting for a good citizen much less a sitting circuit judge. Mr. Karren, you owe my wife and son an apology. You should be embarrassed. You are unfit to be on the bench.”

Carter said the entire episode lasted roughly three to five minutes and went on to say the judge was “lucky I was in a good mood.”

The extent of that luck is now an open question–for other lawyers.

Little Rock-based ABC affiliate KATV reported on Monday morning that the Arkansas Judicial Discipline and Disability Commission had initiated an investigation into Karren over the incident.

Carter served as a state representative from 2009-2015. Karren was first elected circuit judge in 2012.