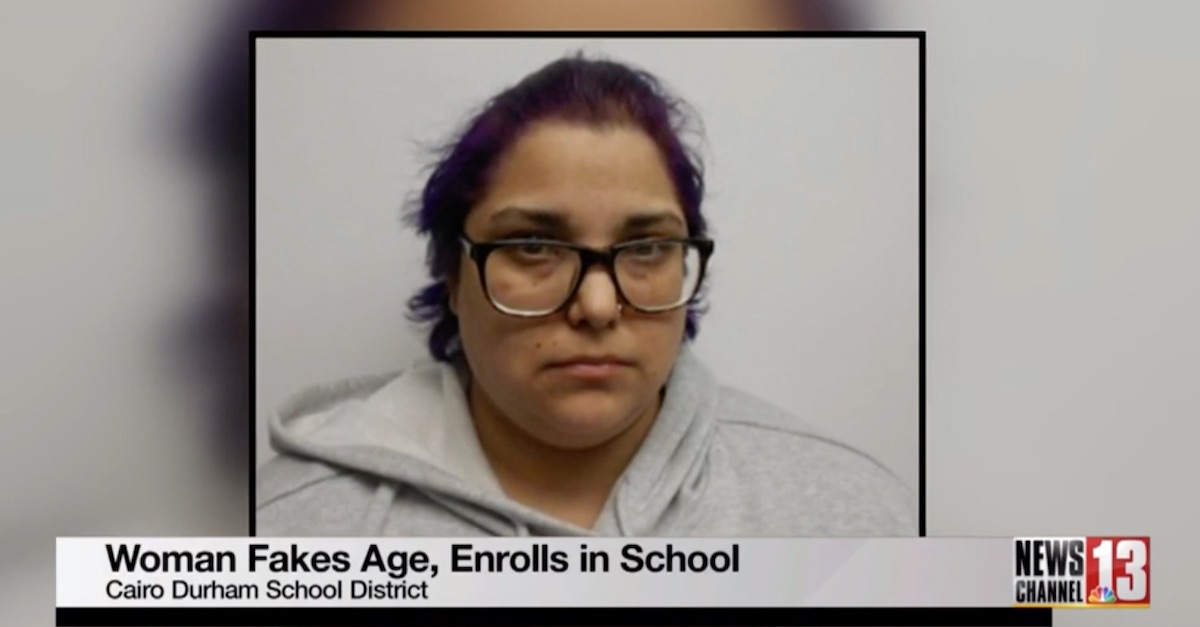 As Bowling for Soup once sang, “high school never ends.” That was apparently the case for a 32-year-old woman who, despite having already obtained a diploma, allegedly posed as a 15-year-old homeless student and attempted to re-enroll in classes at an upstate New York school.

The woman, identified as Michaelann Goodrich, allegedly posed as Riley Madison and did, indeed, attend school for a day. It happened at Cairo-Durham High School.

Goodrich was hauled into police custody on Dec. 28, more than a week after she allegedly rode the bus to school and went to classes. Goodrich attempted to enroll in classes and attended some on Dec. 20, school officials said.

According to WNYT, administrators thought something was off and contacted police, but also said the McKinney–Vento Homeless Assistance Act of 1987 compelled them to admit Goodrich to the school immediately because Goodrich said she was homeless.

District Superintendent Anthony Taibi confirmed that Goodrich went to school on Dec. 20, was absent on Dec. 21, and then could not come back because school was closed for the holidays. As this was looked into more closely, the Greene County Sheriff’s Department said they found that Goodrich had already earned a high school diploma and that she was not who she claimed to be.

Needless to say, concerned parents found this incident “unnerving,” saying that it’s the kind of thing that makes it easier to see how mass shootings at schools occur.

“It was kind of unnerving, it could’ve been anybody you know you hear about school shootings all that, could’ve been anybody coming in here trying to get plans of the school. I mean obviously that wasn’t the case but it could’ve been,” Joshua Mack said. “[M]aybe they need to look into the [McKinney–Vento Act] a little better maybe find out–not throw her in school right away, find out where she came from, find out what’s going on with the family and everything.”

Goodrich faces charges of felony false instrument for filing, felony falsifying business records, and misdemeanor criminal trespassing. A motive behind all of this has not yet been made clear.