Violent Trump supporter at a rally in Texas assaults a peaceful counter-protester pic.twitter.com/s950Q3kgTj

A man has been arrested for an assault caught on tape. Police in Denton, Texas say that Jason Lata, 44, is the individual seen on video sucker punching another. Cops did not say why the altercation started, only that the victim told them an argument occurred after he saw supporters of President Donald Trump.

Footage of the incident was widely shared on Twitter.

Video shows the attacker in a beige and red cap, and a black shirt.

“I’ll fucking eat your fucking face off, motherfucker,” he says, while face to face with another man, who was wearing sunglasses and a mask, and holding what seemed to be a flag. They jaw at each other for a bit.

“You want a fucking piece?” the attacker said. “Turn it off!”

A third man–wearing a gray cap and wearing a “Trump 2020” shirt–stands to the right of the attacker, and also faces the masked person. He is more chill than the attacker, even appearing to smile.

“You guys shouldn’t even be here, bud,” the third man told the masked man.

“I’ll fuck you off,” the attacker said, and punched the masked man in the face, knocking him to the ground. “Get up, motherfucker.”

At the end of the video, the YG and Nipsey Hussle song “Fuck Donald Trump” can be heard in the background.

The incident caught the attention of Denton Police, with Chief Frank Dixon announcing an investigation. Police said the incident happened at at location for Buc-ee’s, a gas and travel center, on Saturday at approximately 12:40 p.m. Officer said they had been dispatched to a hospital regarding an assault. Authorities said that they saw an abrasion under the victim’s right eyebrow, and they also noted a broken tooth.

“The victim told officers that he and a friend observed supporters of President Donald Trump at the location,” officers said. “A verbal argument ensued, and the victim said an unknown male then punched him in the face.”

Cops had not yet identified a suspect.

“Because this was one of many meet-up locations in the DFW area, it is unknown at this time if the suspect is from Denton or surrounding area,” Dixon said.

Police said the man was “last seen in a dark-colored Dodge Ram.” 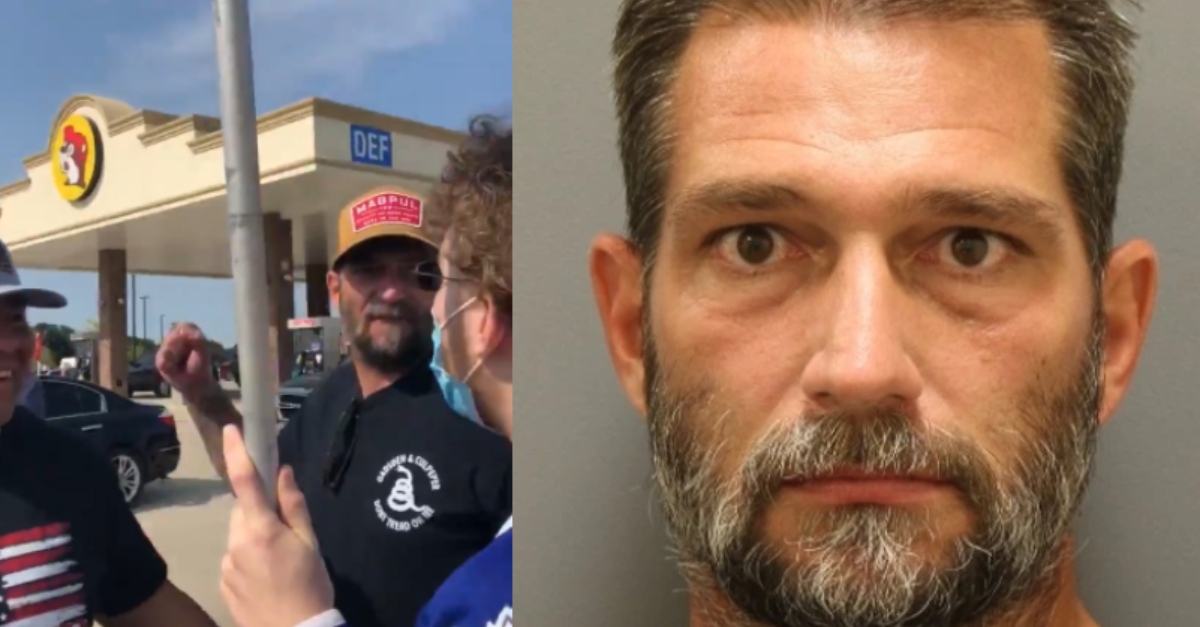 The attack caught the attention of Denton police. They have arrested Jason Lata (right) in the incident.

Police ended up arresting Lata in the incident. Dixon said the defendant was not at the scene when police got there on the initial call, and was not a Denton resident.

The defendant faces a count of assault causing bodily injury. He was locked up at the City of Denton Jail on a $15,000 bail. It is unclear if he has an attorney in this matter.

[Screengrab on left via @davenewworld_2; mugshot on right via Denton Police Department]