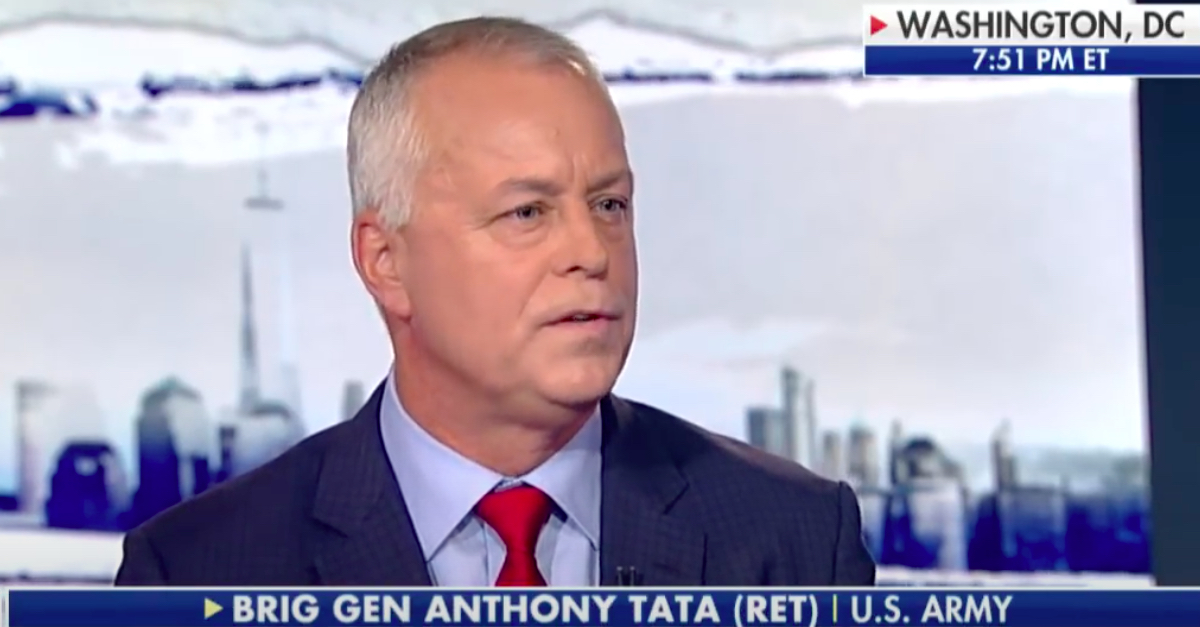 One of the Trump administration’s most controversial figures will be assuming a high-ranking role at the Pentagon after acting undersecretary of defense for policy James Anderson resigned on Tuesday, continuing a post-election purge at the Department of Defense that’s already included the ouster of Defense Secretary Mark Esper.

Acting Defense Secretary Christopher Miller announced Tuesday that Anthony Tata, the Senior Advisor to the Secretary of Defense, would be taking over as the department’s top policy official.

A retired Army brigadier general who went on to become a novelist and Trump-defending commentator on Fox News, Tata also earned himself a reputation as a notorious conspiracy theorist. But that didn’t stop President Donald Trump from appointing Tata as the undersecretary of defense for policy in June. Soon thereafter, however, confirmation hearings were cancelled and Tata’s nomination was pulled after CNN’s K-File team revealed a series of Islamophobic tweets posted by Tata, including several involving former President Barack Obama. He was later given a role at the Defense Department that did not require Senate confirmation.

Per the K-File report, Tata said Islam was the “most oppressive violent religion I know of” and called Obama a “terrorist leader” who did more to harm the United States “and help Islamic countries than any president in history.”

The retired brigadier general also categorized Obama’s foreign policy as being “born of the Jeremiah Wright school of hate America” and accused the nation’s first Black president of harboring a “Weather Underground” philosophy, referring to the anti-war domestic terrorist group that bombed government buildings in the 1970s.

“I think that John Brennan is a clear and present danger and a threat to this nation. He supports the overthrow of this particular president and he needed to have his access to information revoked,” Tata said during a 2018 interview with Fox News.

Twitter also once removed one of Tata’s tweets saying that former CIA Director Brennan should commit suicide. In a May 2018 tweet directed at Brennan, Tata wrote: “Might be a good time to pick your poison: firing squad, public hanging, life sentence as prison b*tch, or just suck on your pistol. Your call.” He also included hashtags for “treason,” “sedition,” “Crossfire Hurricane,” and “Obamagate.”

Ladies and gentlemen, meet Anthony Tata, who, as of this morning, is the "Senior Official Performing the Duties of the Underscretary of Defense for Policy" — the top policy job at the Pentagon. https://t.co/m3BKkkhr06

While taking on the Pentagon’s third-highest ranking role, Tata may perform all of the duties except for those that qualify as “statutory duties” under the Federal Vacancies Reform Act, which “must be referred to the Secretary of Defense with a recommended course of action,” per Miller’s memo. However, Tata cannot use an “acting” title and will instead be referred to as “Performing the Duties of the Under Secretary of Defense for Policy.”