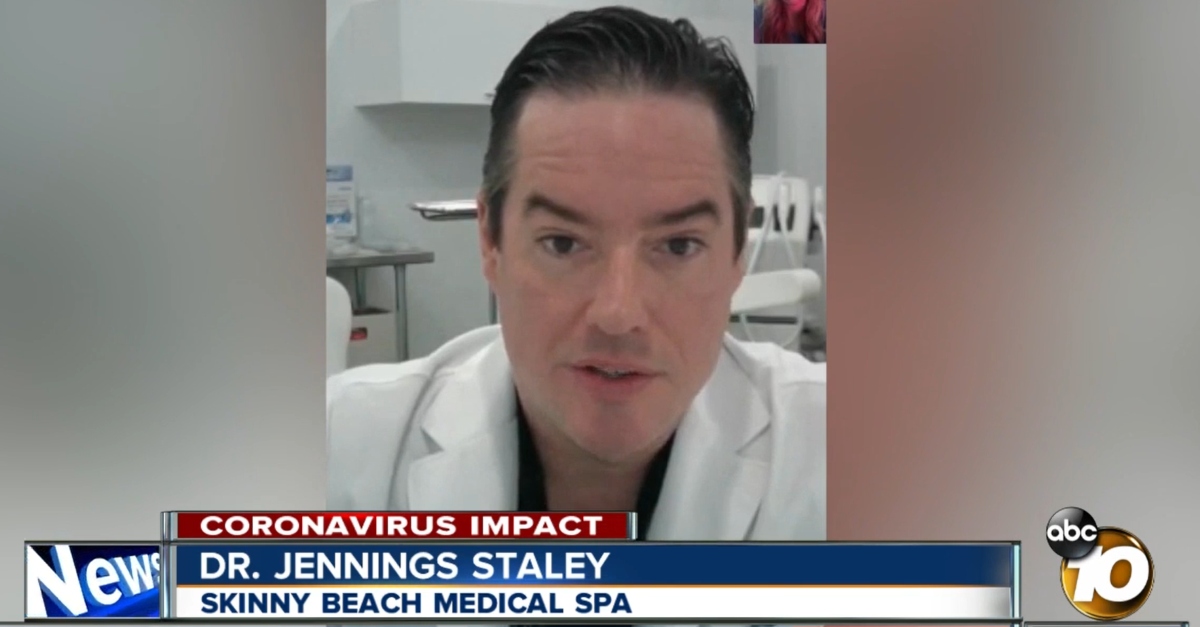 A California physician is accused of selling a fake cure for COVID-19. Dr. Jennings Ryan Staley is charged with mail fraud according to records viewed by Law&Crime. Staley runs the Skinny Beach Med Spa in San Diego, Calif.

“My wife was in tears all day Saturday fielding phone calls from people who say I’m an unethical doctor,” he told the TV station at the time.

Authorities say Staley’s actions step over the legal line. Staley allegedly told an undercover FBI agent that he was providing a “miracle cure” that would stop COVID-19 “100%,” and he promised immunity from the virus for at least six weeks. His terms included “magic bullet,” the Department of Justice said in a press release.

“It’s preventative and curative,” Staley allegedly said. “It’s hard to believe, it’s almost too good to be true. But it’s a remarkable clinical phenomenon.” According to prosecutors, he said he’d never see anything like this in medicine where the disease “literally disappears in hours.”

Perhaps the key phrase was “almost too good to be true.” Agents with the Federal Bureau of Investigation said they interviewed Staley a week later.  Then, they say Staley denied telling patients his COVID-19 treatments cured the disease 100 percent.

“No, that would be foolish,” he said. “We would never say anything like that.”

The defendant is also accused of also offering the undercover agent the controlled substance Xanax and shipped it without doing any medical exam. According to the official account, Staley said that his broker was smuggling hydroxychloroquine from China by passing if off as sweet potato extract.

An arraignment was originally set for Friday, but it was rescheduled for June 11. A preliminary hearing is planned for May 28. Records do not show an attorney at this time for the defendant. Staley could not be reached for comment.