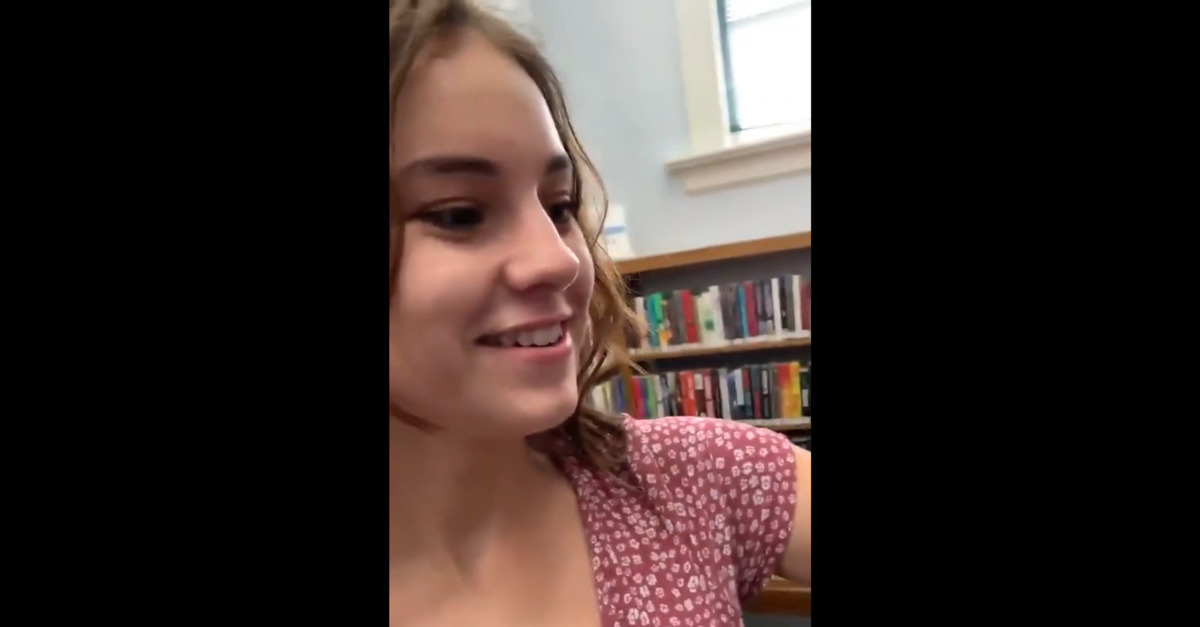 “Nothing is pleasanter than exploring a library,” wrote the English poet Walter Savage Landor–but he never met the astute filmmakers and marketers of Southern California.

A low-budget adult film shot in a public library during business hours is raising some questions in the Golden State.

The full video, which runs for more than 10 minutes, is increasingly hard to come by online–but a few shortened versions of the video are still extant in several Reddit communities.

According to Los Angeles CBS affiliate KCBS, some are outraged by the choice of venue–the Santa Monica Public Library’s Ocean Park Branch–disgusted by when and where the producers chose to shoot.

In the film, fairly typical of the genre, Eilish giddily bounces around discussing the prospect of being caught while also paying homage to the intellectual fruits and public services available in the building where she and her partner perform for the camera.

“It’s silent, and like, judgment-free, just knowledge,” Eilish says, a few moments after removing her underwear on a Santa Monica city street and right before entering the storied place that famous Argentine writer Jorge Luis Borges once described as a “Paradise.”

At another point, Eilish remarks upon “how quiet it is,” seemingly respectful and content to be in such a place of peace. Later, while fully ensconced among the literary heavyweights of the tiny beach-adjacent library’s fiction section, Eilish surveys what the shelves around them have to offer.

“Fitzgerald!” she exclaims before laughing happily at the find and thumbing through the ranks of other books on display nearby.

The whole affair sparked some outrage among locals once it was discovered.

“They say that it is a misdemeanor and unless they witness it themselves, there is nothing they can do about it,” McLaughlin groused.

Public indecency laws in California are all misdemeanor offenses slated under the rubric of disorderly conduct–unless an individual is repeatedly convicted of violating the same or a similar statute. Prosecutors in such a pornography-friendly environment are unlikely to single out Eilish and her film co-star for punishment in this case.

“We have to have laws to stop them from doing things that puts children in harm’s way,” McLaughlin added.

The outraged neighbors also appear to have some outstanding complaints about the city’s public library system.

It should be noted that the Santa Monica Public Library system has maintained a five-star rating for some time.

Other complaints about the short adult film have to do with the somewhat misleading title (“Tiny Teen Sis Ellie Eilish Caught Banging in Crowded Public Library”).

“It’s a great video but they don’t get caught in it,” one Reddit commenter noted.