Police in Martinez, California are looking for a woman and a man who defaced a Black Lives Matter mural on Saturday, the Fourth of July. The incident was all caught on video. In the police account, locals got a permit to paint the original display on Court Street in downtown. But the suspects arrived when that was finished; they had cans of paint and a roller.

MPD was notified and by the time we arrived the suspects were gone. A witness provided a photograph of the suspect’s vehicle which was described as a Nissan pickup truck with the word “NICOLE” on the right side of the tailgate in silver lettering. The truck has a camper shell and the license plate is 52701B1.

They say this is the suspect’s vehicle: 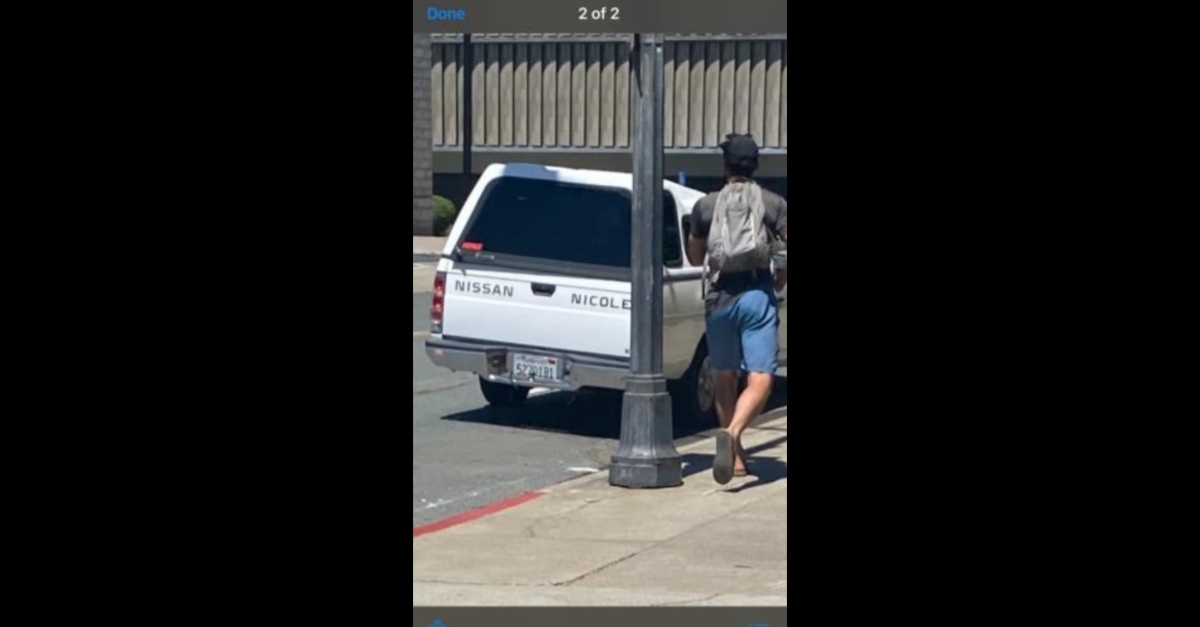 Officials ask that anyone who can identify the duo in the incident to call the police dispatch center at 925-372-3440.

As seen on video, a woman in a red shirt and black skirt takes a paint roller with black paint over the yellow lettering of the mural. The other suspect–a man in black shorts, a MAGA hat, and a red shirt stating “Four More Years”–stands nearby, arguing with angry bystanders, and apparently recording the incident on his cell phone.

He continued to lecture the bystanders. He said to “Keep America Great Again, that’s right. Why don’t you guys learn about history, and the Emancipation Proclamation Act?”

The man did most of the talking, but the woman made a couple of brief outbursts.

“Keep this shit in fucking New York,” she said. “This is not happening in my town.”

She said at another point that the mural “wasn’t good.”

“You know what’s not good?” said a bystander. “Kids are in fucking cages right now.”

“Shut the fuck up,” said the female suspect. “That’s not happening, okay.”

The vandalism was “hateful and senseless,” police said. “The City of Martinez values tolerance and the damage to the mural was divisive and hurtful. Please help us identify those that are responsible for this crime, so they can be held accountable for their actions.”