Lawyer Shows Up to Court with 'Bedbugs' | Law & Crime

Lawyer Showed Up to Court with ‘Bedbugs’ Crawling All Over Him ‘in Abundance,’ Seemingly Had No Idea 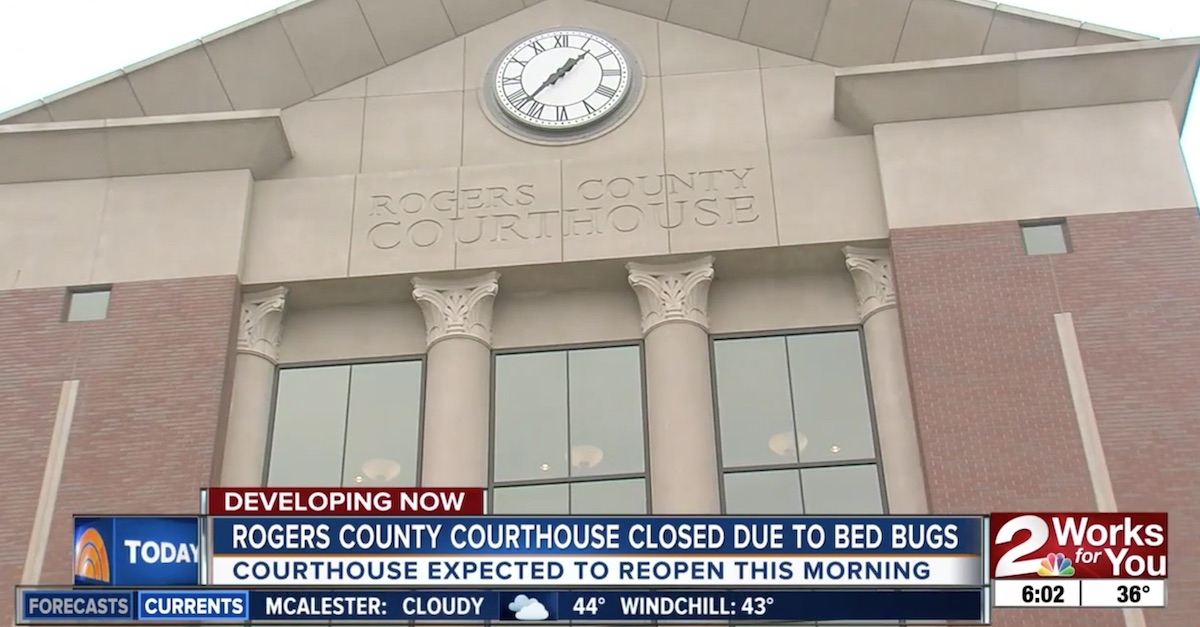 It’s hard to imagine a scenario where one would show up to work with bedbugs crawling all over them and not having a clue, but that’s apparently what happened at the Rogers County Courthouse in Oklahoma.

An unidentified lawyer caused the wheels of justice to grind to a halt on Monday, having appeared at court with what was described on the front door as a “confirmed case of bedbugs.”

As a precautionary measure the Rogers County Courthouse will close on 2/4/19 @ 12:00 to allow us to insure public safety.

As you can see, a “precautionary” shutdown occurred around noon on Monday. Tulsa World reported that a person saw that the lawyer in question “laid his coat over some files.” That person observed bugs “crawling” on him. Apparently, when the lawyer moved his coat “bedbugs fell out of it.”

The courthouse reopened as hoped on Tuesday morning, but not before they “called in some professionals” to spray down the place, according to Sheriff Scott Walton.

Walton himself said that it was “[h]ard to imagine someone doesn’t know, you know that some bed bugs are crawling all over them certainly in abundance.” Walton would add that the lawyer actually “shook his jacket over the prosecutors files.”

According to WXYZ, the head of security at the courthouse described his perception of the attorney’s reaction to the situation this way: “I don’t even think he cared.”

Sgt. Mike Clarke said that “One judge had 146 cases on her docket for this morning, and it all had to be passed because of this.” Meanwhile, Clarke said, authorities were also concerned because inmates were in the building.

Exterminators took care of the problem, but it was around a $5,000 problem (or more), and it’s not immediately clear if the unidentified lawyer or Rogers County taxpayers will have to foot the bill.