Investigation Suggests James Brown May Have Been Murdered | Law & Crime

Rape, Drugs and a Cover-Up? How a ‘Vision’ About Killing James Brown Led to Murder Investigation 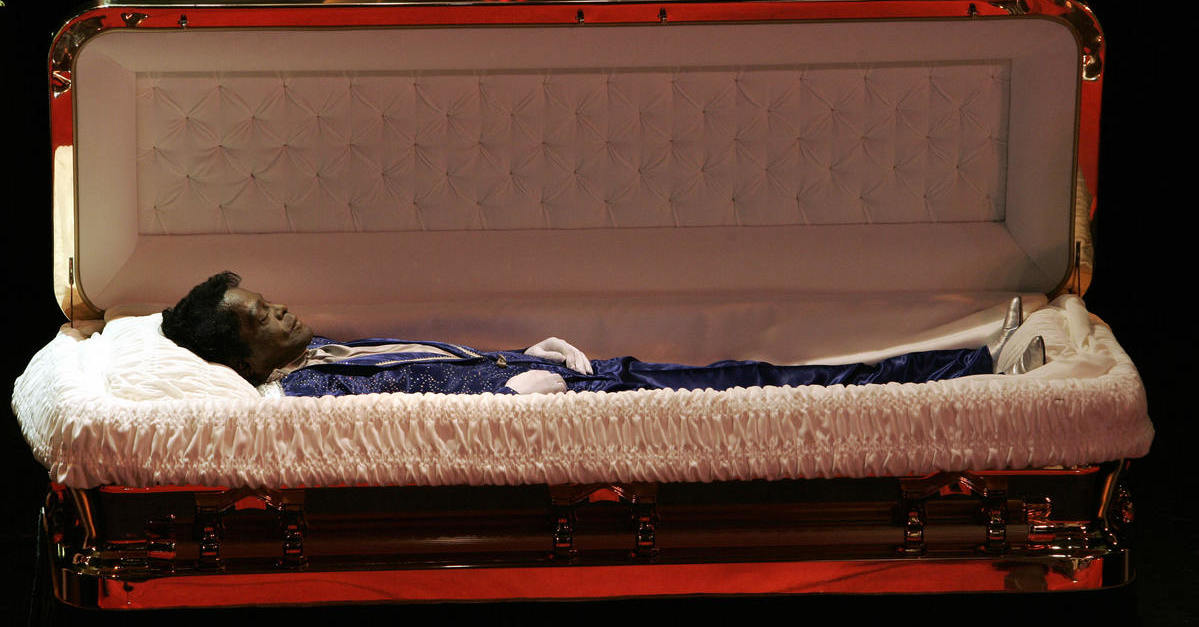 A new investigation suggests that legendary American icon and “Godfather of Soul” James Brown may have been murdered. At least that’s what more than a dozen people close to said investigation claim.

According to CNN, at least 13 individuals who knew Brown are demanding the late singer’s body be exhumed for an autopsy. Close to 140 people were interviewed for the three-part series.

One of those people was Dr. Marvin Crawford, a cardiopulmonary specialist who treated Brown at an Atlanta hospital just before he died–and who eventually signed Brown’s death certificate. The official cause of death? A heart attack brought on by fluid in his lungs–pneumonia.

“He was a patient I would never have predicted would have coded,” said Crawford, using a form of medical slang that describes a patient in cardiopulmonary arrest. “But he died that night, and I did raise that question: What went wrong in that room?”

Brown had previously–and briefly–worked with Hollander as a songwriting team during the 1980s before allegedly raping her at shotgun-point in the back of his van in the woods of South Carolina while he was purportedly high on his reputed drug of choice, phencyclidine–commonly known as PCP or angel dust.

“Something happened to me that night,” Hollander told CNN. “And the girl that went into those woods never came back out.”

A few days later, Brown led police on a multi-state chase. He was caught and sentenced to time in prison for carrying an unlicensed pistol, assaulting a cop and other drug-and-driving related offenses. That story made headlines. Brown always disputed the rape allegations and later won a civil lawsuit against him–prompting a change in sexual assault laws in Illinois.

Hollander later met Candice Hurst, a back-up singer who also occasionally worked as Brown’s hairdresser. They were introduced by one of Brown’s lawyers, Buddy Dallas, a man Brown reportedly wanted to fire–just weeks before his death.

Ten years after Brown’s death, Dallas allegedly told Hollander that she and Hurst would make good friends. Hollander was a bit down out at this point and agreed. The two met at a Red Roof Inn in Augusta, Georgia. Hurst allegedly told her that she and Brown were lovers and that she slept in his house the week before his death. She also allegedly revealed a “vision” she had had about the late icon.

In the vision, according to Jacque, Hurst was standing with [Brown’s manager] Charles Bobbit in Brown’s hospital room. She was giving Brown some drugs, and the drugs were spilling on the floor and on her shoes, and Brown wasn’t dying quickly enough. And so Bobbit poured some herbs into a glass of water. He gave Brown the water. Brown drank the water, and then he died.

Hollander interpreted that alleged vision as a confession of sorts. Hurst ays she never relayed any such vision and told CNN she did not kill Brown.

The story doesn’t nearly stop there.

“She said she was there,” Wilson told CNN. “She was at the hospital.”

According to Wilson, Hurst said that she had done drugs–“partied”–with Brown before his death, and admitted “maybe that killed him.”

Later in 2016, Hurst texted Buddy Dallas a frantic and lengthy text message about some of her belongings in a store unit. She said there was “James Brown stuff in it (big time).”

The rest of that text message was even more suspicious to Dallas. It read:

[L]ast month they let me pay $100 with a signed piece of paper saying i will pay the balance of $611 today by 9-if not they are auctioning the stuff off this morning – it will not be good if they do this Buddy with the first thing is a James Brown duffle bag with a lot of stuff including the dope he was doing the last week of his life in there!!! … it will look really bad!!!! For the lawsuit please help me Buddy? … you can keep the bag of JB stuff till i pay it back please Buddy- im at wits end! You know im trying really hard please! Everything will look so wrong we are trying to do PLEASE.

Dallas forwarded the message along to Hollander.

Hollander and Dallas decided she would go rescue those Brown-related items because they might contain Hurst’s “dirty secrets.”

But when Hollander later tried to give Dallas the duffel bag she had purchased for him, Dallas refused to accept it–and he also refused to comment on CNN’s investigation. What in the world was inside that bag?

“[T]here was a pair of black stiletto-heel shoes with something crushed on the soles — a leafy substance, mixed with white powder,” the report continues. “This reminded Jacque of something Hurst had told her when describing her ‘vision’ — the drugs had spilled on the shoes. Jacque thought she had evidence of a murder…”

Eventually Hollander went to the Atlanta Police Department–on numerous occasions. She was eventually told that there had already been an investigation and autopsy was performed on Brown’s body. That wasn’t true. There had never been an autopsy performed–at the family’s request. The family has never commented on why.