FWPD Confirm That #SwingSetSusan Is Not a Cop | Law & Crime

Fort Worth Police Respond After #SwingSetSusan Harasses Hispanic Teens at Park, Pretends to Be a Cop 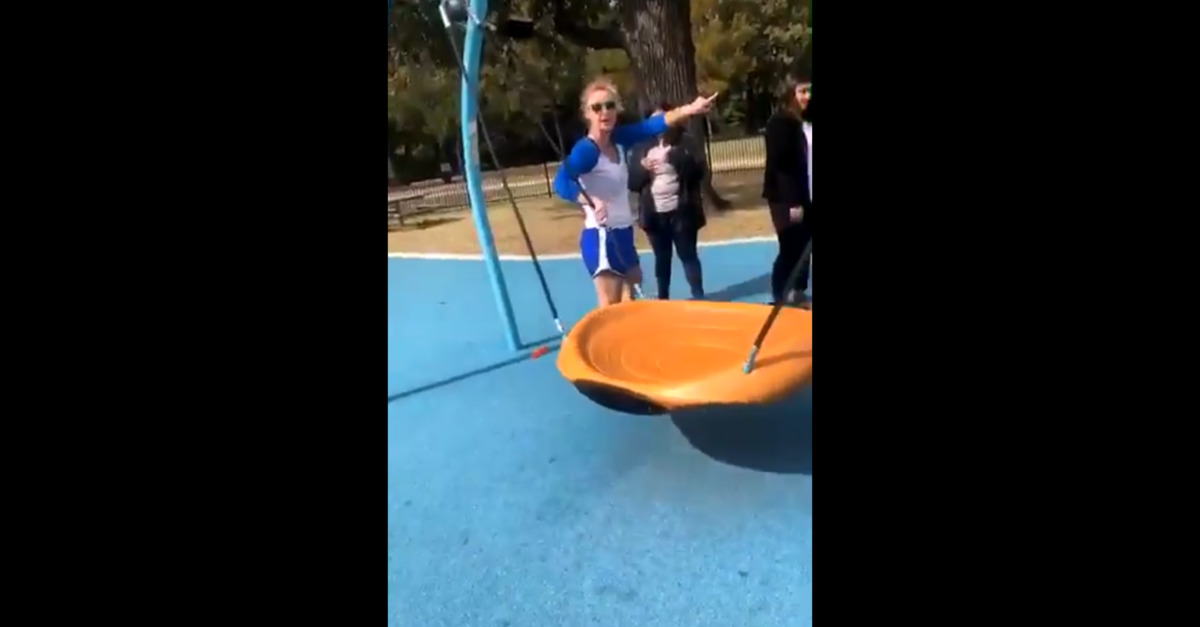 A white woman in Fort Worth, Texas has been baptized on social media with the moniker of “#SwingSetSusan” after accosting a group of Hispanic teenagers and telling them to leave an all ages park because they were, in her opinion, too old to be there.

In a viral video posted early Wednesday evening, the children can be seen playing on an orange swing set, generally having fun and minding their own business until the woman arrives–announcing her presence by angrily shouting at the kids.

“Stop! Stop!” she says–hushing the into group into a puzzled quiet. “It’s a children’s park, stop. Stop now.”

The woman then uses her hands to forcefully stop the still-moving swing. This occurs outside the frame of the video and it is presently unclear if one of the children was still swinging at the point the woman makes contact with the playground equipment.

“We are children?” a voice says confused off-camera.

“No, you’re not. And if you think you’re a fucking child, are you over the age [allowed to be in the park]?”

The children, in unison, say that they are, in fact, not over the age allowed in the park and begin protesting the woman’s presence.

“Okay, well,” the woman says while waving her hands, “I’m a fucking PD, so get the fuck out of here now if you’re not here to play as a child. Read the fucking sign.”

One of the children then attempts to argue with the woman–telling her that she’s only 16–and prompting the woman to say:

Right. Then you’re not a fucking child. Thirteen or younger. Actually not, because you provoked yourself as a child and you’re not even acting like a child. Are you? You said you’re 16. If you’re not, I can literally arrest you as an adult. Which is your choice? Are you a child or are you a god damned adult?

Twitter users claimed the woman was also harassing other people at the Fort Worth Dream Park on the day in question:

This woman was harassing others in the same park in another video. Here’s a clear picture that was sent to the PD, hopefully they can track her down pic.twitter.com/DBTWNqGICW

Fort Worth Police responded to the allegedly racist incident on Twitter:

We have received numerous mentions & messages regarding a woman in a park claiming to be “PD” & using vulgar & inappropriate language toward youth & children. She does NOT appear to be a #FortWorth police officer.

We thank everyone who brought this to our attention.

A later update confirmed that the woman in question is not an officer.

“In regards to the video that was captured on Oct. 16 at 3:41 p.m. at the Dream Park located at 2001 University Dr. in Fort Worth: It has been confirmed this person is NOT a FWPD officer, but a possible local resident,” the department said via Twitter. “We are actively investigating this incident.”

According to the Fort Worth Star-Telegram, a police report filed on the incident says the woman may have been intoxicated.

Law&Crime reached out to the FWPD for additional comment on this story but no response was forthcoming at the time of publication.