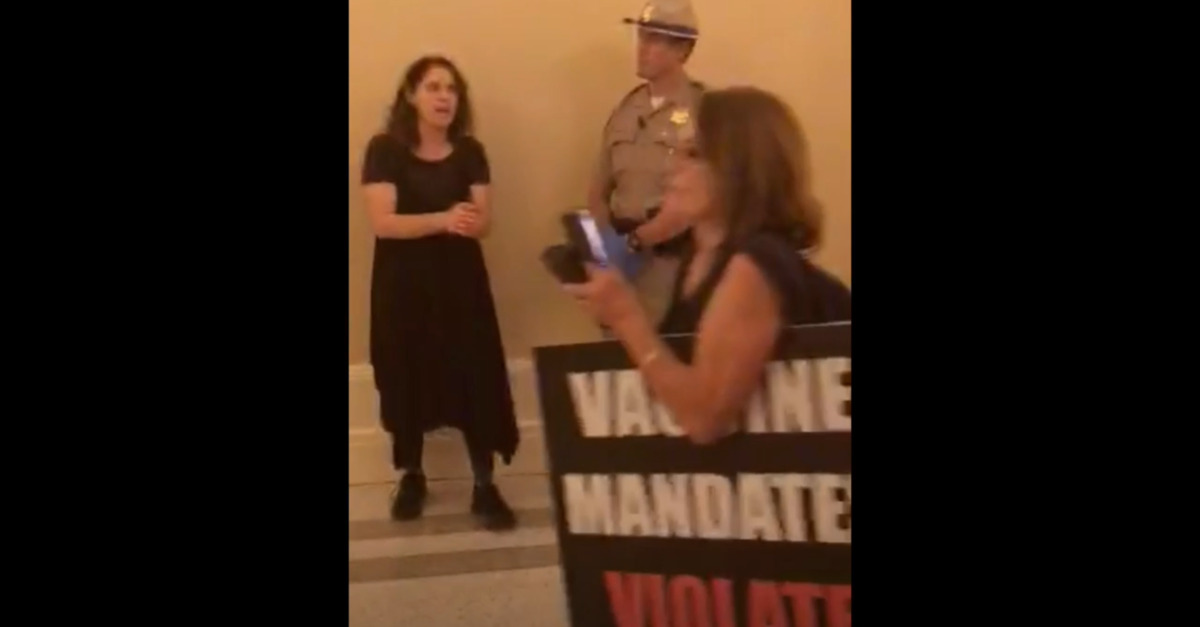 A female anti-vaccination activist allegedly doused several California lawmakers with what appeared to be menstrual blood during an open session on Friday.

The incident occurred early Friday evening on the last day of the legislative year. Anti-vaccination protesters were upstairs watching the proceedings when Dalelio allegedly threw down what the California Highway Patrol described as “a feminine hygiene device containing what appeared to be blood” as she yelled, “That’s for the dead babies.”

According to the Bee, Dalelio’s Facebook page “contains several anti-vaccine posts” and screenshots provided to the outlet reportedly show the woman has long opposed an effort in the California State Senate to increase oversight of vaccinations in the Golden State.

“Everyone is pretty disturbed and upset,” said California State Senator Richard Pan, the author of the legislation. “It’s like we’ve been saying, violent rhetoric turns to violent acts. This is a direct attack on the democratic process and this should be condemned by everyone. This needs to stop.”

California State Senator Dave Orinda said that he and five other lawmakers were hit by the red liquid. Immediately after the attack, the legislative session went into a lengthy recess and the chamber was evacuated.

Several of the senators then went home to shower, according to the Los Angeles Times.

“A few minutes ago, the anti-vaxxer stalkers – who’ve engaged in a harassment campaign all week – dropped a red substance onto the Senate floor from the elevated public gallery, dousing several of my colleagues,” said California State Senator Scott Wiener via Twitter. “These anti-vaxxers are engaging in criminal behavior. They’ve now repeatedly assaulted senators and are engaging in harassing and intimidating behavior every single day, as we try to do the people’s work. They’re a cancer on the body politic and are attacking democracy.”

Authorities investigated the substance after the attack and reportedly came to the conclusion that it was, indeed, blood. The California State Senate reconvened several hours later in a different room–marking the first time that lawmakers in Sacramento have been displaced since a big-rig truck crashed into the California state Capitol over 18 years ago.

“The Senate was disrupted earlier today by a violent protester,” said California State Senator Shannon Grove via Twitter. “Voicing opinions are important parts of the democratic process, but violence will not be condoned or tolerated. The Senate will not be prevented from conducting business and we are back in session.”

Jonathan Lockwood is the executive director of Conscience Coalition, the group that organized the anti-vaccination rally on the upstairs public gallery. In comments to the Bee, he criticized his fellow activist.

“We strongly denounce this,” Lockwood said, it goes far beyond crossing a line.”

The California Highway Patrol issued a conciliatory statement late Friday saying they had attempted to ensure the anti-vaccination protesters could “exercise their First Amendment rights while not interfering with the daily operations of the State Capitol or the safety of the occupants on state property.”

For what it’s worth, the protest and resulting menstrual blood attack were sufficiently in vain. California’s Democratic Governor Gavin Newsom tightened up the sunshine-heavy state’s vaccination laws by signing the two bills in question on Monday–several days before the incident occurred.