Following a Series of Tweets, It Appears as Though John McAfee May Be in U.S. Custody (UPDATE) 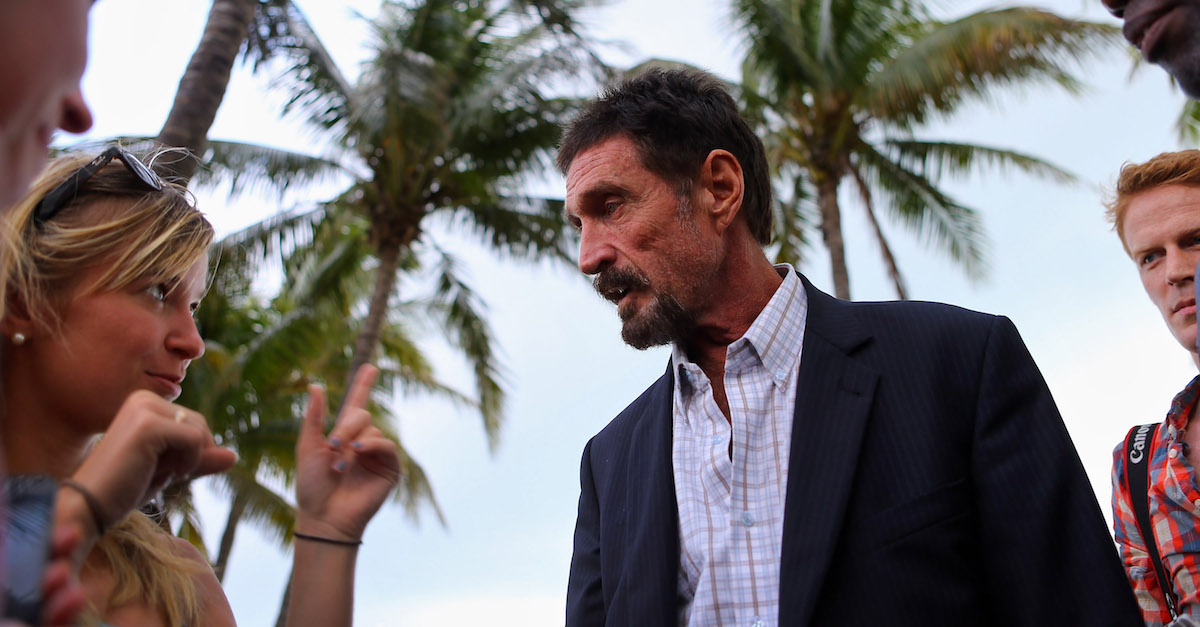 If his Twitter is to be believed, it would seem as though tech millionaire and cryptocurrency diehard, John McAfee, has been taken into U.S. custody. This happens days after he claimed the CIA attempted to “collect” him.

McAfee’s recent troubles with the U.S. government all began in January when McAfee announced that he had been charged with using cryptocurrency in criminal acts. In a bizarre video, McAfee claimed that the IRS had convinced a grand jury in order to indict him on unspecified offenses related to his refusal to pay income tax over the past eight years.

The McAfee 2020 Campaign is, as of this day, in exile. I am being charged with using Crypto Cuttencies in criminal acts against the U. S. Government. More videos coming shortly. Stay tuned. pic.twitter.com/C75zcbnKTD

As a result, McAfee got on his yacht, named the Freedom Boat, and sailed into the sunset, or more accurately, Georgetown in the Bahamas.

From there the tech mogul continued his stream of absurd tweets–in which he claimed he would “eat his dick” if the value of Bitcoin didn’t reach $500,000 by the end of 2020, said that he’s had sex with whales, and made some of the worst mixed drinks imaginable–and continued to run his presidential campaign. He also spent a lot of time brandishing assault weapons.

More recently, however, McAfee tweeted that the CIA had “attempted to collect [him],” announcing that his Twitter would be “dark for the next few days.”

The CIA has attempted to collect us. We are at sea now and will report more soon. I will continue to be dark for the next few days. pic.twitter.com/o79zsbxISl

Following this, if his tweets from Monday, July 22 were indeed true, McAfee, his wife, and his bodyguards were trapped at sea for four days.

On Tuesday, however, John’s account was taken over by his campaign manager Rob Benedicto Pacifico Juan Maria Loggia-Ramirez, who said that McAfee and his companions had been detained by U.S. authorities. Law&Crime reached out to Loggia-Ramirez for comment and here’s what he said: “People won’t believe it, but the information that I posted under John’s account is all that I have. John has a lot of friends all over the world, and we are all working to locate him and secure his release if necessary.” 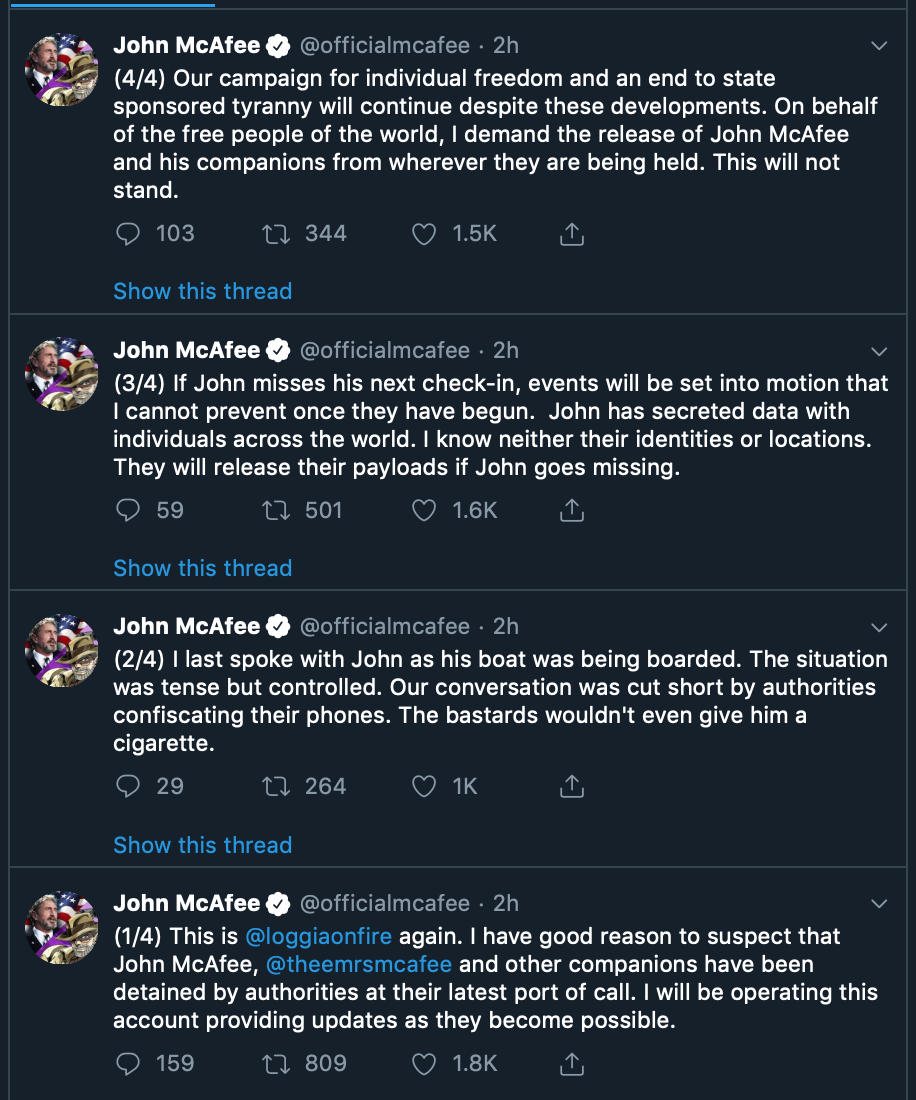 Subsequent tweets were posted from McAfee’s account Tuesday evening by Loggia-Ramirez, saying this was “not a publicity stunt.” He added the hashtag #freemcafee. 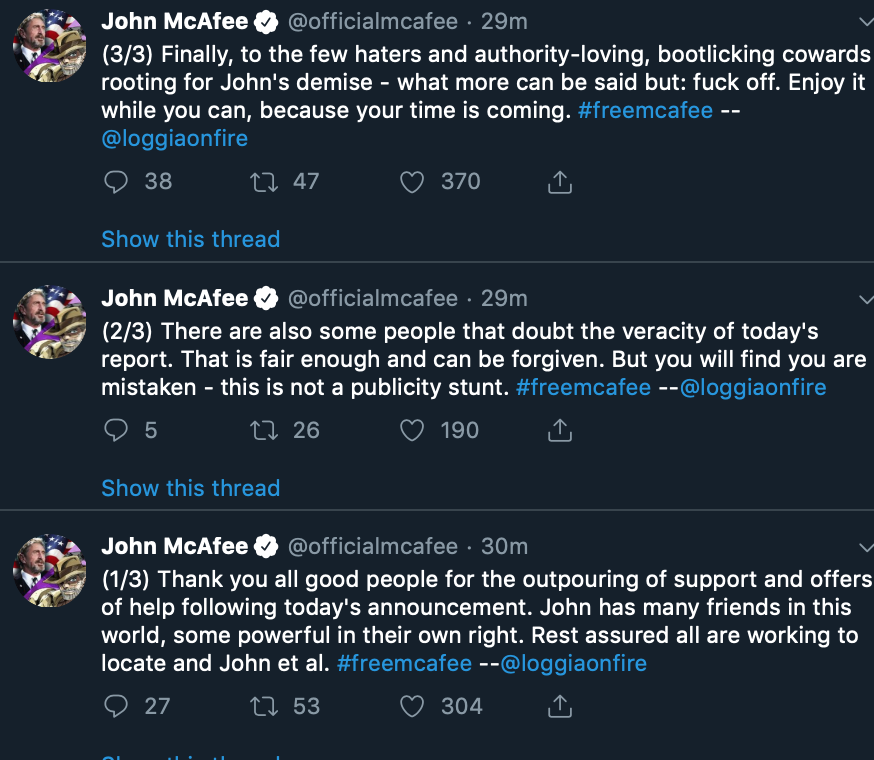 Update, July, 24: Loggia-Ramirez says “John, Janice and his crew are alive and in the process of being released from confinement.”

Update via @Loggiaonfire : John, Janice and his crew are alive and in the process of being released from confinement. For their continued safety no more details are being given. Expect another update, hopefully from the man himself, tomorrow. #FreeMcAfee