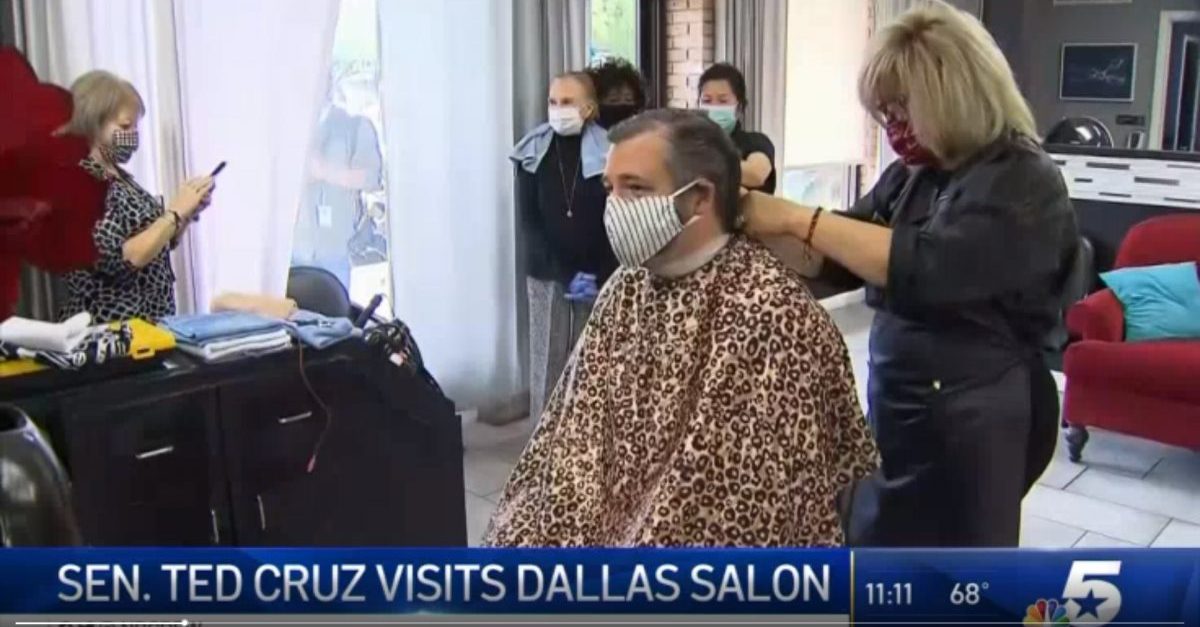 Salon owner Shelley Luther has barely been out of jail for one day after a Dallas County judge sent her to the slammer for contempt of court amidst a broader legal battle over alleged violations of coronavirus shutdown orders. Her fame has no doubt resulted in her first high-profile client: Sen. Ted Cruz (R-Texas).

Yes that’s TX Sen. Ted Cruz getting a haircut in the salon owned by a woman who was jailed for defying a state order. She was released Thursday after TX Supreme Court ordered it. pic.twitter.com/q38jTQQkSy

Hair salons & barbershops are open in TX today. Just got my hair cut for first time in 3 months at Salon ALa Mode to support Shelley Luther, who was wrongly imprisoned when she refused to apologize for trying to earn a living. Glad Shelley is out of jail & her business is open! pic.twitter.com/yJD8fWb84W

Cruz, like many Americans who are sporting less-than-standard hair cuts these days, no doubt yearns for the services of a professional stylist, but the implications of the visit and its timing were impossible to miss.

“We’re thrilled to be with you and know the whole State of Texas is standing with you, so thank you for your courage,” Cruz told Luther according to a report on KTVT-TV, the CBS affiliate in Dallas.

“It’s a nice gesture. His family actually called my boyfriend and prayed for him for 20 minutes while I was in jail. To me that’s not political,” Luther told KTVT. “That’s just really nice people reaching out and making sure that our family is okay.”

“Sen. Cruz coming is something I would have never dreamed of,” Luther said according to KXAS-TV, the local NBC affiliate.  “My daughter getting to meet someone so influential — it’s overwhelming in a great way,” Luther added. “I’m not going to take any of this experience for granted.”

The case has been a rallying cry for conservatives, libertarians, and Republicans. Cruz, on Twitter, said Luther was “wrongly imprisoned when she refused to apologize for trying to make a living.”

Shelley Luther was wrongly imprisoned when she refused to apologize for trying to make a living. Today, I went to get my hair cut at Shelley’s salon to show my support for her, her small business, and all business owners trying to safely help Texans get back to work. pic.twitter.com/oUjdLmM4Ax

Cruz wasted little time in spreading the press coverage he knew he would receive all over Twitter:

Texas Sen. @tedcruz‘s new hairdo is brought to you by Salon A la Mode!

Cruz gets haircut at Texas salon after owner was freed from jail. https://t.co/iZBzrfUXAf

.@startelegram: U.S. Sen. Ted Cruz decided to get a haircut Friday at Salon à la Mode in Dallas….“I’m proud to stand with Shelley Luther,” Cruz said after his hair cut. “What happened to her was wrong.” https://t.co/w0jP6wGisx