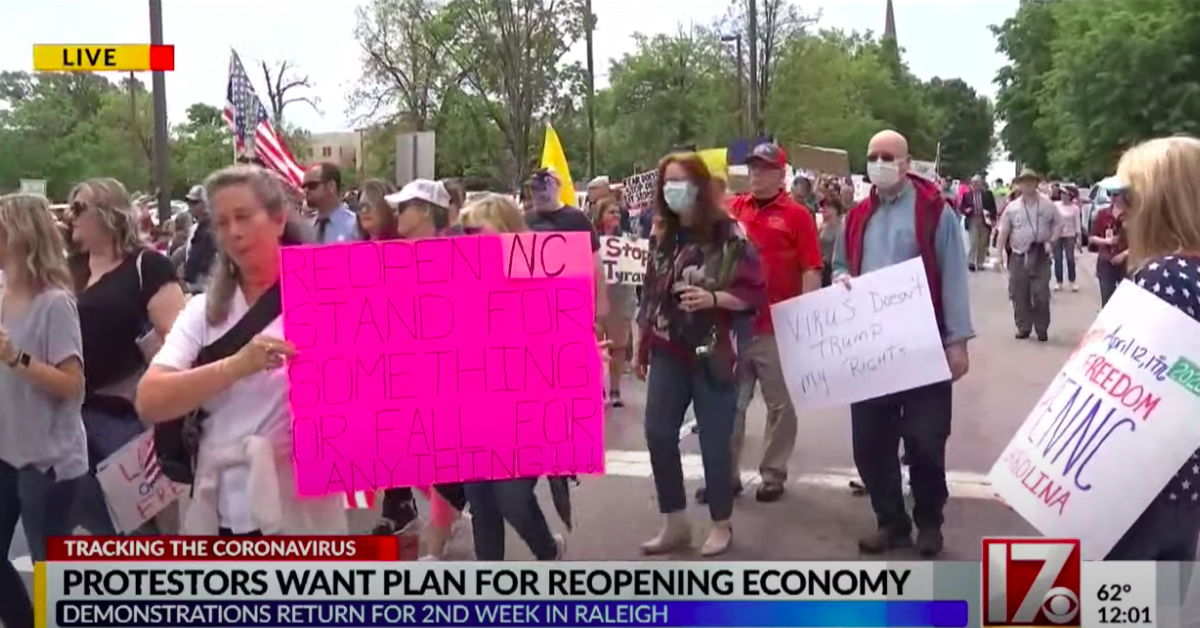 A leader of the “Re-Open North Carolina” movement, in which demonstrators have been protesting against Democratic Gov. Roy Cooper’s stay at home order, said that she had recently tested positive for the novel coronavirus COVID-19.

Audrey Whitlock, an administrator for the Reopen NC Facebook page, said Sunday that she just completed her 14-day quarantine on April 26, local news outlet ABC11 reported. The post in which she said she was asymptomatic has been deleted, per the outlet.

According to the report, Reopen NC organized a protest outside the North Carolina General Assembly on April 21. The protest attracted a crowd of approximately 300 people, many of whom did not follow social distancing guidelines required under Gov. Cooper’s stay-at-home order.

Despite stating that she was under orders to quarantine until April 26, Whitlock refused to tell ABC11 whether she attended the April 21 demonstration, stating only that she had “no comment.”

ABC11 reporter Jonah Kaplan later reported that other leaders of Open NC confirmed that Whitlock did not attend the April 21 rally and instead stayed under quarantine and “respected all [North Carolina Department of Health and Human Services] guidelines.”

Whitlock had railed against be “forced” to quarantine, claiming it violated her First Amendment rights.

“The reality is that modern society has not been able to eradicate contagious viruses. A typical public health quarantine would occur in a medical facility. I have been told not to participate in public or private accommodations as requested by the government, and therefore denied my 1st amendment right of freedom of religion,” Whitlock wrote, according to local outlet WBTV.

“It has been insinuated by others that if I go out, I could be arrested for denying a quarantine order,” she added.

Whitlock ended her post by promoting the group’s next protest, which organizers told local news outlet WRAL would take place on Tuesday, April 28 at the state legislative building.