The plaintiffs’ legal position is pretty straightforward: they believe the “dangerous conditions” of close quarters living (and even masklessness during meals and otherwise) poses an extreme health threat in jails, thus incarcerated people should be granted the same eligibility for vaccination that jail employees have been granted.

New York City’s plan to distribute vaccine in phases, plaintiffs note, lists “corrections” personnel and homeless shelters, among other groups, under phase 1b. 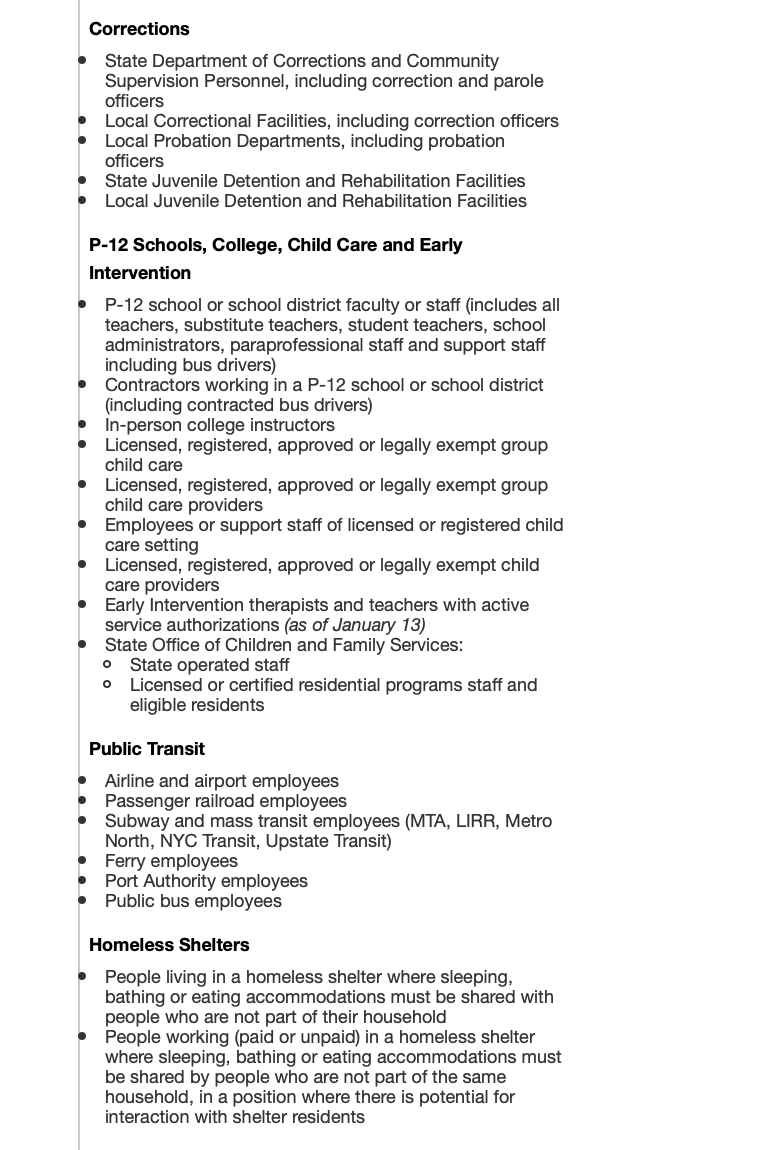 Plaintiffs argue that jails are precisely the high-risk congregate living settings for which the CDC has recommended prioritizing vaccination—and for incarcerated people and jail employees “at the same time”:

The CDC has not only called for the vaccination of incarcerated individuals, it has also recommended that States should “vaccinate staff and incarcerated/detained persons of correctional or detention facilities at the same time because of their shared increased risk of disease” (emphasis in original).

In recommending priority for vaccine eligibility, the CDC has additionally included both incarcerated individuals and others living in congregate settings in the same high-risk category. Specifically, given the increased rates of COVID-19 transmission in congregate living settings, the CDC has advised that states should consider authorizing vaccinations for individuals in congregate living facilities, including those in correction or detention facilities during the 1b vaccination phase.

Both Holden and Frias noted that jails are not just packed in tight, the lack of ventilation and daily instances of masklessness mean that heightened risk of COVID-19 transmission is real:

Holden said in statement that COVID-19 pandemic is “getting worse” and that people around him are “getting sick.”

“[T]here’s a high rate of infection, and it feels unsafe. My dorm is nearly full, we sleep in beds that are inches apart and people are unable to wear masks,” he said. “We need the vaccine now or it will get worse. The irresponsibility of the state to overlook incarcerated people is despicable.”

Frias said that he has asthma and worries he’ll get sick next.

“[Riker’s] is very unsanitary and risky. It is impossible to stay six feet apart. You eat together, you use the same showers. DOC does not supply masks within the housing area, so people are walking around without masks,” he said. “I am simply asking to be treated fairly and with dignity.”

The directors of the aforementioned public defender advocacy groups, citing the disproportionate impact of the virus on people of color, each released statements urging the governor to act before it is too late.

Executive Director of Brooklyn Defender Services Lisa Schreibersdorf explained the lawsuit by saying New York State has “acknowledges the grave risk from COVID faced by people working and living in congregate settings by prioritizing correctional staff and people living in shelters and nursing homes,” but has failed to extend that “same protection” to incarcerated people living “crowded, unsanitary, and inhumane” circumstances.

Law&Crime reached out to the governor’s press office for comment on the lawsuit.

“As the Governor recently announced, among those included in Phase 1b vaccination are NYS DOCCS personnel, including correction and parole officers, who can begin signing up for the vaccine,” New York State Department of Corrections and Supervision spokesman Thomas Mailey said in a statement. “DOCCS is still working with NYS DOH to develop a plan, as part of the New York State COVID-19 Vaccination Program, for the incarcerated population.”

“The entire incarcerated population has been tested for COVID-19 and an asymptomatic testing program is currently underway. Also, the Department has implemented a regular, voluntary staff testing program at each of its facilities statewide,” Mailey added.

A subsequent statement from Mailey said that “[t]here are 1,075 people who are in the system who are 65 and older, and DOCCS is in the process of preparing to vaccinate that population consistent with statewide guidance for that age group.”

The public defender groups responded with a joint statement on Thursday night, saying that this has “little to do with the patently illegal and immoral practice challenged in court today.”

“Today’s announcement that New York will begin moving toward offering the vaccine to elderly people in prison — who have been eligible for the vaccine now for weeks,” the statement said. “COVID-19 is a danger for incarcerated people of all ages because of the unique risks that the carceral setting creates. That danger is borne overwhelmingly by people of color. Every single person incarcerated in New York state needs access to the vaccine. Public health experts advise the Governor to make it available to all incarcerated people immediately, and the law mandates it.”