Pa. Neighbors Got into an Argument About Shoveling During Massive Snowfall. One of Them Opened Fire. 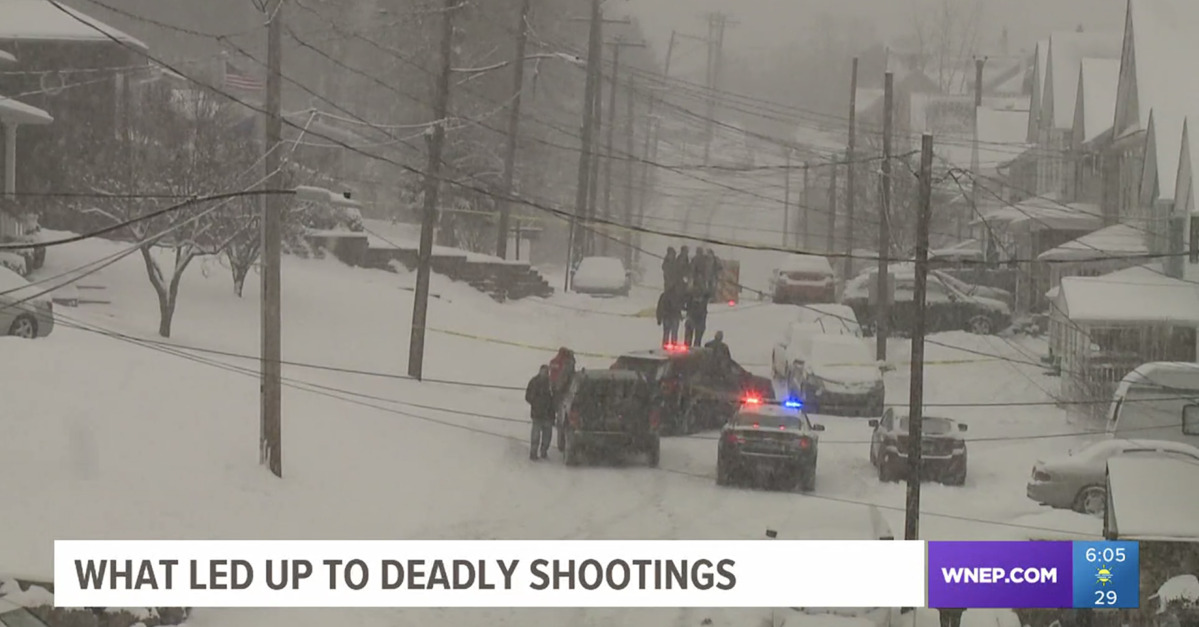 Shouts turned to threats; sprays of crimson on white. A crime of passion transformed into a grisly execution. And a child orphaned after a triple murder-suicide over a long-running dispute among neighbors.

James Goy, 50, Lisa Goy, 48, and Jeffrey Spaide, 47 are all dead now. The end product of 15-20 shots fired from two separate guns over the course of an argument about snow shoveling.

According to authorities, the incident occurred sometime before 9 a.m. on Monday. Officers from Plains Township, Penn., a village of less than 10,000 residents near Scranton in the northeastern corner of the state, responded to a report of shots fired. The Goys were found lying dead in the street in front of their own home.

Investigators pieced the tragedy together through the use of witness testimony and security camera footage, Salavantis and Binker said.

And, according to several interviews with surviving neighbors, the two households had something of a Hatfield and McCoy-like history, having previously been involved in various “prior disputes.”

Those disagreements all came to a head after a recent Nor’easter brought a whiteout to the region, blanketing portions of the Keystone State, including the Scranton region, in over two feet of snow.

“During the exchange, Mr. Goy threw an implement he was using to clear snow from his car and approached Spaide in the street, cocking his fist at Spaide,” the statement continues. “Spaide retreated into his house. The Goys proceed[ed] to yell at him, and, using expletives, the parties called each other names. Mr. Goy then threatened Spaide and is seen [in video footage] making obscene gestures at him.”

Seconds after that, according to police, Spaide returned with a handgun–catching the attention of the Goys, who continued shouting at their neighbor despite the acknowledged presence of his firearm. Then Spaide began shooting.

The couple apparently didn’t react until multiple rounds were fired and they were “eventually struck” by the bullets. Spaide then moved in closer, police said, firing “multiple rounds at close range” before returning to his home to replace the pistol with an AR-15-style rifle.

The semi-automatic in hand, Spaide then emptied at least two more rounds into the bodies of his already-fatally-wounded neighbors. By then police were on the way to the scene. The gunman quickly returned to his own home to reconsider the morning’s events.

Another neighbor told authorities they saw Spaide pacing back-and-forth in front of a window. Police arrived just after that, and were directed to Spaide’s home after surveying the useless carnage, but the man’s decision was made up and his actions irreversible.

As officers made their way to his home, a single shot rang out; Spaide was dead.

“The investigation having been completed, Luzerne County District Attorney Stefanie Salavantis has indicated that the matter will be closed pending the formal, public pronouncement of cause and manner of death by the Coroner which has already been provided to investigators,” the official statement concludes.

The couple left behind a 13-year-old son who is reportedly autistic. He is currently being watched after by his grandparents.