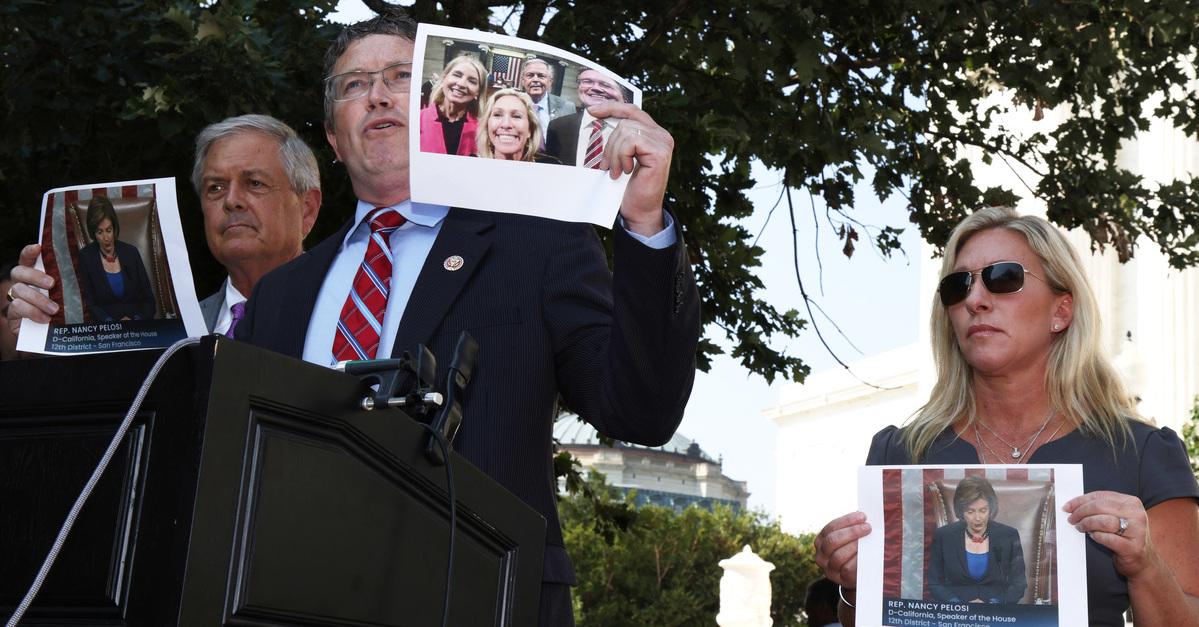 “Maybe if we took this pandemic seriously we wouldn’t have so many Americans in the grave,” Senior U.S. District Judge Reggie Walton cut to the chase Thurday during oral arguments in a case about the House of Representatives’ mask mandate.

While the George W. Bush-appointed judge’s questions clearly suggested his discomfort with the position taken by a small minority of GOP members who have been fined for violating the mandate issued by House Democrats, Walton declined to rule from the bench “because this is a matter of first impression” and wanted to issue a “written opinion” sometime within the next 30 days, before he goes on vacation, he said.

The case been stylized as Massie v. Pelosi (after Republican Rep. Thomas Massie and House Speaker Nancy Pelosi) and largely turns upon the punishment exacted against Republican members of Congress who have and are repeatedly in violation of the mandate that was advised by the attending physician of Congress. Rep. Marjorie Taylor Greene (R-Ga.), for example, has already been fined thousands of dollars.

The legal team for Greene and her fellow travelers contend that such fines are impermissible violations of the 27th Amendment to the U.S. Constitution, which they argue takes such fines off the table.

The amendment in question reads:

No law, varying the compensation for the services of the Senators and Representatives, shall take effect, until an election of Representatives shall have intervened.

“There can be a mask requirement,” argued Christopher Wiest, attorney for the Republicans–insisting the mandate’s enforcement mechanism is unconstitutional. “The method of enforcement is the actual reduction of the take-home pay. There has to be a constitutional limitation on how they enforce their rules. And there is.”

At core, the attorney argued, the case was about the concept of “legislative independence.”

“It is an independence issue, to make sure their compensation isn’t going to be changed as a legislative cudgel,” Wiest said. “This case is really not about a mask mandate or COVID-19, but, rather, about fundamental constitutional principles that transcend the issue [about] the rule.”

For Congress, however, the issues are much simpler and dire: it’s really, and quite literally, they say, a matter of life and death.

“The attending physician of Congress responds to a massive pandemic,” House general counsel Douglas Letter argued–setting the backdrop for why the rule was issued: “Members of Congress have sickened other members and staff.”

“Here we have a situation of extreme danger,” the attorney arguing on behalf of House Democrats went on. “This is something that passes from breathing. By nature of the fact that you breathe, you get it, and you may die. Yes, we’re talking about an atmosphere. We’re talking about something that is all around. So, the House adopted Resolution 38 to provide a system so that members would follow these requirements that have been imposed by the attending physician.”

Walton’s treatment of the House attorney initially consisted of largely sympathetic questions requesting data about the number of deaths and illnesses directly attributable to COVID-19 within the House itself–detailing the pandemic’s impact on members of Congress, staff and congressional police officers.

The judge specifically requested: “any statistic regarding the number of House members who have died or became ill because of the virus, same for staff, same for the police services, [as well as any statistic] regarding the number of congressional staff members who are of the age who make them more susceptible or have underlying medical conditions that make them more susceptible.”

Continuing his argument before the receptive court, Letter said recent precedents were on his side and that the GOP members’ complaint should be dismissed under the Speech and Debate Clause of the U.S. Constitution.

In each case, the attorney argued, congressional plaintiffs said they were being pursued for their speech and beliefs but in each case courts said, “we know you think this is bad” but “take it up with the Framers,” Letter loosely paraphrased.

“It doesn’t matter that what you think is happening is terrible,” Letter continued.

Wiest, for his part, largely hewed to the argument that taking “hefty” chunks out of members’ paychecks was unconstitutional. At one point, though, he suggested Letter was arguing “that there is no limiting principle for what they can do.”

Walton mutedly upbraided him for that characterization.

“Maybe I missed it,” the judge said before noting that he “didn’t hear” Letter say that.

The judge went on to aggressively press Wiest on the death and havoc the pandemic has brought so far.

“Are you saying that [members of Congress] have to subject themselves to possible illness or death from people who won’t wear a mask that would otherwise protect them?” Walton asked, his voice rising.

Wiest went on to say there were other methods of enforcing the mandate and at one point said: “I think the pandemic is real.”

Letter dismissed compensation concerns viz. the 27th Amendment by likening the House’s rule and enforcement of said rule to a professional athlete who is paid $10 million and fined for violating league rules.

“Imposing a fine or penalty does not change compensation,” he said.

“When you’re taking away somebody’s ability to earn a living, that is a powerful, powerful cudgel,” Wiest argued–referencing a quote attributed to Alexander Hamilton. “It is mere wordplay to suggest it is not a reduction in compensation.”

This was the Hamilton quote Wiest was referring to, as seen in court documents:

“In the general course of human nature, a power over a man’s subsistence amounts to a power over his will.” Alexander Hamilton, Federalist Paper No. 79 (May 28, 1788).

As the hearing drew to a close, Walton spent several minutes grilling Wiest about whether not wearing a mask inside the areas covered by the rule amounted to disorderly conduct. The attorney repeatedly said that it was not–seemingly not convincing the judge.

“Your honor, he’s wrong,” Letter said in response, saying that several lay and legal dictionaries and case law — including a concurring opinion by then-D.C. Circuit Judge Brett Kavanaugh, where the current justice mentions “expansive authority” for Congress to discipline members — support the idea that disorderly conduct occurs with any “violation of House rules.”