Can Europeans Legally Travel to the United States?

COVID-19 Questions: Can Europeans Legally Travel to the United States? 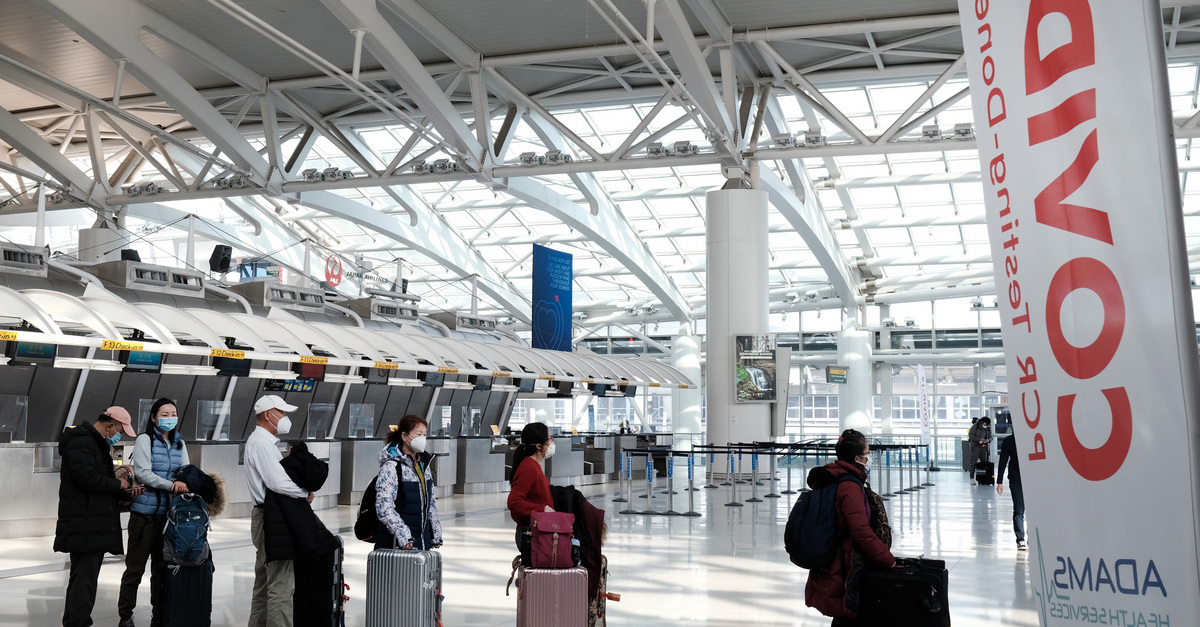 NEW YORK, NEW YORK – JANUARY 25: People wait for a flight at an international terminal at John F. Kennedy Airport (JFK) on January 25, 2021 in New York City. In an effort to further control Covid-19 transmission, President Joe Biden plans to sign restrictions on travel to the United States. The ban will prohibit travelers from the United Kingdom, Ireland and 26 countries in Europe that allow travel across open borders, called the Schengen Area. The new measures will also block entry to travelers from Brazil and South Africa.

As nations move toward a post-COVID future, would-be travelers are anxious to return to the world’s third-favorite tourist destination:  the United States. But can they? And can Europeans, in particular, legally make their way to the United States of America?

The answer to this iridescent question is, as is often the case with legal inquiries, complicated; it depends on many factors.

Let’s take a look at the state of play.

The basic stance right now is: Europeans from the Schengen Area are not allowed to enter the United States.

Presidential Proclamation 10143, which relates to “the Suspension of Entry as Immigrants and Non-Immigrants of Certain Additional Persons Who Pose a Risk of Transmitting Coronavirus Disease” is the controlling directive at present. This executive branch order from President Joe Biden reimposes a travel ban originally issued–and later rescinded–by former president Donald Trump which applied to most of Europe, the United Kingdom and the Republic of Ireland.

“As the summer holiday season approaches, vaccinated Europeans who wish to sample breathtaking U.S. destinations such the Grand Canyon, the Golden Gate Bridge, and Glacier National Park will have to continue with the wait-and-see approach,” Washington, D.C.-based travel attorney Chun T. Wright told Law&Crime. “Tourists from the Schengen Area of Europe, as well as the UK and the Republic of Ireland, remain suspended from entry into the United States in an effort to help slow the spread of COVID-19.”

There are, of course, concomitant “specified exceptions” to the current travel ban for travelers in areas covered by their respective proclamations, according to the Centers for Disease Control and Prevention (CDC) — but the general rule remains in effect much the same way it has since originally issued in March 2020.

And there are changes in the offing — both would-be and realized.

“Lots of waivers and limitations on liability,” travel law expert and attorney Laurence Gore told Law&Crime — noting that numerous “contract changes” are in the works that will impact the livelihoods of travel agents and tour companies as the recovery process continues.

“[T]he travel industry is urging the UK and US to establish a transatlantic travel corridor that would help the US economy and save over a million jobs,” Wright added. “Vaccination rates in the U.S. have not yet hit their targets so until they do, I expect the United States government will be very cautious about when and how to open its borders to European and other visitors. There is enormous pressure on all governments to reopen so it would not be surprising to see some limited loosening of restrictions.”

On April 26, 2021, Secretary of State Antony Blinken expanded the pool of eligible travelers by issuing a proclamation that established eligibility for those “who are seeking to provide vital support for critical infrastructure; journalists; students and certain academics covered by exchange visitor programs” to possibly qualify for a National Interest Exception (NIE) to the general rules.

Europeans with a negative COVID test.

Those Europeans who can travel to the United States due to various exceptions based on various factors aren’t just given carte blanche access to the country; they still have to abide by basic public health considerations. That means a negative coronavirus test.

Current guidance from the U.S. Department of State notes:

Effective January 26, the Centers of Disease Control and Prevention (CDC) will require all air passengers entering the United States (including U.S. citizens and Legal Permanent Residents) to present a negative COVID-19 test, taken within three calendar days of departure or proof of recovery from the virus within the last 90 days​. Airlines must confirm the negative test result or proof of recovery for all passengers two years of age and over prior to boarding. ​Airlines must deny boarding of passengers who do not provide documentation of a negative test or recovery.

“European travelers may travel to the United States by air but they must provide a negative COVID-19 viral test taken within three calendar days of travel,” Daniel R. Zim, of Zim Travel Law, PLLC told Law&Crime in an email. “This restriction applies to all airline passengers from Europe including US citizens and legal permanent residents over the age of two.”

But to be clear: a negative test doesn’t get a would-be visitor to New York City out of the woods viz. the general guidelines.

Europeans who are vaccinated.

So, are there any special accommodations for Europeans (or other non-U.S. citizens) who are fully vaccinated?

Not really — at least not formally.

In other words:  a vaccinated person is far more likely to obtain a negative COVID-19 test result — which is still mandatory for entry into the United States — so, in a sense, a vaccination makes it far more likely that a traveler can enter the United States. However, there aren’t any current exceptions that allow vaccinated travelers to leapfrog the other longstanding and preexisting rules.

On April 27, 2021, however, the CDC issued a series of guidelines that said travelers who are fully vaccinated don’t need to be so stringent about taking certain precautions — such as no longer needing to self-quarantine following arrival in the United States. But again, this public health guidance doesn’t supersede the general barriers to entry.

“Do not travel internationally until you are fully vaccinated,” the CDC suggests. “CDC will update these recommendations as more people are vaccinated, as rates of COVID-19 change, and as additional scientific evidence becomes available.”

“[T]hings seem to change almost daily,” Gore added. “The restrictions on returning can also make a large difference. We simply have not seen any European travelers in numbers as would be usual for this time of year. We anticipate by mid Summer that borders all around will be open but under the vaccination and/or test guidelines. The travel industry is certainly ramping up again, at least for late summer travel.”

In a follow-up email, Gore provided commentary from Czech Republic-based International Forum of Travel and Tourism Advocates member and leading European travel law attorney Klara Dvorakova who suggested that, in spite of the general guidance, implementation of the rules has been less than generalized and might very well depend upon which European country you’re actually coming from when attempting to enter the United States.

“There is definitely no common approach, but there is probably also not much of any regulation because the conditions are set by the U.S. side,” she wrote in an email — while also noting that the European Union is working on the issuance of a vaccine passport known as a “Digital Green Certificate” to facilitate intra-EU travel.

There’s been a bit of online chatter about Europeans possibly being able to bypass COVID travel restrictions by traveling to Mexico first–for at least 14 days in order to quarantine–and then traveling on through to the United States. One travel lawyer we surveyed advised against that idea.

“In terms of entering through Mexico, the land border between the U.S. and Mexico is closed to all travel except for that deemed ‘essential.’ Air travel from Mexico is permitted, but again, subject to entry protocols and testing requirements,” New York City-based travel attorney Thomas R. Carpenter told Law&Crime. “Individuals who aren’t in compliance are denied boarding on flights inbound to the U.S.”

“Over the past year, the protocols, testing, and quarantine requirements for international travel have changed frequently, and sometimes without notice,” he continued. “Any leisure traveler that is trying to do an ‘end run’ around entry and protocol requirements does so at their own peril, in my view. My recommendation would be to review the list of restrictions on the CDC website and the executive order issued by President Biden related to travel from the Schengen zone before making any non-refundable reservations for travel.”

The U.S. Secretary of Health and Human Services is authorized by federal statute to enact quarantine and isolation measures to prevent the spread of communicable diseases from other parts of the world into the United States.  The power to do so emanates from 42 U.S.C. § 264. The Secretary delegates enforcement power to the CDC, which wrote 42 C.F.R. § 70 and § 71 to describe how it carries out its mission when it comes to protecting territorial sovereignty against pathogens such as the novel coronavirus:

CDC is authorized to detain, medically examine, and release persons arriving into the United States and traveling between states who are suspected of carrying these communicable diseases.

As part of its federal authority, CDC routinely monitors persons arriving at U.S. land border crossings and passengers and crew arriving at U.S. ports of entry for signs or symptoms of communicable diseases.

When alerted about an ill passenger or crew member by the pilot of a plane or captain of a ship, CDC may detain passengers and crew as necessary to investigate whether the cause of the illness on board is a communicable disease.

Editor’s note: this article has been amended to include an additional quote and section on travel to Mexico.