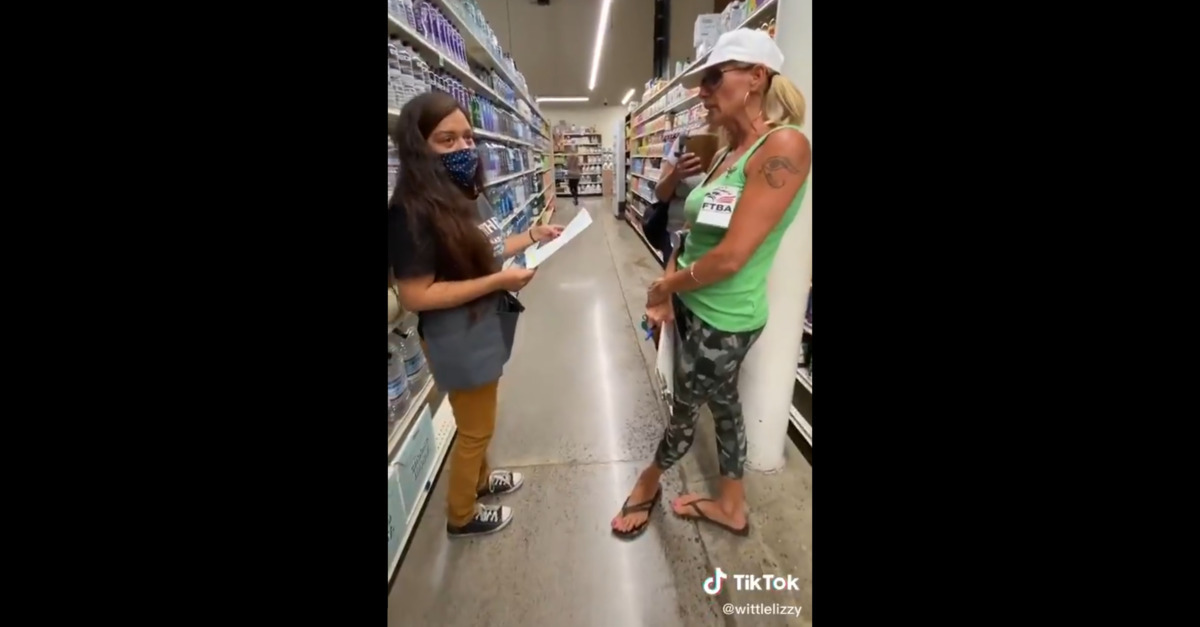 Anti-mask activists pretending to be federal agents are violating federal law, according to a former federal prosecutor.

A viral video of people purporting to be affiliated with the so-called “Freedom to Breathe Agency” (FTBA) has been viewed several million times since being cross-posted from TikTok to Twitter on Friday.

“We are with FTBA, the Freedom to Breathe Agency,” a woman wearing a white baseball cap and sunglasses tells a grocery store worker in Laguna Niguel, California, “Making sure that people’s constitutional rights–civil and federal laws–are not broken. Okay? And so you, personally, need to take this to your manager. Because you, personally, can be sued for this, okay?”

The woman pretending to be a federal agent has since been identified as “detox” maven and spiritualist Lenka Koloma, in a Change.org petition calling for charges to be filed by the Federal Trade Commission. Koloma was previously reported to be the FTBA’s “founder” by ABC News in late June.

Koloma goes on to discuss the worker’s wages as not worth the effort of (non-existent) legal liability for mask-wearing.

“You are probably paid $15 dollar an hour or $12 an hour okay, but you are putting yourself into major legal liability,” she says as the person recording the incident audibly expresses their disdain for her wage-shaming. “You, personally, okay?”

The worker walks away feigning interest and rolling her eyes.

“You guys need to be careful!” Koloma insists as the video ends.

But aside from rude and factually wrong, what Koloma and her accomplice are doing appears to be in violation of federal law.

“This is a crime and these people should be prosecuted,” former Illinois assistant U.S. Attorney Renato Mariotti said on Twitter.

Whoever falsely assumes or pretends to be an officer or employee acting under the authority of the United States or any department, agency or officer thereof, and acts as such, or in such pretended character demands or obtains any money, paper, document, or thing of value, shall be fined under this title or imprisoned not more than three years, or both.

It is presently unclear if any such investigation has been initiated.

The U.S. Department of Justice (DOJ) went so far as to issue an official statement debunking the FTBA, their claims and their false affiliation with the federal government in late June.

“Do not be fooled by the chicanery and misappropriation of the DOJ eagle,” U.S. Attorney for the Middle District of North Carolina Matthew G.T. Martin said in a statement. “These cards do not carry the force of law. The ‘Freedom to Breathe Agency,’ or ‘FTBA,’ is not a government agency.”

An archived version of the FTBA’s Facebook page explains their science-like but non-scientific opposition to masks:

Oxygen is No.1 nutrient for every living organism including humans. Wearing a mask is an unhealthy obstruction of oxygen flow that can lead to hypoxemia and hypoxia, can permanently damage the brain, lungs, heart and about any organ. We must protect our birth right to breathe. This is NOT negotiable. FTBA is an agency designed to stop face mask orders from spreading nationwide and globally.

The FTBA’s attempted biology lesson is apparently made in service of the often-repeated right-wing myth that face masks lower oxygen levels when worn. That claim, while frequently repeated by conservative activists, is decidedly not true.

The viral video of the FTBA adherents attempting to intimidate a grocery store worker is likely to add additional dimensions to the battle between myopic personal choice advocates and those genuinely concerned with public health.

Koloma defiantly posted on Instagram in response to the furor:

Message to all the haters that stormed my IG account today: “Thank you. Thank you for showing your ignorance to what the United States of America stands for. Our republic was built on promises of freedom and personal liberty. I have lived in communism where the government dictates what you can and cannot do. You have no idea or reference. If you want to wear a face mask please feel free to do so. Just please allow others to make their own educated decision. If you cannot see through all the lies and corruption you are lost and asleep. For the rest of us, the true patriots, our fight goes on and you only bring the needed attention to our cause. So, thank you. Just remember that hate and anger will never bring you an inner peace. We feel for you and see that you are hurting for which we send tons of love and healing light your way because that’s who we are. Namaste”