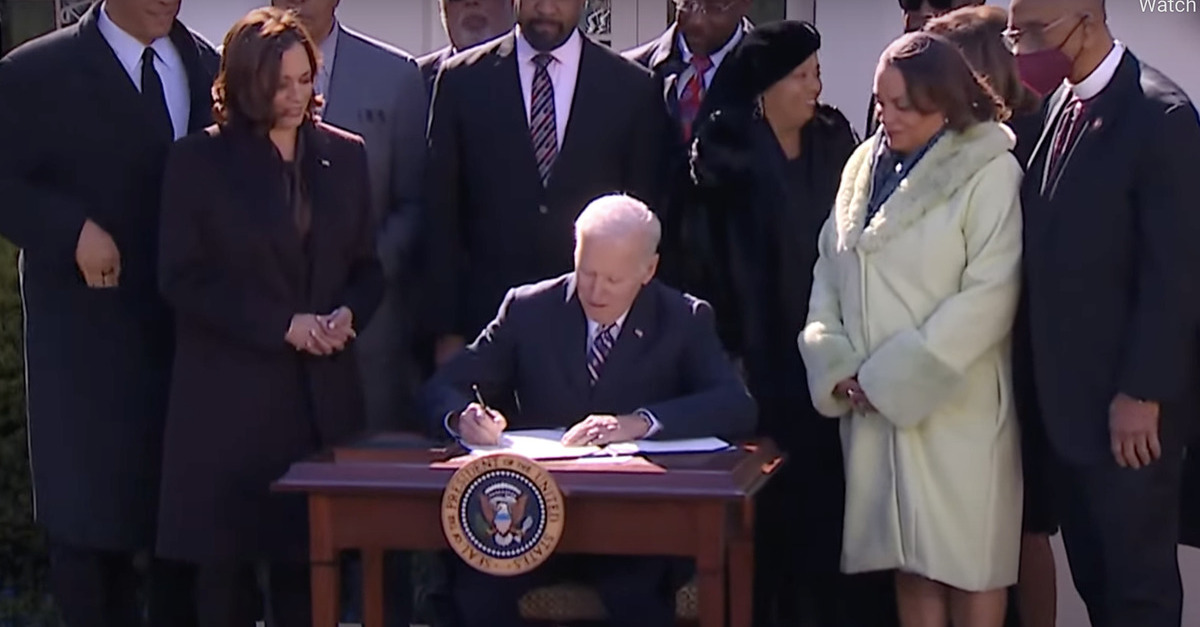 President Joe Biden signed the Emmett Till Anti-Lynching Act into law Tuesday, making lynching a federal hate crime. Under the law, it is possible to prosecute a crime as a lynching when a conspiracy to commit a hate crime results in death or serious bodily injury. The resulting offense is punishable by up to 30 years in prison.

@POTUS Signs the Emmett Till Antilynching Act of 2022. What an honor for our co-founder & cousin of #EmmettTill @DeborahWattz along w/her daughters, granddaughter & other relatives to attend to witness this historic day #JusticeForEmmettTill https://t.co/gAMdw7LMqZ via @GlamNiki

“Racial hate isn’t an old problem — it’s a persistent problem,” said the president as he signed the bill.  “Hate never goes away. It only hides.”

The main text reads as follows:

Section 249(a) of title 18, United States Code, is amended by adding at the end the following:

“(5) LYNCHING.—Whoever conspires to commit any offense under paragraph (1), (2), or (3) shall, if death or serious bodily injury (as defined in section 2246 of this title) results from the offense, be imprisoned for not more than 30 years, fined in accordance with this title, or both.

The law extends both the definition and the penalty for lynchings. Rush has said that the legislation is significant because, “Lynching is a longstanding and uniquely American weapon of racial terror that has for decades been used to maintain the white hierarchy.”

Prior to being signed into law by the president, the bill received unanimous support in the Senate and a vote of 422 to 3 in the House, with Representatives Chip Roy (R-Texas),  Andrew S. Clyde (R-Ga.), and Thomas Massie (R-Ky.) voting against it.

The bill is named for Emmett Till, the 14-year-old Black boy who became a posthumous civil rights icon after he was brutally tortured and murdered in Mississippi in 1955, after a white woman made false claims against him.

When the bill passed in the Senate, Senate Majority Leader Chuck Schumer (D-N.Y.) said, “After more than 200 failed attempts to outlaw lynching, Congress is finally succeeding in taking a long overdue action by passing the Emmett Till Anti-Lynching Act.”

Sen. Booker tweeted that he was “overjoyed” about the bill’s passage in the Senate, saying, “the time is past due to reckon with this dark chapter in our history.”

I am overjoyed with the Senate passage of the Emmett Till Antilynching Act. The time is past due to reckon with this dark chapter in our history and I’m proud of the bipartisan support to pass this important piece of legislation.

Booker later appeared on The View, said the bill brought him “a tremendous sense of relief” and that he ” feels our ancestors exhaling.

Today when President Biden signs the Emmett Till Antilynching Act, after 100 years of efforts, history will finally be made. pic.twitter.com/vHt4Cj9BhV

“Racial hate isn’t an old problem — it’s a persistent problem,” Biden said during the signing. “Hate never goes away. It only hides.”

Rush is also the sponsor of pending legislation to honor Emmett Till and his mother Mamie Till-Mobley. H.R. 2252 would award a posthumous Congressional Gold Medal to mother and son, and H.R. 4581 would direct the Postmaster General to issue a commemorative postage stamp in honor of Mamie Till-Mobley.