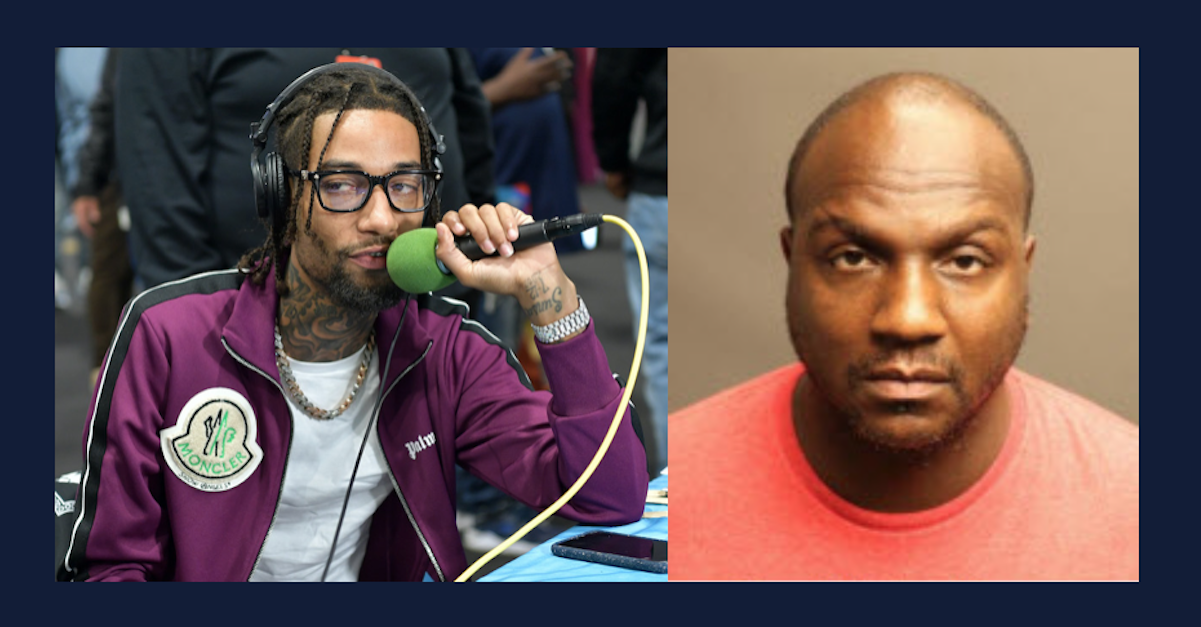 A father and son have been charged with the murder of a rapper and hip-hop artist who was fatally shot as he ate lunch in a Los Angeles restaurant with his girlfriend. Rakim “PnB Rock” Allen, 30, was at Roscoe’s House of Chicken & Waffles in south Los Angeles when a gunman targeted him on Sept. 12.

Police believe Allen was targeted for his jewelry. A federal task force arrested Freddie Lee Trone in Las Vegas on Thursday after a manhunt that included a public plea for assistance.

“The suspect shot Allen and removed some of his property,” according to a Los Angeles County District Attorney’s Office press release. “The suspect also demanded property from Allen’s girlfriend. The suspect fled the location in an awaiting vehicle.”

Trone’s 17-year-old son was picked up in the Los Angeles County suburb of Lawndale on Tuesday. Another apparent relative, Shauntel Monique Trone, 38, was arrested in Gardena and remains jailed on a charge of accessory of after the fact. Police believe the boy was the triggerman and his father the getaway driver, according to NBC’s Los Angeles affiliate.

Both have been charged with murder and conspiracy to commit robbery, as well as two counts of second-degree robbery. The boy was to appear in Los Angeles County’s juvenile court in Compton Thursday, with a pretrial hearing scheduled Oct. 19. Shauntel Trone also was to be in court Thursday, with her arraignment scheduled in the Compton branch of Los Angeles County Superior Court. Police identified her as 32 years old, but jail records list her age as 38.

District Attorney George Gascón said Allen’s murder “dimmed a bright light in the lives of his fans, friends and most importantly his family.”

“The accused individuals’ alleged actions in this case were heartless and cruel and robbed the world of Mr. Allen’s talents,” Gascón said in the release.

Roscoe’s House of Chicken & Waffles, based in Los Angeles with eight locations, mourned PnB Rock in a message posted to social media that called him “an incredible artist in Los Angeles and everywhere.”

“His passing represents an enormous loss to each and every one of us,” the Sept. 12 message said. “Our most heartfelt condolences, thoughts and prayers go to the Allen family at this difficult time. The safety of our employees and guests are our utmost priority. We have and will continue to keep our place of business as safe as possible.”

Founded in 1975 by Harlem native Herb Hudson, Roscoe’s website says it developed a celebrity following burgeoned by Hudson’s “friends in Motown and television, such as Stevie Wonder and Natalie Cole.”

“Other celebrities, like Snoop Dogg, Shaquille O’Neil, and even global leaders including President Obama have enjoyed Roscoe’s House of Chicken and Waffles making it a timeless L.A classic,” according to the website.

Born in Philadelphia, Allen released two albums in 2017 and 2019 after his single “Selfish” hit 51 on the Billboard Hot 100 chart in 2016. He’s collaborated with artists such as Ed Sheeran and Chance the Rapper and had released an independent single called 12 days before his murder. He has two children.

Detectives suspected the attack may have been prompted by Allen’s girlfriend posting a photo from inside the restaurant to Instagram that marked the location. But the Los Angeles Times reported Thursday detectives now believe Drone and his son were outside the restaurant before the post. The elder Trone has a criminal history that includes a conviction for felon in possession of a firearm, for which he’s on active probation.

Some of Allen’s friends in the music world had addressed the social media location rumor, including Cardi B, who said in a tweet the day PnB Rock died that she doubted his killer was looking at his girlfriend’s Instagram.

I highly doubt nikkas was looking at PMB’s babymom IG. He was in a bad location and people stay outside plotting. It’s very irresponsible and inconsiderate to blame her for something so tragic. We should be sending nothing but love to her and his family at this time.

“He was in a bad location and people stay outside plotting. It’s very irresponsible and inconsiderate to blame her for something so tragic. We should be sending nothing but love to her and his family at this time,” Cardi wrote.