Did Kevin Spacey’s Bizarre ‘Let Me Be Frank’ Video Seriously Hurt Him Legally? 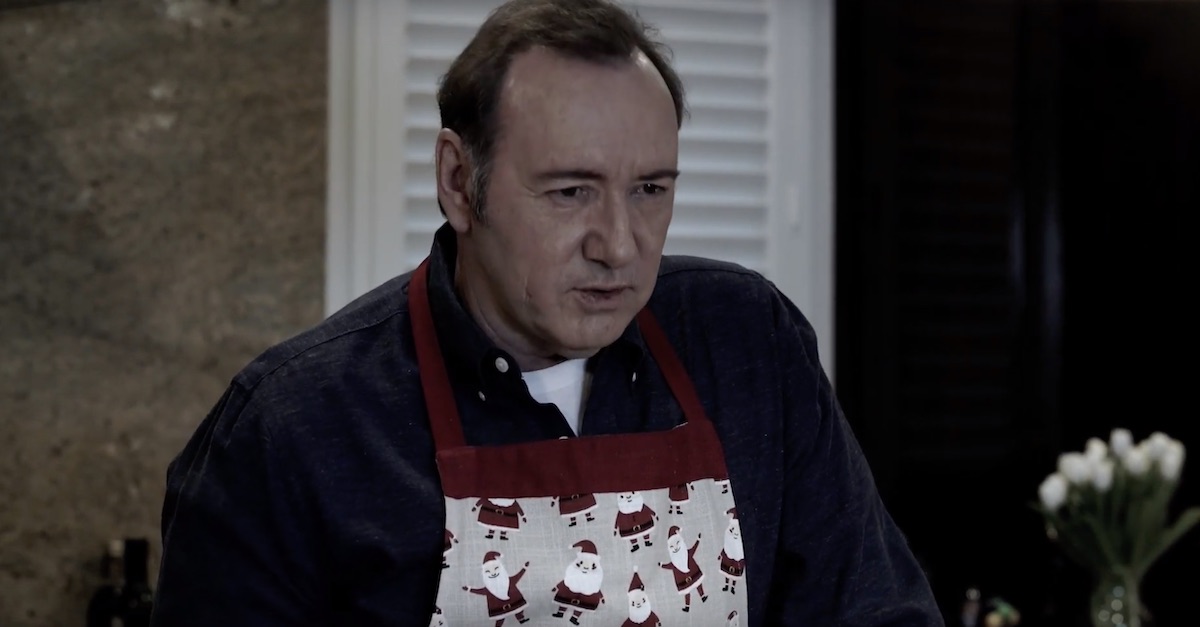 Almost as soon as news broke on Monday, Christmas Eve, that disgraced Hollywood actor Kevin Spacey was charged with indecent assault and battery, Spacey posted a bizarre video on his Twitter account titled “Let Me Be Frank.” Spacey performed as House of Cards character Frank Underwood and, given the timing, appeared to address the accusations against him, giving the title of the video a clear double-entendre.

If we presume that what Spacey had to say, true to the title, was “frank” (i.e. open and honest), this is the kind of thing that would make any criminal defense attorney cringe.

Former prosecutor, current defense attorney, and Law&Crime Network host Julie Rendelman explained why. Rendelman said that although she isn’t sure Spacey will be impacted legally, anything he does say can be used against him.

“While I’m not too sure that presenting himself on a YouTube video as his alter ego diabolical character from House of Cards is smart PR-wise, I don’t think it will impact him legally,” Rendelman told Law&Crime. “With that said, anything he does say can be used against him, so he should simply keep his mouth shut.”

“If he did say something incriminating, I’m not sure he would be able to hide behind the ‘character,'” Rendelman added.

Well, Spacey did not keep his mouth shut.

The video shows Spacey in a Christmas-themed apron washing his hands (hmm… symbolism?) and saying, “I know what you want.” It takes on quite a bit of depth if you assume that Spacey is addressing both his accuser and his former House of Cards audience. Let’s break it down.

You Knew You Shouldn’t Have Trusted Me

“Oh sure, they may have tried to separate us, but what we have is too strong — is too powerful. After all, we shared everything you and I. I told you my deepest darkest secrets. I showed you exactly what people are capable of. I shocked you with my honesty, but mostly I challenged you and made you think. And you trusted me, even though you knew you shouldn’t.”

You Want Me Back

“So we’re not done, no matter what anyone says. And besides, I know what you want. You want me back. Of course some believed everything and have been waiting with bated breath to hear me confess it all.”

You Don’t Believe the Accuser Without Facts, Do You?

“They’re just dying to have me declare that everything said is true and that I got what I deserved. Wouldn’t it be easy if it was all so simple? Only you and I know it’s not that simple, not in politics and not in life. But you wouldn’t believe the worst without evidence would you? You wouldn’t rush to judgement without facts, would you? Did you? No not you, you’re smarter than that.”

Nothing Should Be Off the Table

“Anyway, all of this presumption made for an unsatisfying ending. And to think it could have been such a memorable send-off. I mean, if you and I have learned nothing else these past years it’s that in life and art, nothing should be off the table.”

I Didn’t Pay the Price for ‘Things I Did Do,’ But I Won’t For the Things I Didn’t Do

The Truth Will Come Out

“Well of course they’re going to say I’m being disrespectful not playing by the rules, like I ever played by anybody’s rules before. I never did and you loved it. Anyhow, besides all the poppycock, the animosity, the headlines, the impeachment without a trial. Despite everything, despite even my own death, I feel surprisingly good and my confidence grows each day that soon enough you will know the full truth.”

“Wait a minute, now that I think of it, you never actually saw me die, did you? Conclusions can be so deceiving. Miss me?”

When you read through all of this, there isn’t exactly a smoking gun.

This falls somewhere between desperate and self-incriminating. Prosecutors will likely see this as an early Christmas present. His defense will probably note that this is in character and thus meaningless, while annoyed that they have to deal with this unnecessary stunt at all https://t.co/UlILo4jVTp

Spacey, the Boston Globe reported, will be arraigned on January 7 in the Nantucket District Court for allegedly grabbing the genitals of the 18-year-old son of a former Boston news anchor at a club in July 2016.

The alleged victim’s mother, Heather Unruh, reported the allegations against Spacey to police after, she said, Spacey caused “tremendous anger and anxiety” by groping her son. Unruh reported this alleged felony after others had already accused Spacey of sexual misconduct and assault (charges were dropped in September because of the statute of limitations). Spacey is also under investigation in the UK for three other sex assault allegations.

Mitchell Garabedian, the Boston-area attorney of Spotlight fame, is representing the alleged victim in the case we discuss now. He said that the young man has “shown a tremendous amount of courage in coming forward. Let the facts be presented, the relevant law applied and a just and fair verdict rendered.”