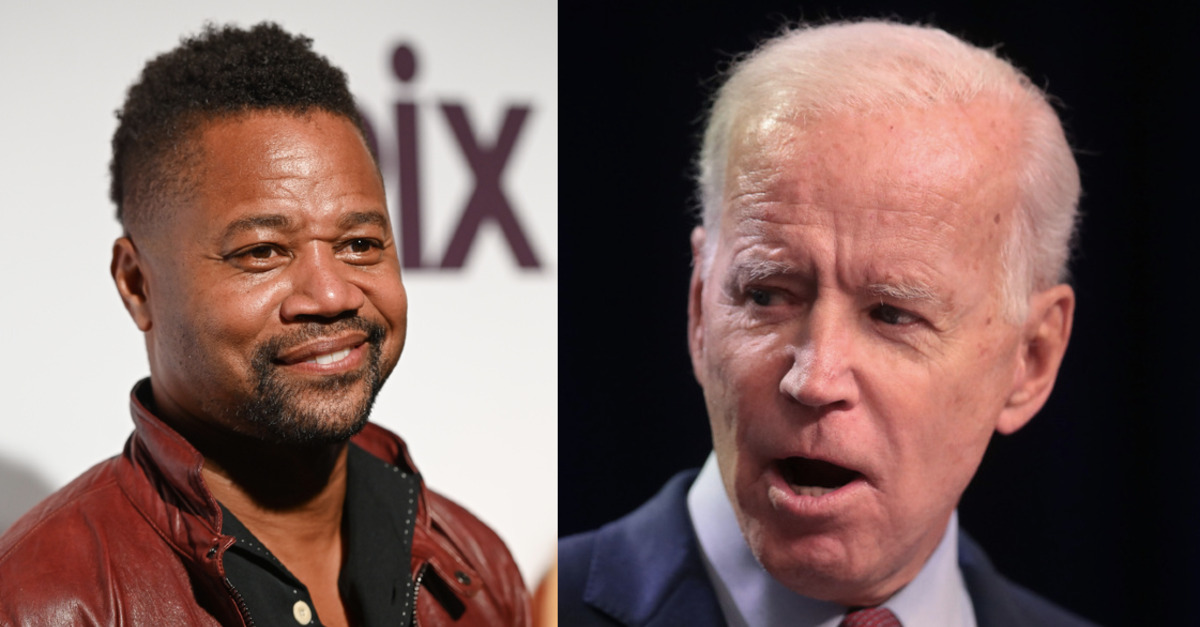 Academy Award-winning actor Cuba Gooding Jr. could face over one dozen women accusers at his upcoming trial on sexual misconduct charges in Manhattan.

Part of his defense strategy? Saying: “Joe Biden did it, too.”

Known for his work on the film Snow Dogs, Gooding is accused of forcibly groping a woman’s breasts and pinching another’s backside without their consent at New York City nightclubs in months past.

Each incident is being charged as one count each of misdemeanor sexual abuse and forcible touching.

Manhattan prosecutors previously alleged Gooding groped a 29-year-old woman’s breasts while at the Magic Hour Rooftop Bar & Lounge in Times Square in June. After that alleged incident, they got into what the woman called an “argument,” she then left and called 911.

In an unsealed indictment, prosecutors filed additional charges of misdemeanor forcible touching and misdemeanor sexual abuse against the 51-year-old actor. During Tuesday’s courtroom arraignment, Gooding pleaded not guilty to all four charges.

The indictment alleges Gooding “pinched the buttocks” of a woman “without her consent” while the two were at TAO Downtown Nightclub in the lower Chelsea neighborhood in October 2018.

The second woman, who is also not being identified by authorities, says that when she confronted the Jerry Maguire star he “claimed that he had only pinched her back, not her buttocks.”

One woman claims Gooding bit her shoulder before thrusting his pelvis against her leg and trying to lift up her skirt. Another woman claims Gooding grabbed her by the arm as she walked past him, put his hand inside her blouse; then squeezed her breast as he said something to the effect of: “Sit on my face; pee in my mouth.” Each of those incidents allegedly occurred in Los Angeles.

Another woman claims Gooding squeezed her inappropriately on her backside while the two posed for a photo in Long Beach. Yet another accuser claims Gooding non-consensually reached under her skirt and touched her vagina over her underwear while at a club in Malibu.

“Cuba denies all of these allegations,” the star’s defense attorney Mark Heller told gossip outlet TMZ. “This is a typical scenario in which random people come out of the woodwork to accuse a celebrity who has already been charged. They have no credibility because Cuba was not charged with any of those allegations.”

Gooding’s defense attorney called the four-count indictment “a distorted overreaction pandering to the current hypersensitive climate where an innocent commonplace gestures are now misperceived and mischaracterized as offensive.”

The accusations, Heller said, are akin to the “incredible condemnation” Biden faced after touching “a woman’s shoulder.”

“It has been 124 days since the arrest of Cuba Gooding Jr. and in my opinion the District Attorney’s office has tormented Mr. Gooding, knowing that his life and his career has been put on hold and cooly delaying this prosecution,” Heller said in court.