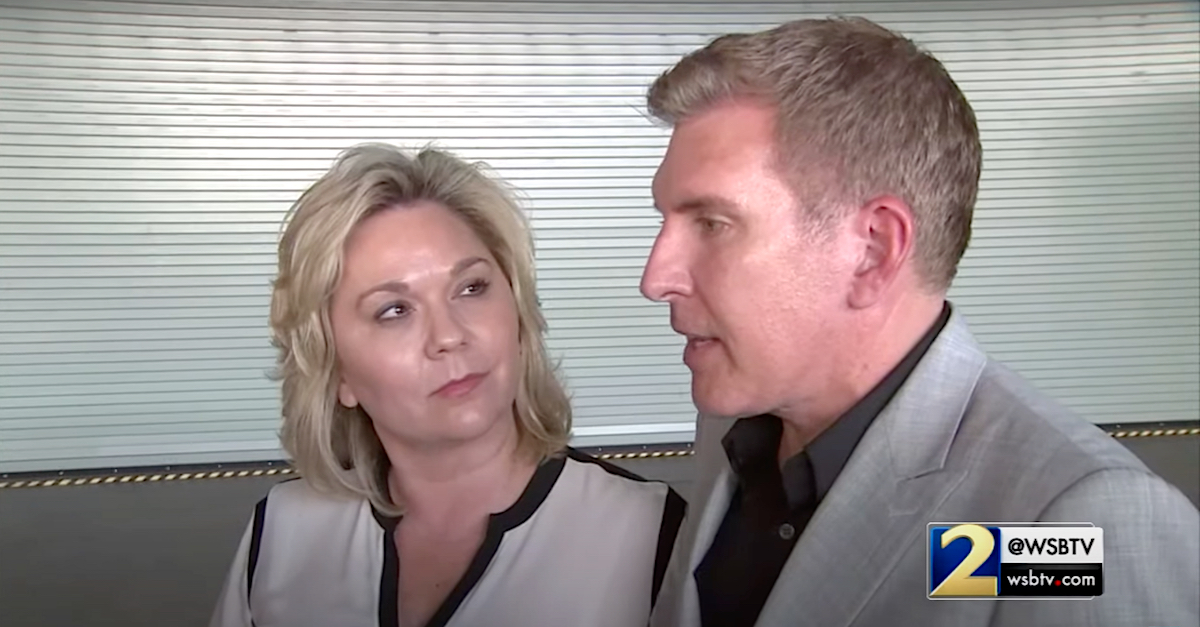 The stars of the reality television show Chrisley Knows Best have been sentenced to federal prison for what prosecutors describe as a sweeping set of multi-million dollar financial crimes.

A jury convicted Todd and Julie Chrisley of “conspiring to defraud community banks out of more than $30 million of fraudulent loans” after a three-week trial federal prosecutors wrote at the time.

The verdict form on file in the Northern District of Georgia indicates that a jury considered the defendants guilty as charged. They were not acquitted of a single count.

In a sentencing memorandum, prosecutors said federal sentencing guidelines suggested 17.5 to nearly 22 years in prison for Todd Chrisley and roughly 10 to 12.5 years for Julie Chrisley.

Prosecutors said the defendants were recalcitrant.

“The Chrisleys have objected to nearly everything in their PSRs [pre-sentence reports],” prosecutors wrote in a whopping, unordinary, and voluminous 71-page sentencing memorandum. “Most of their objections are attempts to re-interpret the evidence from trial and re-argue that the testimony and evidence from their witnesses should be credited, despite the jury’s unanimous verdict.”

Prosecutors elsewhere wrote that the Chrisleys were “driven by greed” during their “decade-long fraud spree” and that their “arrogance merits special consideration.”

“Most fraud schemes unfold in a familiar manner: A defendant commits one fraud scheme for a period of time, gets caught, and is prosecuted,” the sentencing memorandum pointed out. “The Chrisleys are unique given the varied and wide-ranging scope of their fraudulent conduct and the extent to which they engaged in fraud and obstructive behavior for a prolonged period of time.”

“Ironically, the legitimate money that the Chrisleys earned . . . came from managing foreclosed properties following the Great Recession,” prosecutors went on. “The Chrisleys may believe their tax evasion was a victimless crime, but the consequences are felt by all taxpaying Americans.”

In his own memorandum, Todd Chrisley argued that the “correct guidelines and sentencing range is much lower” than what prosecutors suggested. That memo was replete with gushing and glowing character references: “I thank God every day that he blessed me with the opportunity to have Mr. Chrisley to be part of my life,” “They are all genuinely kind, good hearted, God fearing people, a rare commodity in this day and age,” etc.

In the end, the judge did not agree with the sentence suggested by prosecutors.

The constabulary connected to the case immediately piled on in a round of rebukes after the sentences were handed down.

“Over the course of a decade, the defendants defrauded banks out of tens of millions of dollars while evading payment of their federal income taxes” U.S. Attorney Ryan K. Buchanan of the Northern District of Georgia said in a statement. “Their lengthy sentences reflect the magnitude of their criminal scheme and should serve as a warning to others tempted to exploit our nation’s community banking system for unlawful personal gain.”

“As this sentencing proves, when you lie, cheat, and steal, justice is blind to your fame, fortune, and position,” said Keri Farley, Special Agent in Charge of FBI Atlanta. “The FBI is proud to work with our law enforcement partners at the IRS and the U.S. Attorney’s office to pursue and prosecute individuals that are driven by greed to evade the law.”

“The Chrisleys defrauded financial institutions and the Federal Government through tax evasion and other fraudulent means in an effort to minimize their tax liability, but project an image of wealth,” said James E. Dorsey, Special Agent in Charge, IRS Criminal Investigation, Atlanta Field Office. “This sentencing serves notice that no matter a person’s celebrity status, there are severe consequences for defrauding the American tax system.”

Prosecutors convinced a jury that the Chrisleys “conspired to defraud community banks in the Atlanta area to obtain more than $36 million in personal loans.”

To wit, according to a Department of Justice press release:

The Chrisleys, with the help of their former business partner, submitted false bank statements, audit reports, and personal financial statements to Georgia community banks to obtain the loans. The Chrisleys spent the money on luxury cars, designer clothes, real estate, and travel – and used new fraudulent loans to pay back old ones. After spending all the money, Todd Chrisley filed for bankruptcy and walked away from more than $20 million of these fraudulently obtained loans.

The DOJ said the Chrisleys didn’t file tax returns or pay taxes in 2013, 2014, 2015, or 2016 and that Tarantino filed two “false corporate tax returns for the loan-out company, which falsely claimed that the company earned no money and made no distributions in 2015 and 2016.”

Once an investigation began, the DOJ said the Chrisleys “attempted to obstruct justice before being charged as well as during the trial.”

“After learning of the grand jury investigation, Julie Chrisley submitted a fraudulent document in response to a grand jury subpoena to make it appear that the Chrisleys had not lied to the bank when they transferred ownership of the loan-out company’s bank account to their relative,” the DOJ noted.