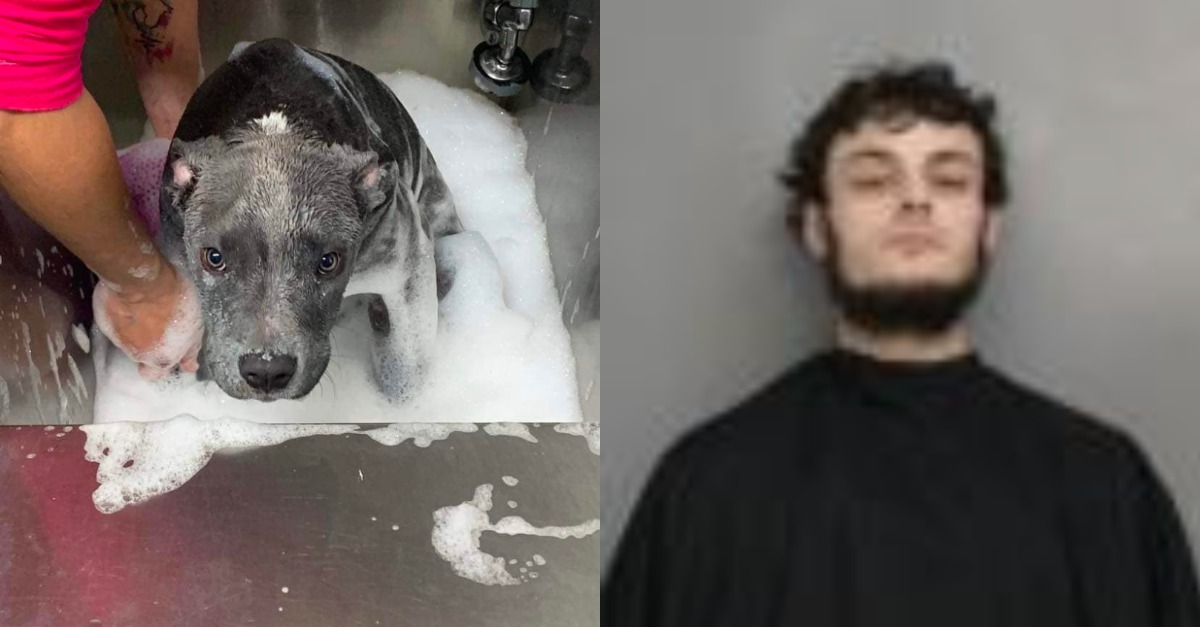 A 22-year-old man in South Carolina will spend several years behind bars after he admitted to torturing a 5-month-old dog by screwing the puppy’s paws into his bathroom doorframe with a power drill.

Jerdo last week pleaded guilty last week to the ill-treatment charge, as well as one count each of resisting arrest, failure to stop for law enforcement, and possession of methamphetamine with the intent to distribute. In addition to the four-year prison sentence, Judge Griffith handed down a multi-year suspended sentence and three years of post-release supervision upon completion of Jerdo’s incarceration.

Jerdo, who has been held in detention without bond since his arrest in late February, was credited with 266 days of time served towards his sentence.

“This incident not only traumatized the poor animal he abused but traumatized the entire community of people who love and care for animals and had to read the shocking facts of this terrible case,” Solicitor Kevin Brackett, who prosecuted the case, said, according to a report from Myrtle Beach NBC affiliate WMBF-TV. “Our pets provide us with so much joy and companionship and expect so little in return. To have such a small and helpless animal treated so cruelly and callously defies the imagination. I am gratified that Judge Griffith imposed a sentence that not only speaks to the horror of this case, but serves as a warning that the legal system will stand up for defenseless animals when they are abused.”

As previously reported by Law&Crime, the Union County Sheriff’s Office (UCSO) said that a county employee on Friday, Feb. 25, 2022 flagged down a deputy after leaving Jerdo’s residence. That employee allegedly told law enforcement that Jerdo was “under the influence of something strong” and that the man’s dog was screwed to the wall of a barricaded bathroom.

Multiple deputies and animal control officers responded to the location and were allegedly met by Jerdo’s mother, who owns the property, and allowed them access when they requested to enter.

Deputies said they found a horrific display of animal cruelty inside.

A 5-month-old puppy named Asher was reportedly visible behind a large pile of items, according to one deputy, and so was the poor animal’s perilous state: one of his paws was screwed to the frame of the bathroom door.

Law enforcement began removing the items to access the dog and removed the screw from his paw with a drill. Still, the bathroom door would not open, so a deputy went around the side of the house, removed a screen from a window and climbed into the bathroom. That’s when deputies realized that Asher’s other paw was also screwed to the inside of the door frame.

According to the UCSO, the second screw could not be removed from the paw because it was too deep and the head of the screw couldn’t be accessed. Deputies were then forced to pull the dog’s paw through the screw before taking him to a local clinic for treatment.

Eventually, a truck driven by the defendant pulled into the driveway. Deputies said they told Jerdo he was under arrest as he exited the vehicle. A deputy admittedly placed hands on the suspect when Jerdo began to argue, authorities said.

After an apparent scuffle with multiple members of law enforcement — during which the defendant was tased twice — Jerdo was handcuffed and placed inside of a deputy’s vehicle.  According to the UCSO, that didn’t last long.

While some deputies went back inside the house to collect additional evidence, they heard a scream from outside. Jerdo had escaped from the back of the car and was trying to flee the scene entirely but was being held back by other deputies, authorities said. During this second go-round, the defendant allegedly headbutted a deputy in their forehead. He was finally subdued and taken into custody, where he is slated to remain for a period of years.

The dog, which appears to be a pit bull or pit bull mix, was treated at a local animal clinic. Renamed Liam, the dog has since been adopted by a loving family, WMBF reported.