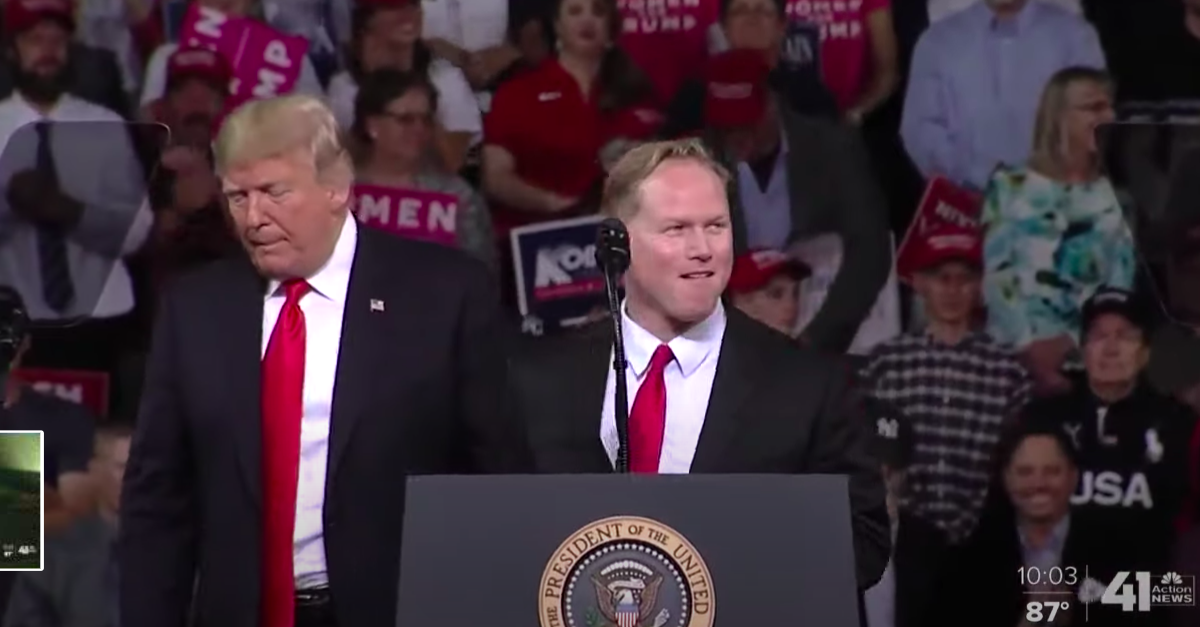 Steve Watkins speaks at a rally with President Donald Trump at the Kansas Expocenter on October 6, 2018 in Topeka, Kansas.

Kansas prosecutors on Tuesday announced that freshman U.S. Rep. Steve Watkins, 43, was being charged with multiple felony counts stemming from his alleged use of a United Parcel Service (UPS) storefront address on his voter registration in a 2019 local election.

Shawnee County District Attorney Mike Kagay filed the charges against Watkins, which include three felonies: voting without being qualified, unlawful advance voting, and interference with law enforcement involving providing false information. He also faces one misdemeanor count of failing to notify the Department of Motor Vehicles of a change of address.

Kagay’s investigation stemmed from a December report in the Topeka Capital-Journal which revealed that the address listed as Watkins’s official residence on an August 2019 change-of-address form was in fact a UPS store in Topeka, Kansas.

Later that year, the congressman signed an application to receive a mail-in ballot that allowed him to vote in a district city council race that was decided by only 13 votes, according to an NPR report.

Watkins, who faces an Aug. 4 primary challenge from two other Republicans for his seat representing Kansas’s Second District, maintained his innocence on Tuesday, telling the Capital-Journal that the charges — which were filed less than an hour before the candidates first televised debate — were “hyperpolitical” and “very suspicious.”

In December, the congressman’s chief of staff, Jim Joice, told the Capital-Journal that Watkins simply filed his change of address “incorrectly” and said questions about his residency were “a little ludicrous.”

The campaign on Tuesday evening had a similar response to the felony charges, insinuating that one of Watkins’s GOP opponents had played a role in what transpired.

“Give us a break,” Watkins’ spokesman Bryan Piligra told Politico. “Thirty minutes before the first televised debate and the day before early voting starts, the DA — who shares a political consultant with our primary opponent Jake LaTurner — files these bogus charges. They couldn’t have been more political if they tried.”

During Tuesday evening’s debate, Watkins addressed the charges, saying he had immediately corrected the error.

“I haven’t done anything wrong. As soon as I realized that I had put my mailing address instead of my physical address, we fixed it,” he said, adding that he had cooperated with the district attorney “completely.”

LaTurner, on the other hand, said the charges effectively ended Watkins’s re-election campaign.

“It’s safe to say that this is now a two-person race,” LaTurner said. “The reality is Steve Watkins needs to take responsibility for what he’s done.”