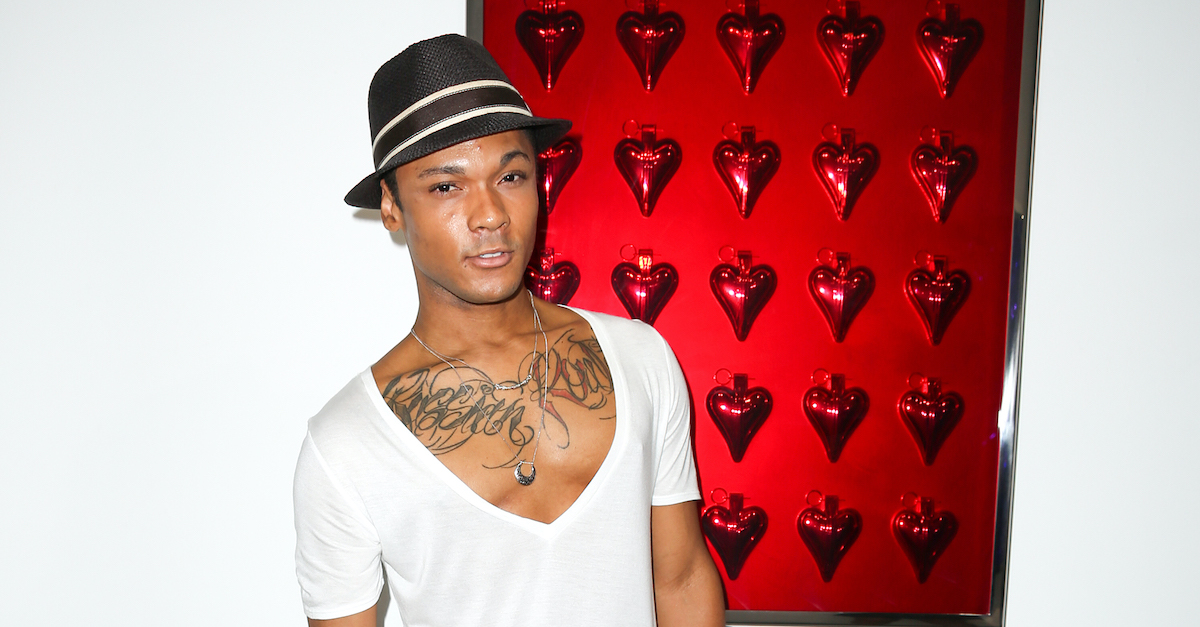 Just months after allegations against Harvey Weinstein propelled the #MeToo movement to national recognition, an aspiring reality TV star and writer named Rovier Carrington filed a roughly $50 million lawsuit against other major producers Brad Grey and Brian Graden in May 2018. The suit also sought $100 million in punitive damages against Viacom. Carrington, describing himself as “Hollywood royalty” by way of his self-proclaimed lineage, claimed the executives sexually assaulted him and then defrauded him by refusing to produce his reality TV program.

The 32-year-old voluntarily dismissed that lawsuit early the next year, and the men whom he accused won an award of sanctions against him.

In imposing costs, U.S. District Judge Katherine Polk Failla found that “these emails were fabricated,” a fact that was “bad enough” before being made worse by Carrington’s cover-up and “stream of lies” to the court, according to the complaint.

But the termination of Carrington’s case and civil penalty did not end his woes.

The Los Angeles resident was arrested on Tuesday and hauled before a judge in the Central District of California, where he awaited transfer to the Southern District of New York—the jurisdiction where he filed his ill-fated lawsuit—to face a count of perjury.

At the heart of the criminal charges are what prosecutors describe as “ten fraudulently altered email chains.”

The criminal complaint liberally quotes from the exchanges, including one dated April 2011 that invoked Weinstein, whom Carrington also sued in a California case that he voluntarily dismissed this past February.

“I need your help,” Carrington allegedly told an unnamed counter-party in a message prosecutors call fraudulent. “I’m not built for this. [third party] has threaten me and [Executive-1] thinks I’m supposed to constantly sleep with him for my projects. I was promised my series and reality show would make the studio a lot of money. [Third party] is a piece of shit and a pimp. I’m not a whore. After this Harvey [Weinstein] bullshit. I’m done.”

“Trend my man,” the counter-party purportedly replied. “You have to obey [third party] if you plan on continuing. [Executive-1] has ruined your chances after that Harvey [Weinstein] shit. I understand screwing these Hollywood fucks is tough but it’s that Hollywood shit man.”

In another allegedly fabricated email chain dated January 2011, Carrington accuses one of the executives of assault.

“My mind is scrambled after last night,” Carrington allegedly wrote. “I can’t remove ‘Our Jewish bodies’ and ‘Call me [Executive-1]’ from repeating in my head. I can’t properly sit down after being viciously assaulted yet again by that twosided shit [Executive-1]. This was too far. Too damn far. I have cuts on my face and thighs from him forcing himself into me. That bastard can’t take NO for an answer and he remains using his title to force himself onto me.” 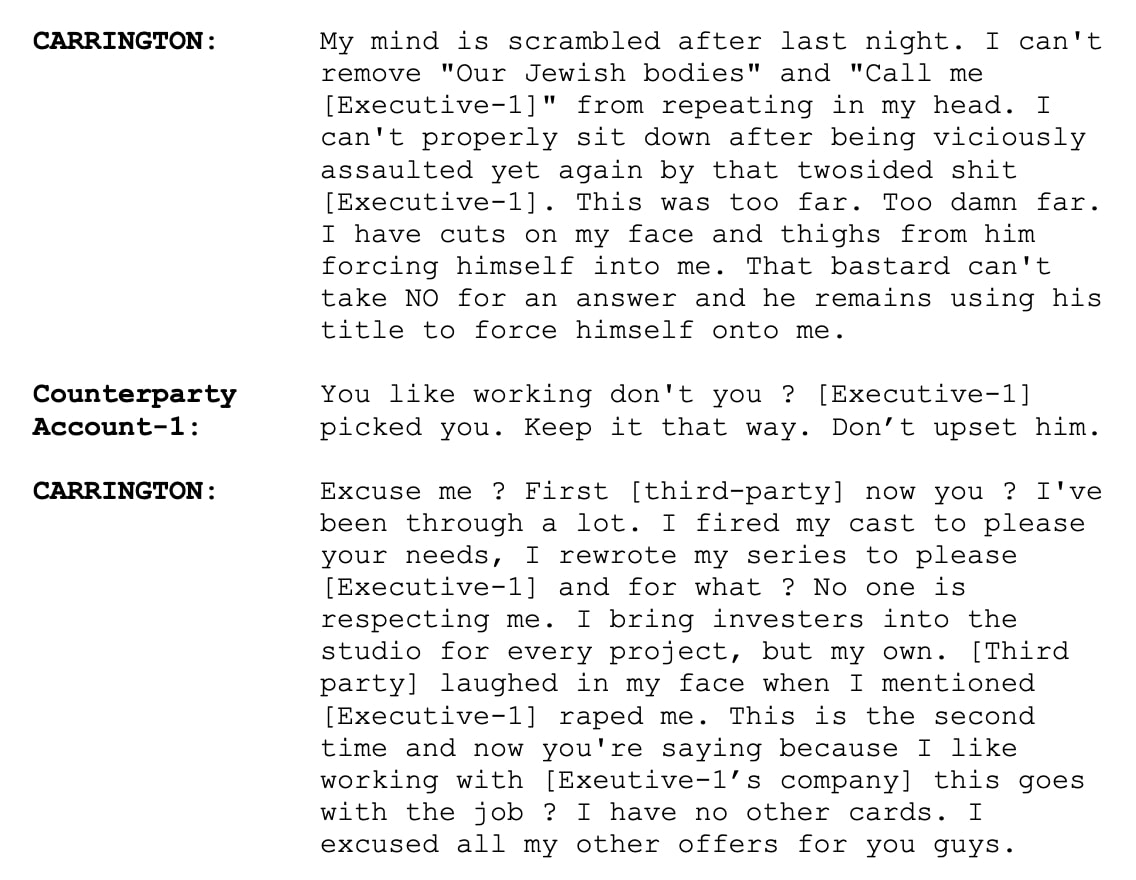 Prosecutors claim that Carrington created a phony blacklisting claim in another fake exchange.

“I’m consirdered [sic] the enemy now, given all the phone calls I’ve received from several HR people at [Executive-1’s company],” his purported email read. “What will not occur is me signing a form that basically states nothing morally disturbing was endured. Also, If [third party] thinks he can mute me like the others with an envelope filled with cash driving by his personal driver, he’s sadly mistaken. I get assaulted two-days ago at the ‘Super 8’ premiere by [Executive-1] who’s been stalking me prior to this. Did [Executive-1] tell you he shows up at my place begging for me to be his private Boyfriend ? and say’s, ‘If I cared about my career I’d obey’ ? He threaten my career becuase [sic] I want to work and not fly private with him or attend art museums when his trophy isn’t there. This dude is newly married and doesn’t comprehend he forces himself onto me. [Executive-1] clearly knows he’s crossed the line after spitting in my face and grabbing my genitals while relaying ‘I’ll never work again’. The others in the room saw everything. Fix this [Counterparty-1]! I’m not signing anything or taking this shit after being sexually abused by [Executive-1] or that other asshole.”

The counterparty supposedly replied: “Trend! Blacklisting is real. I told you not to upset these Hollywood fucks.”

Carrington included these supposed exchanges, and others, as exhibits to a lawsuit, attesting to their authenticity under penalty of perjury, prosecutors claim.

According to the complaint, an e-discovery vendor and search warrants executed on the email accounts further confirmed the emails were not authentic.

Carrington’s civil attorney G. Scott Sobel did not immediately respond to Law&Crime’s press inquiry. His criminal case did not appear to have been docketed by press time.

(Photo by Rochelle Brodin/Getty Images for De Re Gallery)