Reporter Asks McConnell Why There Was No Public Debate on Largest Bill in U.S. History. He Says, ‘Do You Work Here?’ 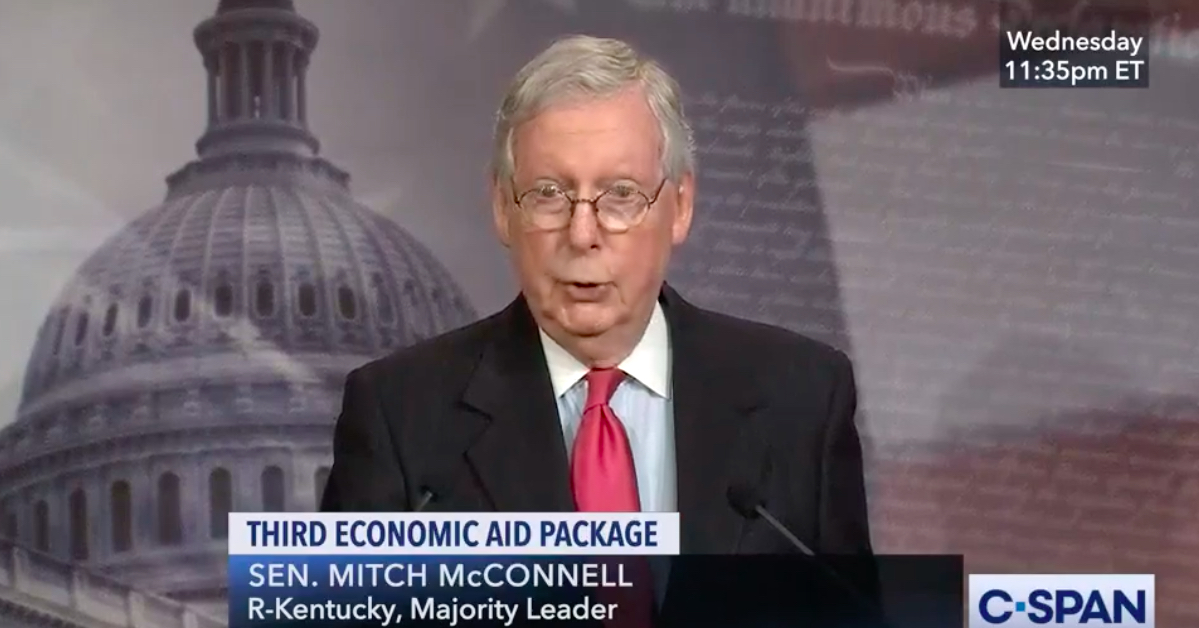 The Senate on Wednesday evening was finally able to put aside the partisan rancor and agree on a $2 trillion emergency relief bill aimed at addressing the unprecedented economic crash caused by the outbreak of the novel COVID-19 coronavirus in America. But immediately after helping steer bipartisan negotiations to pass the largest financial aid package in U.S. history, Senate Majority Leader Mitch McConnell (R-Ky.) riled his critics with his response to a female reporter who had asked why there wasn’t any public debate on the bill.

Speaking to reporters just before midnight on Wednesday, McConnell said that he was proud that members were able to pivot from “one of the most contentious, partisan, periods in the nation’s history” and pass the aid package. He then fielded questions.

“Understanding that of course this is a crisis and time is of the essence, this vote began and the public had not yet seen the bill,” the reporter began. “Lobbyists had seen the bill and none of the debate had been held in public – there is virtually no public debate on what looks to be the largest bill in American history. Can you explain why that was and should the public have had more time to understand what this bill is that is meant to help them?”

Reporter: "There was virtually no public debate on what looks to be the largest bill in American history. Can you explain why that was and should the public have had more time to understand what this bill is that is meant to help them?"

“Do you work here?” McConnell shot back.

She barely had time to finish saying “Yes sir,” before McConnell interjected.

“Yeah, we’re the elected representatives of the American people,” he stated.

“I’ll walk you through it again,” he added, saying the process was “about as flawless as you could expect it to be.”

The bill entails huge loan programs for both big and small businesses weathering the pandemic; more than 150 million households will receive checks to inject life into an otherwise cratering economy.

Despite lauding the process on Wednesday, McConnell had grown visibly frustrated during negotiations earlier in the week, with several congressional reporters on Sunday saying he was as angry as they’d ever seen him.

This is about as pissed off as I’ve seen McConnell on the floor.

McConnell irate on the Senate floor after Democrats block motion to proceed to stimulus bill: "Look, I can understand obstruction when you're trying to achieve something. This obstruction achieves nothing."