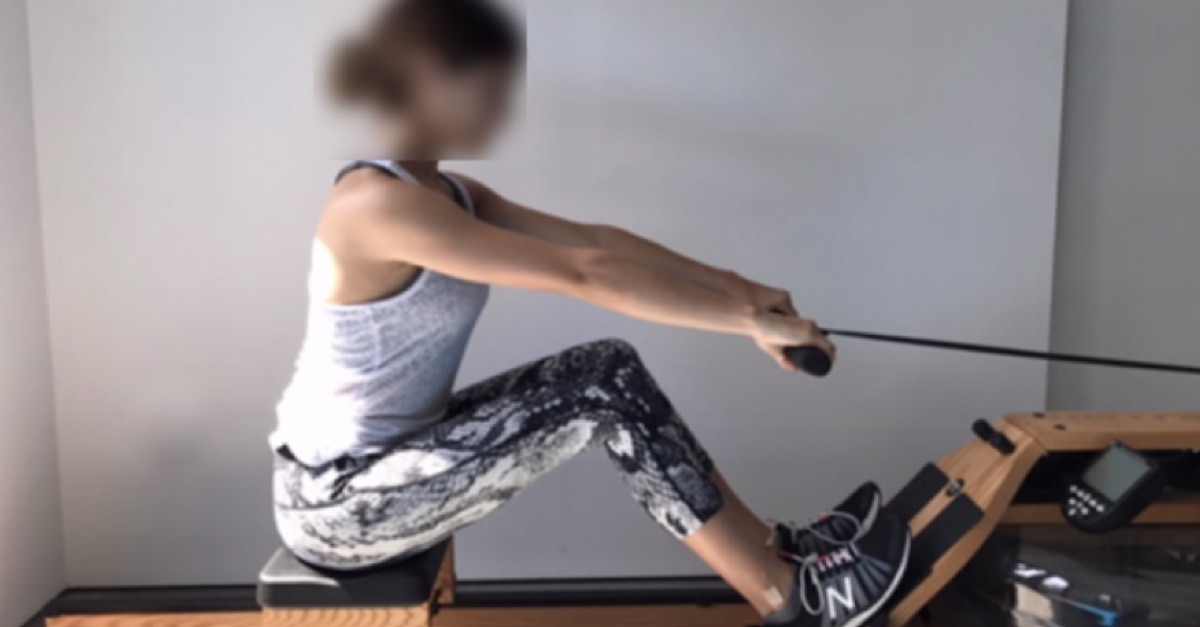 Federal prosecutors this week admitted an “error” was made in their college admissions scandal prosecution of wealthy parents Lori Loughlin, an actress, and Mossimo Giannulli, a fashion designer. That admission came after defense attorneys slammed the feds for withholding evidence. This week’s small defense victory was quickly outshone, however, by the hundreds of pages worth of exhibits filed in open court by the feds, many of which were embarrassing for the defendants. The evidence includes notes about a heated conversation, described as an “agitated stream of consciousness” from Giannulli, which required closed doors at his daughter’s high school and ended with a counselor being pressured to repeat Giannulli’s assertion that his daughter was on a crew team — depsite the high school’s own records saying she was not.

Loughlin and Giannulli are two of the parents accused of multiple federal crimes in what the federal government called “Operation Varsity Blues.” The fake rowing profiles that were created to get their daughters Isabella Giannulli and Olivia Jade Giannulli into the University of Southern California have long been spoken of, but images from those profiles have now been included in the court docket. The fake rowing claims, evidence shows, were a particularly touchy subject for Mossimo. 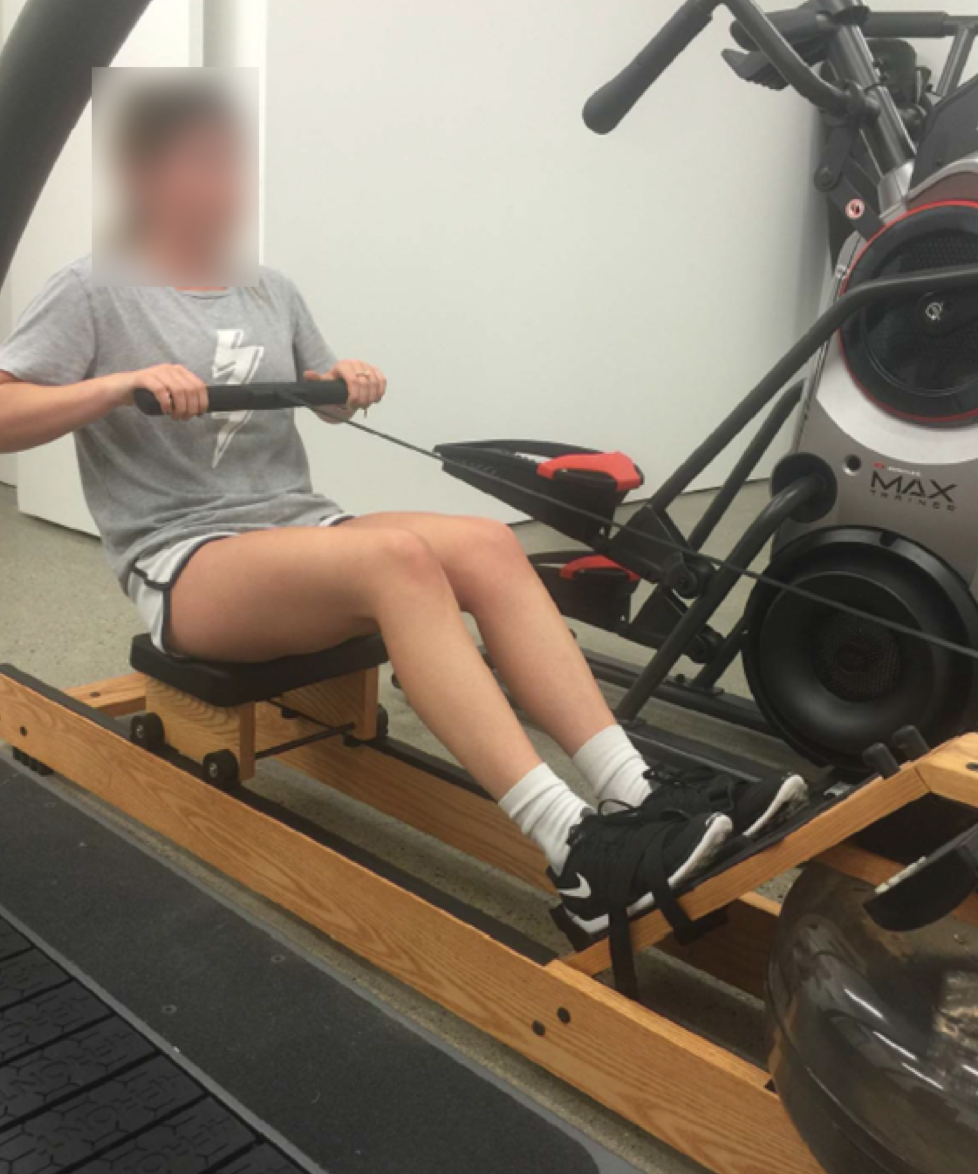 The power couple was accused from the start of creating fake rowing profiles to get their daughters USC, “agree[ing] to pay bribes totaling $500,000 in exchange for having their two daughters designated as recruits to the [University of Southern California (USC)] crew team–despite the fact that they did not participate in crew.”

Since that time, they and other parents have been hammered with more and more charges. Loughlin and Giannulli face 12 criminal counts, including conspiracy to commit mail and wire fraud and honest services mail and wire fraud; conspiracy to commit federal programs bribery; money laundering conspiracy; wire fraud and honest services wire fraud; aiding and abetting; federal programs bribery; aiding and abetting. All of that adds up to a technical possible punishment of decades behind bars.

That will likely never happen, but evidence produced by the government suggests that Mossimo was well aware that what he is said to have done was not on the up-and-up.

Exhibit AA (page 115 et seq.) contains a counselor’s account of a confrontation with Giannulli.  Giannulli was apparently upset that the counselor had put his daughters’ futures in jeopardy. It shows how nervous he was about the fake rowing profiles being exposed. Based on the timing of the events described (Olivia Jade graduated from Marymount High School in 2018), the following is a high school counselor’s perspective on the application process.

In March 2018, the counselor said that they “[c]onducted routine counselor call with USC to check up on the dozens of applicants, again, that year. When we got to [Olivia] our representative, [redacted] said she was ‘flagged’ as a recruit for the crew team. I told him I had no knowledge of [Olivia’s] involvement in crew and based on what I knew of [Olivia’s] video blogging schedule highly doubted she was involved in crew. [Redacted] then confirmed that [Olivia] is [Isabella’s] sister, which is true, and that we had discussed as a crew recruit in 2017. ”

“We had discussed this. I told [redacted] that I had knowledge of the Giannulli Family working with an independent college counselor who had some other clients at [redacted] who caught the attention of another admission office because there were inconsistencies or seemingly false claims in their applications,” the counselor’s notes continued. “[Redacted] said he was going to look into the situation further with his supervisors and the Athletics Department.”

Fast forward to April 11th. That’s when the counselor detailed a conversation with “[redacted]” about the “independent college counselor the Giannulli Family was working with,” who is almost certainly William “Rick” Singer — the admitted mastermind of the college admissions scam. “[Redacted]” had “encountered another situation where an applicant from the Bay Area was flagged as an athletic recruit, but there was no evidence of prior serious or exceptional participation in the sport they were recruited to play,” the counselor noted.

The very next day, a ticked off and “curt” Mossimo Giannulli showed up at his daughter’s school. The counselor recalled:

“I received a call from the front desk that Mr. Giannulli was downstairs looking for [redacted], our Head of School, who was off campus, and wanted to talk to me. I had a feeling this was regarding the conversation I had with [redacted] the day before. I had not seen Mr. or Mrs. Giannulli in my office since we had our family meeting for [one of their daughters, not clear which] two years prior. I went down to receive him and bring him upstairs to my office. While we were headed to my office I asked if he had walked over or drove, they live very close to campus.”

It went downhill from there.

“Mr. Giannulli replied, ‘What does it matter?’ in a curt tone. I said I was just making conversation, he replied, ‘Let’s not.’ When we sat down in my office he aggressively asked what I was telling USC about his daughters and why I was trying to ruin or get in the way of their opportunities. I asked him to clarify what he meant.”

Giannulli was concerned that the counselor had done something to mess things up. His “tone” caused the counselor to become “visibly nervous,” the person said.

“Mr. Giannulli backed up and asked what I had told USC in 2017 about [his daughter Isabella, based on context]. His tone made me visibly nervous. I told him that I had conducted a routine counselor call with USC, I was informed that [Isabella] was identified and admitted as a recruited athlete for crew, had replied that I had no knowledge of [Isabella] being a rower, but did not in any way contest her admission decision,” the counselor said. “He then asked if I had said [Isabella] was not a good admit for USC and said she was currently thriving at USC. I told him I was happy to hear that, but had never told USC she was a bad candidate for admission, just that I had no knowledge of her being a rower.”

The encounter was apparently loud and confrontational enough that the Co-Director of College Counseling closed the office door because “our voices were carrying down the hall.”

“Mr. Giannulli then had me recount what I had told USC about [unclear which daughter]. I told him I conducted the same routine counselor call with USC a few weeks prior, they had identified [Olivia] as a recruit for crew too, and I said I had no knowledge of her involvement as a rower,” the rattled counselor said. “Mr. Giannulli then interrupted and bluntly stated that [Olivia] was a coxswain. I told him I was unaware of that and I would have to inform them. He then asked about my conversation with USC the day before. I told him that USC had called me to inquire about an independent counselor [Rick Singer] who was seemingly making false claims about applicants’ athletic involvements to leverage positive admission decisions for them.”

The mention of Rick Singer appears to have triggered Giannulli—big time:

Mr. Giannulli then went into an agitated stream of consciousness stating he could not believe I had put [Isabella’s] admission to USC at risk in 2017 and how annoyed he still was that I could not combine her [redacted] grades with [redacted] grades for a recalculated GPA on her transcript. (This is not the practice of [redacted] or any other private school I know of; only classes taken at the school which generates the transcript appear on that transcript. A separate transcript from each high school attended is sent to the colleges to which a student applies.) Mr. Giannulli said he let that go though, but was astounded when I had endangered [Olivia’s] admission to USC this year. He then said [redacted, but presumably Olivia] had no idea about this situation and would be crushed if she had any knowledge of it. He then asked me if I had any idea who was and what she had going for her. I told him I was well aware of her YouTube channel and video biogs regarding style, make-up and fashion. I then went on to affirm that I had been a champion for [Olivia] and if he were to read my letter of recommendation he would see that I portrayed [Olivia] as a guru in her field with a bright future and any school would be happy to have her.

“I then firmly stated that I had not done any such thing, I had not put his daughters in jeopardy, and insinuated that the person presenting them as rowers had done that. Given Mr. Giannulli’s angered state I did not want to say that outright making an accusation,” the counselor said, tellingly. “Mr. Giannulli still pushed on why I acted as I had and I stated that ‘it was my job to ensure there is integrity in this process,’ referring to the college admission process. I have my professional reputation, that of [redacted] and of every past or future graduate on the line when I make a statement or claim.”

The counselor said Giannulli shook their hand after they assured him they would contact USC and say Mossimo told them Olivia was a coxswain.

“I immediately reached out to [redacted] to let her know about the interaction I just had with Mr. Giannulli. [Redacted] had me contact our Athletics Department to look for records of either Giannulli girl being a rower, we had none,” the counselor said. It is unclear who the counselor contacted, but the context suggests it was someone within their high school. “I then also tried to call [redacted at USC], he was unavailable, so I emailed him saying I had new information about [Olivia].”

After that occurred, the counselor informed Giannulli about the call. Rather than being curt and intimidating, he was thankful.

“After that phone call with I emailed Mr. Giannulli to let him know: I had spoken to at USC and shared what Mr. Giannulli had told me earlier about being a coxswain, to assure Mr. Giannulli that admission to USC was never in danger, provide him with contact information if he had any other questions. I received a quick reply saying, ‘Thank you very much,'” the counselor noted.

There were a couple of other pieces of evidence that also indicated Mossimo Giannulli was aware he was working the system. For one, there was an email that said exactly that:

In another email, take note of the scare quotes around “donation.” 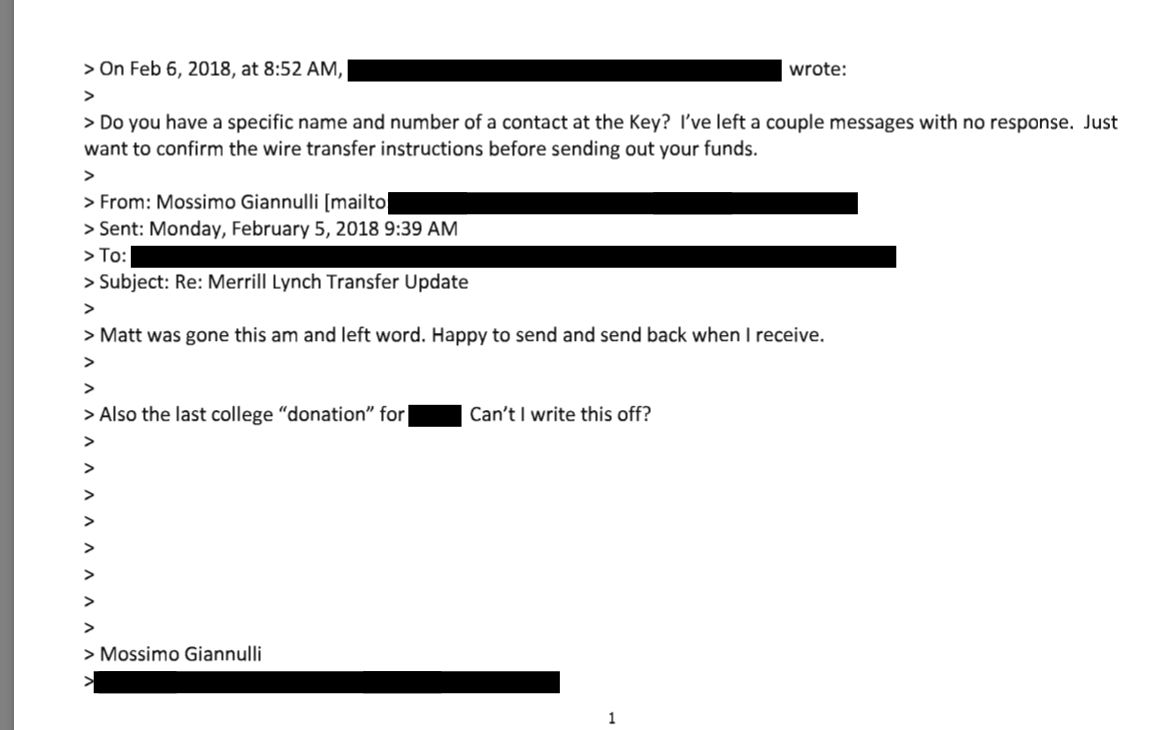 Another bit of evidence appears to show Mossimo Giannulli forwarding an email thread to Lori Loughlin of him “nicely” blowing off a USC employee in 2016 because he thought they were “squared away” already with Isabella’s application. 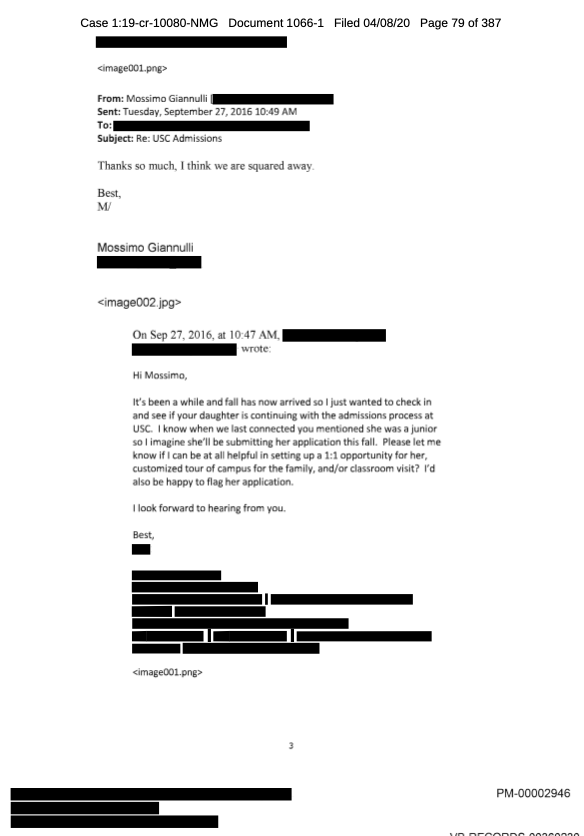 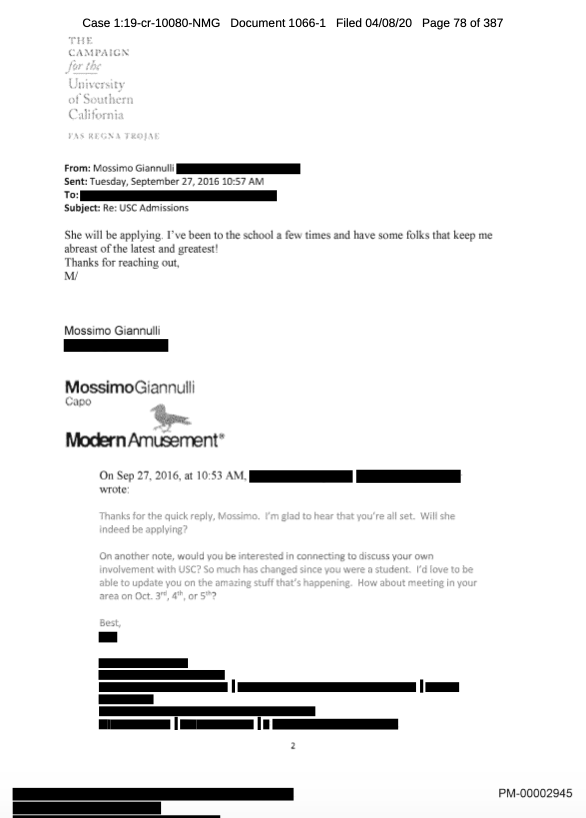 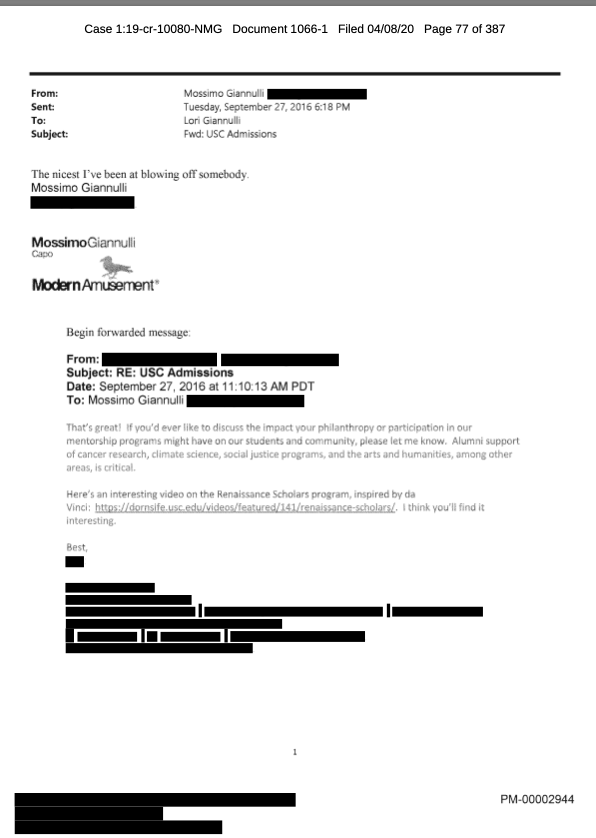 If you’ve made it this far, maybe you’ll be interested in what 387 pages of evidence have to say: