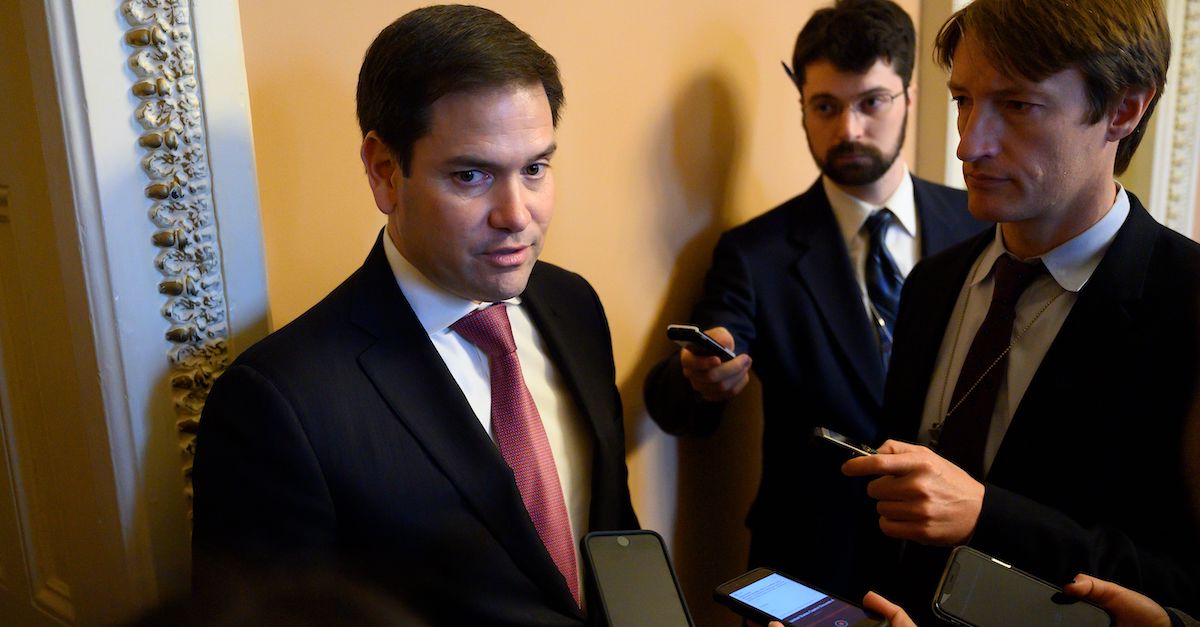 It’s Friday and Sen. Marco Rubio (R-Fla.) wants Fox News contributor Sara Carter to know that her website posted about a 17-month-old interview and made it look like he was defending the FBI in the wake of the Department of Justice Inspector General’s report on “Crossfire Hurricane.”

At the time, Rubio said, “I don’t think [the FBI] did anything wrong. I think they went to the court, they got the judges to approve it, they laid out all the information, and there was a lot reasons unrelated to the dossier for why they wanted to look at Carter Page.”

Rubio was not clearly happy that this interview resurfaced without additional context because his commentary about the FBI doing nothing wrong turned out not to be correct.

DOJ Inspector General Michael Horowitz found that the investigation was factually and legally justified and did not find that there was a political conspiracy at the FBI to take down Donald Trump. He also found and exposed numerous FBI errors and omissions in the FISA application process:

Among the most important are the requirements in FBI policy that every FISA application must contain a “full and accurate” presentation of the facts, and that agents must ensure that all factual statements in FISA applications are “scrupulously accurate.” These are the standards for fill FISA applications, regardless of the investigation’s sensitivity, and it is incumbent upon the FBI to meet them in every application. That said, in the context of an investigation involving persons associated with a presidential campaign, where the target of the FISA is a former campaign official and the goal of the FISA is to uncover, among other things, information about the individual’s allegedly illegal campaign-related activities, members of the Crossfire Hurricane investigative team should have anticipated, and told us they in fact did anticipate, that these FISA applications would be subjected to especially close scrutiny.

Nevertheless, we found that members of the Crossfire Hurricane team failed to meet the basic obligation to ensure that the Carter Page FISA applications were “scrupulously accurate.” We identified significant inaccuracies and omissions in each of the four applications-7 in the first FISA application and a total of 17 by the final renewal application.

We are deeply concerned that so many basic and fundamental errors were made by three separate, hand-picked investigative teams; on one of the most sensitive FBI investigations; after the matter had been briefed to the highest levels within the FBI; even though the information sought through use of FISA authority related so closely to an ongoing presidential campaign; and even though those involved with the investigation knew that their actions were likely to be subjected to close scrutiny. We believe this circumstance reflects a failure not just by those who prepared the FISA applications, but also by the managers and supervisors in the Crossfire Hurricane chain of command, including FBI senior officials who were briefed as the investigation progressed.

Horowitz’s findings included former FBI lawyer Kevin Clinesmith’s alteration of an email used in the renewal of an application for surveilling Page. That alteration resulted in a criminal referral against Clinesmith. A judge on the FISA court recently asked the FBI for information about every case Clinesmith touched and the Office of the Inspector General is conducting a broader audit of FBI surveillance.

In summary: the FBI did something wrong; they went to the court and got the FISA judges to approve the surveillance, but didn’t lay out all of the information.

Here’s where Sara Carter’s website comes in. Carter tweeted on Thursday, saying, “Marco Rubio told @CNN that he doesn’t think
@FBI investigators ‘did anything wrong’ when they applied for #FISA #surveillance on Carter Page. (Video).” With that tweet was a link to an article on her site, headlined, “Marco Rubio: FBI was justified to ask for FISA to surveil Carter Page” — which is actually what Horowitz concluded (Attorney General William Barr and John Durham publicly disagreed).

Rubio responded by unleashing a series of tweets, saying Carter pushed a “fake story” to “create [the] false impression” that he recently defended the FBI’s surveillance of Page.

.@SaraCarterDC that was over 17 MONTHS AGO not recently.

I “told” that to @CNN in July of 2018, almost a year & a half BEFORE anyone knew that an @FBI lawyer had altered emails & that agents misled the #FISA court.

Curious why you would make it look like a recent statement?

Maybe this is all just an honest & careless mistake.

But whether its innocent or deliberate posting a fake story & getting it onto newsfeeds by using twitter to drive traffic to the story is TEXTBOOK informational warfare.

“Maybe this is all just an honest & careless mistake,” he continued. “But whether its innocent or deliberate posting a fake story & getting it onto newsfeeds by using twitter to drive traffic to the story is TEXTBOOK informational warfare.”

If I was defending @FBI lying to #FISA court AFTER report from IG came out wouldn’t every major news outlet report it?

And why would a “story” try to make an interview from July 2018 look like it was a recent statement? #FakeNews doesn’t happen by accident. pic.twitter.com/nFSNQWz1qZ

.@SaraCarterDC when are you going to change your tweet & #FakeNews on your website so people know that my statement wasn’t recent, it was in July 2018, 16 months before ANYONE knew that an @FBI lawyer & investigators lied in their #FISA applications? pic.twitter.com/k4agFvO8hQ

“@SaraCarterDC that was over 17 MONTHS AGO not recently,” he continued. “I ‘told’ that to @CNN in July of 2018, almost a year & a half BEFORE anyone knew that an @FBI lawyer had altered emails & that agents misled the #FISA court. Curious why you would make it look like a recent statement?”

A “clarification and update” has been added to the story on Carter’s website:

Clarification and Update: After a letter to the editor from Sen. Marco Rubio, SaraACarter.com would like to clarify that the Rubio interview was conducted by CNN on July, 22, 2018. Due to a staff writer error, it should have clarified the date of the interview and contained the word Flashback in the headline.

Rubio was also invited on the Sara Carter Show to share his current stance.

[Image via Andrew-Caballero-Reynolds/AFP via Getty Images]